If you don’t know who Obi Toppin is at this point of the season, there is no hope for you as a college basketball fan.  Since the majority of America knows his name and what he’s done on the court, the talks about the Wooden Award are heating up with about a month to go until the season ends.  On a number of sports sites and articles, Obi Toppin is the favorite to win the Wooden Award.  Granted, he has not won anything yet, as players from other teams, such as Luka Garza (Iowa), Markus Howard (Marquette), and Myles Powell (Seton Hall), are getting a lot of media attention as well, especially Garza.  But on a majority of them, Toppin is the front runner to win the Wooden Award.  While that is a huge accomplishment, it is even more important to his team, who is looking to make a huge run come tournament time in March.

The Wooden Award is essentially the equivalent to the Heisman Trophy for college basketball.  It was first presented in 1977 to Marques Johnson of UCLA.  Over the years, players that we now know to be some of the greatest players of all time have won this prestigious award, such as Larry Bird, Michael Jordan, Tim Duncan, and Kevin Durant, just to name a few.  If Toppin were to win, he would join an elite company of players who have historically had great NBA careers.

With this award, it is curious to wonder how the teams that had the Wooden Award winner on them performed in the NCAA tournament.  Again, Obi has not won anything yet, but let’s just pretend that he is going to win the award since he seems to be the front runner on most analysts’ predictions.  Flyer fans are dreaming of Atlanta, and it’s fun to think about.  I’ve already talked about how far their offensive efficiency could take them.  If you want to read that article again or missed it, click here.

But how far can a Wooden Award winner take them?  I went back all the way to 1977 to do this research.  I listed the year, winner, team they played for, and the result of that team/how far they made it in the NCAA Tournament.  Check them out below: 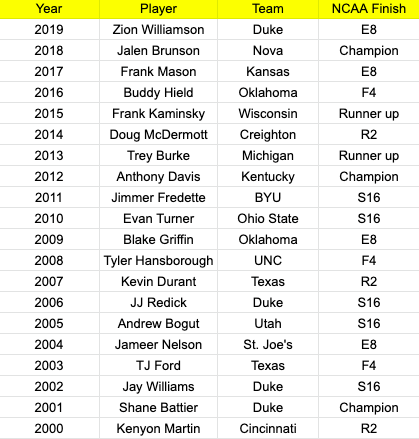 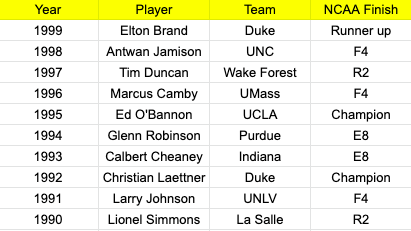 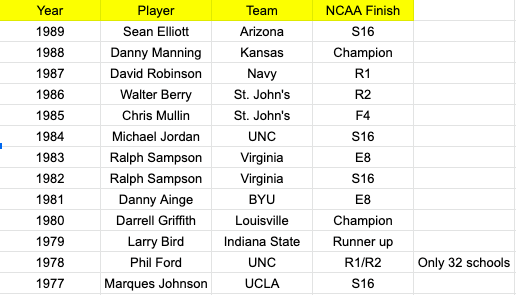 Onto the second round teams, we have only had 6 of those teams in the 42 year history of the award.  The most recent one was Dougy McBuckets’ Creighton team, who was a 3 seed and got drubbed by 6 seeded Baylor.  If you can believe it, Kevin Durant’s Texas team and Tim Duncan’s Wake Forest squad bowed out early too.  It has only happened 6 times out of 42, but still a possibility for Dayton.

For the sweet 16, 8 teams have made it to that first game of the second weekend before losing.  A few notable ones that shocked my memory were JJ Redick’s 2006 Duke team and Jimmer Fredette’s 2011 BYU team.  Not sure why I thought those teams made it further than they did. I remember that Duke team being really dominant, but I guess not.  Anyway, for the Elite 8, there are 7 teams that made it, most recently last seasons Duke team with Zion Williamson.  Two other notables were the Frank Mason Kansas team from 3 years ago, and Blake Griffin’s Oklahoma squad in 2009.

The one all Flyer fans are dreaming of is the Final Four.  In total, 17 teams with the Wooden Award winner have made the Final Four! That’s a lot and very exciting to think about.  Of those 17 teams, 7 teams lost in their Final Four game, most recently Buddy Hield’s 2016 Oklahoma team.  The number of teams to lose in the national championship game is 4, most recently Frank Kaminsky’s 2015 Wisconsin team.  Finally, the number of teams to win it all is 7, with the most recent winner being two years ago with Jalen Brunson and Villanova.