The Dayton Flyers are at the top of the A-10 and are a top 10 team in the country.  Those are both impressive, but what has been repeatedly talked about is how efficient Dayton is on offense.  The Flyers are currently, as of this writing, number 1 in the country in offensive efficiency according to Ken Pom.  If you didn’t know already, Ken Pom is one of, if not, the most highly regarded and referenced college basketball analytical websites in the country.  It has tracked data all the way back to the 2002 season.  It is honestly the best subscription to have if you are a college hoops junkie. For all intensive purposes of this article, all stats will be referenced from www.kenpom.com

As I stated before, Dayton is #1 in offensive efficiency, which basically means they score the ball the best out of all 353 teams in the country.  It is truly a great testament to how good they really are at scoring.  They have been sneaking up on previous #1 Gonzaga all season long, but the Flyers finally passed the Bulldogs last week to take the #1 ranking.

On twitter and throughout the college basketball world, the big debate is “What seed can Dayton get?”  As much as seeds are fun to talk about, they really do not matter at all.  The NCAA tournament is all about match-ups and how well the College Basketball God(s) match you up in the bracket.  The other debate going on is “How far can Dayton really go?”  Many think Dayton is a national championship/final four contender, which is valid, but is it just emotional reactions or results biased?  Well, let’s use stats and history to figure out what is actually realistic for the Flyers.

I decided to make a chart of all the past teams to be #1 in offensive efficiency dating all the way back to 2002 along with their results and those particular teams defensive ranking.  Right now, Dayton is #58 in defensive efficiency, but have gotten as high as #38.  Here’s the chart below: 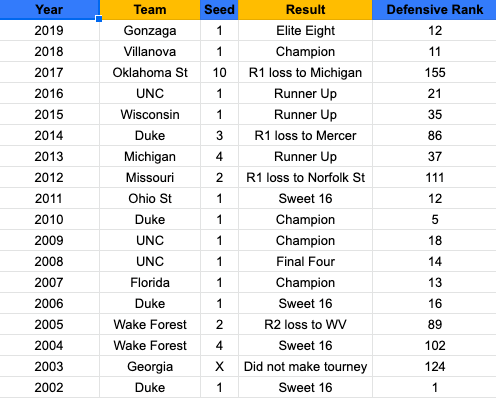 Let’s start with the fun one that every one wants to dream about, national champion.  So far, there have been 4 national champions with the #1 offensive ranking.  Each one of those teams were also top 20 in defensive efficiency.  Each of those four teams were also #1 seeds in the tournament.  If you are really good on offense and defense, you have a good chance to make it far in the tournament.

Now let’s look at national runner ups.  There have been three teams to finish by losing in the national title game.  First, the 2016 North Carolina team that fell victim to the buzzer beating three by Villanova.  Next, the 2015 Wisconsin team that ended Kentucky’s undefeated season but lost to Duke in the final.  The third team is the 2013 Michigan team that lost to Louisville in the final.  Defensively, UNC was #21, Wisconsin was #35, and Michigan was #37.  Michigan was the only non-one seed, as they were a #4 seed.

Onto the second weekend exits.  The only team to lose in the Elite Eight was last season’s Gonzaga team that lost to Texas Tech, who eventually lost in the title game to Virginia.  Gonzaga was 12th defensively last season.  Next is the Sweet 16 exits, which are very strange when you look at the numbers.  There have been 4 Sweet 16 losses since 2002.  The 2011 Ohio State team was a #1 seed with a #12 defensive ranking that lost by 2 points to Kentucky that was #8 offensively and 16 defensively.  Next was 2006 Duke team with a #16 defensive ranking.  They were also a #1 seed and lost to LSU, who was #62 on offensive but #3 on defense.  The 2004 Wake Forest team was a #4 seed and lost to #1 seed St. Joseph’s.  Wake Forest was also #112 on defense that year, but they only lost to the Hawks by 4 in a high scoring game.  Finally, the most puzzling one of all is the 2002 Duke team that was #1 in both offense and defense, but lost to #5 seed Indiana by 1.  That season, Indiana was #26 in offense and #5 in defense.  Based on these results, these teams ran into some really good defensive teams that were able to shut their offenses down.

Finally, we have the early exits and upsets.  The only team to lose in the round of 32 was the 2005 Wake Forest team, who was a #2 seed and lost to #7 seed West Virginia by a final score of 111-105.  Wake Forest was #89 on defense while West Virginia was #88.  Go figure.  Next are the first round exits and upsets.  The 2017 Oklahoma State team was a #10 seed who lost to #7 seed Michigan by 1.  The Cowboys were a dreadful #155 on defense which does not help against another top 5 offense.  Everyone should remember the infamous 2014 Duke loss to #14 seed Mercer.  As crazy as that upset was, Duke was #86 on defense against the #75 offense in Mercer.  Nothing to brag about, but it was a top 100 offense Mercer squad.  Next is the 2012 Missouri loss to #15 Norfolk State.  Mizzou was #115 on defense that season, and they lost to Norfolk State who was #211 on offense.  Basically, those two huge upsets shouldn’t have happened, but if you play bad defense, teams can sneak up on you.  The only team to not make the tournament is the 2003 Georgia team that was #124 of defense, the second to worst ranked defense of this group behind Oklahoma State.

So how far can Dayton realistically go?  As I stated earlier, they are #58 in defense right now and have been as high as #38.  This means they are on a bad stretch defensively right now.  Believe the hype; Dayton can actually go all the way, but statistically right now, I would definitely say they are are a for sure second weekend team.  None of these teams that I listed that are above the top 60 in defense has ever lost before the Sweet 16, which bodes well for the Flyers.  After that, it gets murky.  No #1 efficient offensive team with a defense below #40 has made it to the Final Four.  The only teams with defensive rankings in the 30s are Wisconsin and Michigan, who were both national runner ups.  All four of these teams I listed that won the national title had a top 20 defensive efficiency rating.

With that, Dayton is a pretty good bet to make it to the second weekend with where their defense is currently and having that #1 offensive efficiency ranking.  One thing to note is both of their losses this season came to teams that are top 50 on offense and top 20 on defense.  Dayton could have trouble with teams that are balanced but lean more on the defensive side.  Any of the Flyer fans can tell you right now that they are capable of playing better on defense but they get lazy when they go up by a lot on the scoreboard and let teams get back in the game.  This is true, but laziness on defense cannot be the new norm when Dayton is up by a lot.  It can start to become a habit, which is not good when you are beginning the stretch of gearing up toward March.  The NCAA tournament is always a game of match-ups, but Dayton needs to improve their defense if they want to think about the Final Four.