The Portsmouth Invitational Tournament, an annual showcase tournament for 64 college seniors from all over the country, took place this past week and featured teams with four former A10 players.  Davidson’s Tyler Kalinoski, UMass’ Cady Lalanne, St. Bonaventure’s Youssou Ndoye, and VCU’s Treveon Graham all displayed their talents for NBA and European scouts, agents, managers, and various talent evaluators.  A10talk was all over the P.I.T. and we will have some video and interviews with the guys posted shortly.  Here is a quick overview of what we saw. 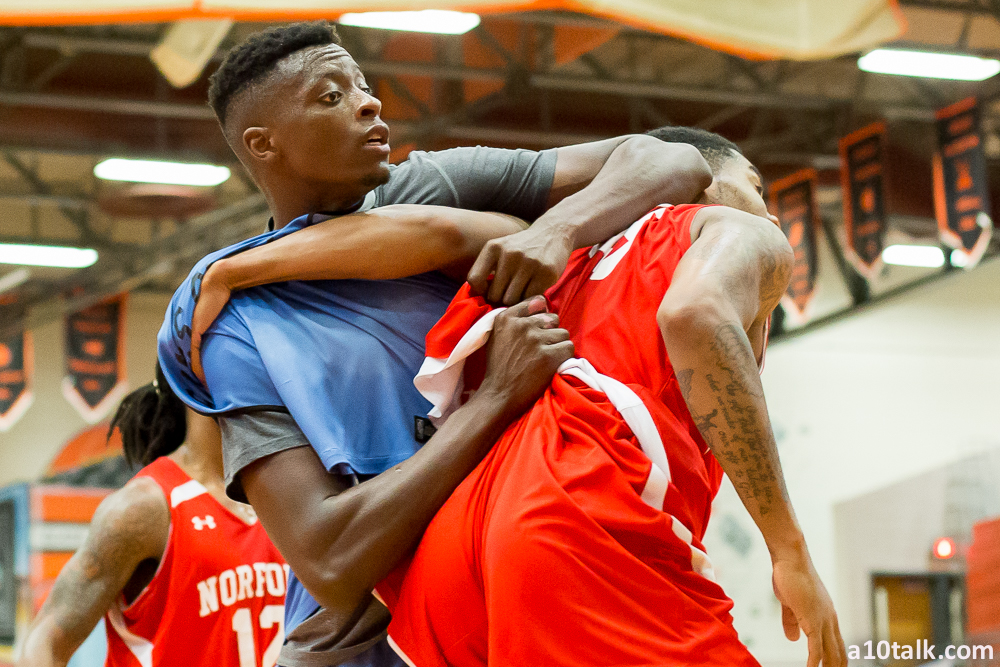 Cady made the All-Tournament Team after having posted a double-double in each of his games.  He showed great hustle throughout the tournament, often beating everyone down the floor off of rebounds to get into good post position.  Cady did a nice job showcasing his jumper off of pick-and-rolls along the baseline.  One scout commented to me that his 15-foot jumper looked as smooth as any big he had seen in the past few weeks.  Lalanne struggled at times setting solid picks and then being able to roll to the rim quickly and he missed a few passes by not having his hands ready to recieve the ball but his positives far outweighed his negatives this week.  He was engaged in the game and showed to be a great teammate as well.  Cady definitely held his own in the paint (which is saying something considering the amount of contact that was not getting called) and had a couple of thunderous dunks off of missed shots, showing his ability to get off of the floor quickly and a nose for the ball.  Lalanne out-worked his opponents on multiple occasions for position in the post and rewarded his team by finishing at the basket on a pretty consistent basis. 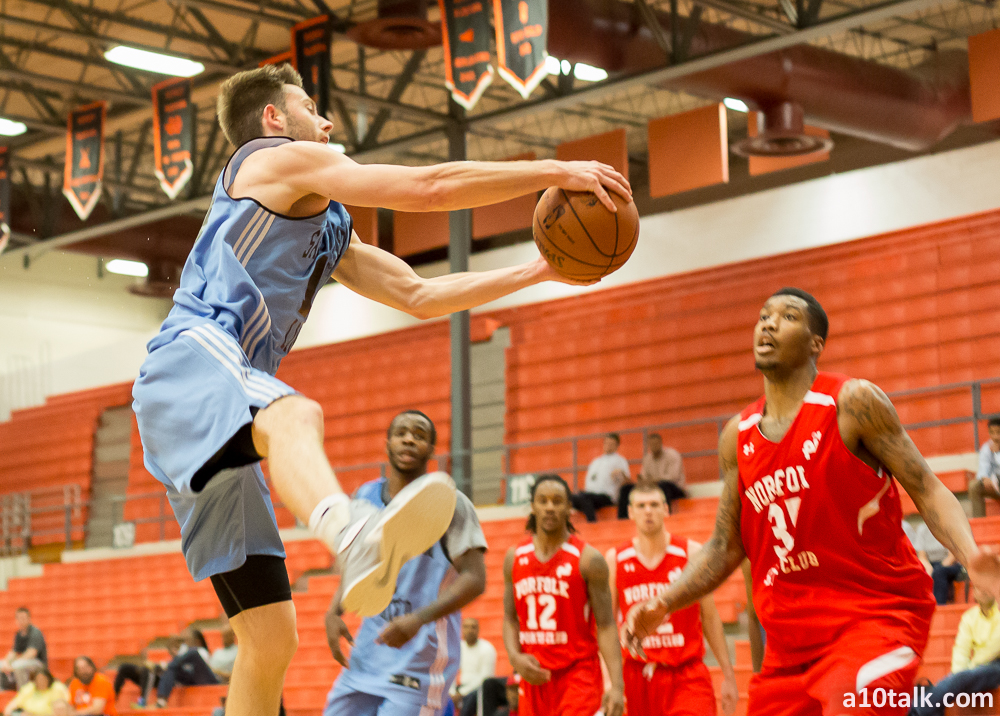 This year’s A10 Player of the Year showed up to Portsmouth ready as always to make shots.  He showcased his range in his first two games, going a combined 8-12 from behind the arc.  A showcase like the PIT is never going to really allow a player like Kalinoski to show just how valuable he can be to a team because of the lack of passing and moving without the basketball that takes place.  There were numerous times in the first game where Tyler would set-up his man for back-screens but his teammates weren’t looking for him.  However, by the second game his guys must have gotten the memo because Kalinoski did a beautiful job moving without the ball and got open lay-ups off of backdoor cuts.  There were multiple occasions where Kalinoski struggled guarding quicker guards in space and that is an area of his game where he will need to improve.  But teams really aren’t looking for Kalinoski to be a lockdown defender.  A scout from an Italian team told me that he could see Tyler making a lot of money in Italy over the next few years.  He loved his shooting (obviously) and his basketball IQ.  I was impressed with Tyler’s ability to mix it up with bigger guys and not shy away from contact.  He is tough kid and did well for himself this week at the PIT. 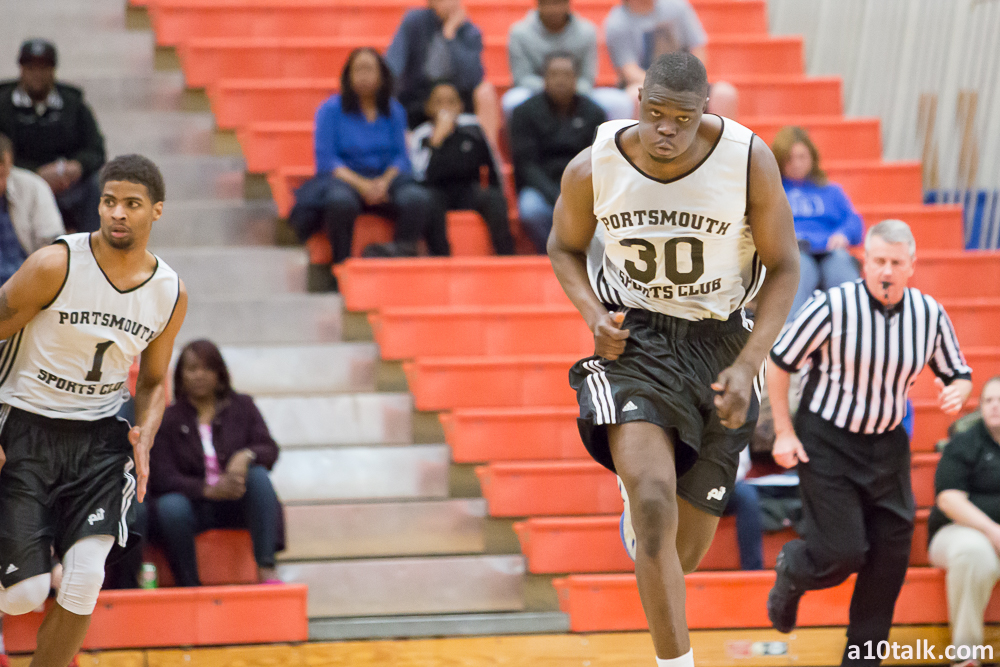 The big man from Bona saved his best for last on Saturday, notching a double-double and showing why he can be a force in the middle.  Ndoye definitely looked rusty in Game 1 and he later told me that hadn’t played hardly any 5-on-5 since the season ended.  He did a nice job of knocking off the rust in the second half of that game, getting great position in the post on multiple occasions and going to his power dribble and jump hook for a very strong finish in traffic.  Youssou ran the floor exceptionally well for a guy his size as there were multiple occasions where he beat smaller, quicker defenders down the court for an easy dunk or finish.  Ndoye had trouble at times in the paint when bigs were being physical with him and didn’t finish at the rim on a couple of occasions as a result.  He did show good court awareness on the defensive end and with his great length, changed numerous shots which led to misses and rebounds for his teammates.  The motor was there for Ndoye all tournament as he played as hard as he possibly could and everyone in the gym took note.  He is an incredibly polite and sincere young man who will do very well in interviews and that is a bigger asset than most people realize.  Youssou is an easy guy to root for and I know he picked up some more fans this week. 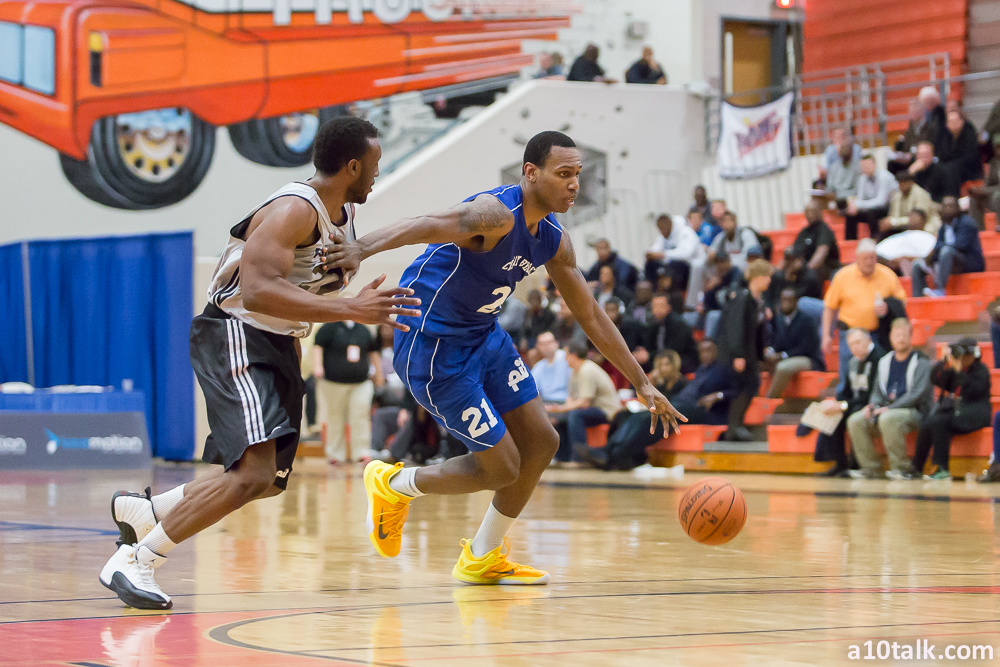 Your 2015 P.I.T. MVP, Treveon Graham, was the best player on the best team at this year’s tournament.  Graham did whatever he had to in order to help his team win.  He scored the ball from outside and inside, he played tough  defense on the perimeter and in the paint (showcasing his great leadership skills in the process), and he was a great teammate who made the guys around him better.  One of the coaches on his team told me how in 20 years of being involved with the P.I.T., he’d never seen a team like with such great communication and chemistry.  He told me on Wednesday night that they would win the tournament and that Graham was going to be the MVP.  I later asked him for the winning LOTTO numbers but he declined comment.  But seriously, Tre Graham was a stud this week in Portsmouth.  Evaluators love his strength, toughness, basketball IQ, shooting from the perimeter, rebounding, and his general ability to make plays.  A couple of scouts mentioned to me that Graham’s lateral quickness will be an area where he needs to improve and Tre said the same thing to me when we sat down and talked on Friday night.  Treveon was able to get out in transition and actually got a nice dunk off off a JJ Avila pass in transition that got the fans excited.  I’m assuming Tre was equally as excited as it had been quite a while since he threw down like that after having battle a high ankle sprain since January.  Graham is definitely a “tweener” for the NBA but he will make a living somewhere playing ball very soon.  A scout told me that the idea of a 3 trying to guard Graham in Europe was absolutely a joke.  A humble and polite young man, Treveon exemplifies what hard work and dedication can get you if you are willing to make the necessary sacrifices.  Graham turned a lot of heads this week and may have even given himself the chance to hear his name called in the second round of the NBA draft in a few months.