One of the best things about the offseason is a lack of real college hoops stories often creates some fun and interesting debates. Sports Illustrated lobbed one of those up today when it asked who the greatest Cinderella team of all-time was, their list including five teams currently in the Atlantic 10. 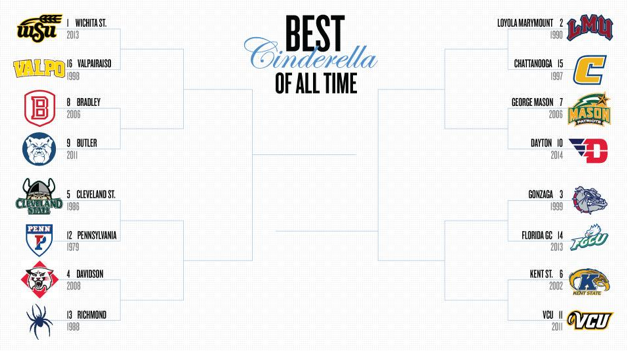 While we’re at it, let’s take a quick look at the Atlantic 10’s squads.

This was the year the world was truly introduced to last year’s reigning NBA MVP, Steph Curry. The 2008 Wildcats showed signs of being dangerous early that season, coming up just short to the likes of North Carolina and Duke before the 10th-seeded Wildcats took out Gonzaga, Georgetown and Wisconsin before losing by just two points to the eventual champion, the Kansas Jayhawks.

Why they could be argued as the best Cinderella – Because they were crazy good and depending on how you define “best” Cinderella”, are clearly one of the best teams, if not the best, of this group (easily the best player resides on this team).

Why not – The Wildcats were a Cinderella that year largely because of their conference affiliation, not the level of talent they displayed all season. The Cats had the nation’s fifth most efficient offense and 21st most efficient D, meaning the only real Cinderella thing about this Cats squad was the SoCon patch on their jersey.

The 13th-seeded Richmond Spiders busted brackets during the 1988 tourney by opening their run with an upset win over defending champs Indiana. Led by legendary Spiders coach Dick Tarrant, UofR entered the tournament after winning the 1988 CAA Championship and ground their first two NCAA opponents down with a stifling defense and just enough offense from the duo of Rodney Rice and Peter Woolfolk to send Richmond fans on a thrilling three-game tourney run that ended at the hands of top-seeded Temple.

Why they could be argued as the best Cinderella – Only three 13 seeds have won a round of 32 game against a single-digit seed and only two of those were from non-power conferences at the time: Richmond and Bradley. These wins were serious upsets and what people would consider a real Cinderella win and not just a couple of victories by an under-seeded team.

Why not – A Sweet 16 run is two less wins (and in one case three) than other teams on this list, and the Spiders  eventually bowed out of the tourney with a 22-point loss.

The ’06 Patriots were eliminated by the mighty Pride of Hofstra from the 2006 Colonial Athletic Association tournament and many in the media assumed that was the end of George Mason. A visually upset duo of Billy Packer and Jim Nantz blasted the selection committee when the Patriots were announced as the 11-seed in the DC original, a seed line that would result in one of the most unlikely home court NCAA tournament advantages in tourney history as the Patriots would go on to defeat a very loaded top-seeded UConn team just 30 minutes from campus.

Why they could be argued as the best Cinderella – No one outside of the CAA saw this run coming as the ’06 Pats gathered all of the best wins within the conference. They are one of just three 11-seeds to make it to the NCAA Final 4, the three lowest seeded teams to make it that far and just one of two teams to do so outside of the power conferences and were the first team outside of the BCS to make this deep of a run. What’s more, they didn’t just cruise to the grandest stage by lucking into some cupcake match ups, they did so with wins over the likes of Michigan State, North Carolina and UConn. And let’s be real, when UConn extended that Elite 8 game into overtime…how many of you thought that was the end of George Mason’s run?

Why not – That’s a damn good question. If our definition of “best Cinderella” is best story, they have to be probably in your top two, top three at worst. If we’re saying which of these teams would win a tournament of Cinderellas, I don’t know, maybe they aren’t your winner. I personally lean storyline when we are talking Cinderellas and George Masons 2006 run is just about as good as it gets.

The season ain’t over until it’s over. The 2013-14 Dayton Flyers started Atlantic 10 play with a Fordham-like 1-5 record before catching enough fire to earn an at-large bid and an opening-round matchup against instate rival Ohio State. That win probably would’ve felt good enough but Archie Miller’s squad decided to win a few more en route to the Flyers first Elite 8 appearance since 1984.

Why they could be argued as the best Cinderella – The Flyers have to get some bonus style points for their run, first defeating Ohio State at the buzzer then getting another big bucket from guard Vee Sanford the following game to out-last Syracuse in one of those games that takes at least five years off a fan’s life. They also made it a step further than all those Sweet 16 teams on the list.

Why not – Dayton might not be Duke but they are still a program with a ton of history and a fan base that easily draws 12,000 on any given night against any random team. The A-10 sent six teams this season so outside of conference name recognition everything about this team this season basically read power conference.

Another team that saw massive outrage upon their selection, the 2011 Rams used the media blasting from ESPN’s Jay Bilas and Dick Vitale as motivation during the 2011 Final 4 run that included a win in the tournament’s first ever First 4, meaning VCU became the only team to win five NCAA tournament games and not play in a national championship.

Why they could be argued as the best Cinderella – VCU had had a winning tradition but had never even advanced to the Sweet 16 up to this point. Not only did the unlikely 2011 at-large bid make it to the Final 4, they did so by blasting the Pac-12’s USC by 13 in the First 4, demolishing 6-seeded Georgetown (of the old Big East) by 18 in the round of 32, crushing 3rd-seed Purdue by 18 to advance to the Sweet 16 and had a thrilling OT win over Florida State to advance to the Elite 8 where they would take down No.1 Kansas by double-digits after leading by as many as 17 at one point for an average margin of victory of 12 points on their way to the Final 4. In short, these dudes played absolutely out of their minds.

Why not – Real tough to say but the best argument I can think of is they entered the tournament with an at-large bid instead of as a school school that got hot in their conference tourney. That said, VCU lost four of their last five CAA games that season, three of which were at home and two of those coming by double digits. Were they the best team among this group? Probably not. Were they the best story? It’s tough to argue otherwise.