It’s been a chalk-filled Atlantic 10 tournament thus far with all the favorites from yesterday’s action advancing to today’s semifinal matchups. That means just one seed outside of the top-4 won, as the VCU Rams were the kenpom and Vegas picks to “upset” 4th-seeded Richmond Friday afternoon.

A quick look at yesterday’s action:

Yesterday’s opener sparked what proved to be an amazing day of A-10 action as 9th-seeded La Salle threatened to send the regular season champ back to Davidson after just their first day of Atlantic 10 tourney action. The Explorers used a serious advantage in the paint combined with a hot stroke from senior DJ Peterson to go up 18 points on the Wildcats early but allowed Davidson to grab momentum behind back-to-back Brian Sullivan three-pointers in the final minute of the first to trim the Explorers lead to a more manageable 10 points. The Explorers were able to keep the Cats at that distance for the most part over the second half until A-10 Coach of the Year, Bob McKillop, dropped his Wildcats into a 1-3-1 zone that completely shut down La Salle over the final 4:40. From that point on the Wildcats outscored La Salle 9-0 including a game-winning layup from A-10 Player of the Year Tyler Kalinoski that gave the Wildcats the dramatic comeback win at the buzzer.

It’s quite difficult to beat a good team three times and Richmond found that out the hard way yesterday. Despite sweeping the Rams in their two regular season contests, the Spiders came up on the wrong side of an A-10 slugfest that was as exhausting as it was fun. The teams traded leads throughout the first half before the Rams headed into the locker room up by a point. Richmond quickly grabbed that lead out of the break and held it tight, going up by as many as eight points until VCU reclaimed it late with a corner three from sophomore Doug Brooks to give the black and gold a 62-60 advantage with 1:38 to play. TJ Cline tied the game on the Spiders next possession, but a Mo Alie-Cox and-1 nine seconds later gave VCU the lead for good as a combination of free throws and a Kendall Anthony travel would ultimately do Richmond in. The Spiders shot an outstanding 57% from the field in the loss but allowed 10 VCU three-pointers, five from junior Melvin Johnson, to give the Rams the win. VCU outscored Richmond 16-0 from the free throw stripe. The Spiders were 0-5 at the line.

Yet another incredible A-10 tournament game, St. Bonaventure battled the Flyers despite losing big in their two previous contests. The Bonnies took a two-point lead into the half and led 67-64 with 2:11 to play after two big Marcus Posley free throws. From there Dayton made the key plays needed to survive and advance, getting two free throws from Scoochie Smith followed by a timely three from Jordan Sibert with 1:11 to play to give the Flyers a two-point lead. An errant Bonnies pass on the ensuing possession turned into a Sibert layup gave the Flyers a four-point lead and the slightest bit of comfort, albeit for just 12 seconds of play. Marcus Posley quickly cut the lead to two on a layup, then hit another after Sibert hit just one of two free throws. The Bonnies fouled again and got another 1-2 performance from Sibert. With a chance to tie or win it, the Bonnies turned it over on their final play and Dayton’s Kyle Davis drove the nail in the coffin on a fastbreak layup to give the Flyers the win and a ticket to the semis.

Rhode Island turned a two-point halftime deficit into a relatively easy win after dominating the Colonials over the final 11:04, outscoring GW 32-15 in the final quarter of play of yesterday’s nightcap. The hot shooting GW team from the second round turned into the ice-cold version of the Colonials as GW hit just one of their 16 three-point attempts. The Colonials had 16 more attempts from the field than Rhody but were outscored by 10 at the free throw stripe in yesterday’s hack-fest (49 total fouls). EC Matthew took advantage of those calls, getting 10 of his game-high 21 points at the stripe. He was joined in the double-digit club by guards Jarvis Garrett and TJ Buchanon with 12 points each. Patricio Garino finished with a 17-point, 10-rebound double-double but was surrounded by a cold group of Colonials that didn’t have enough offense to get past the stingy Rhode Island defense. 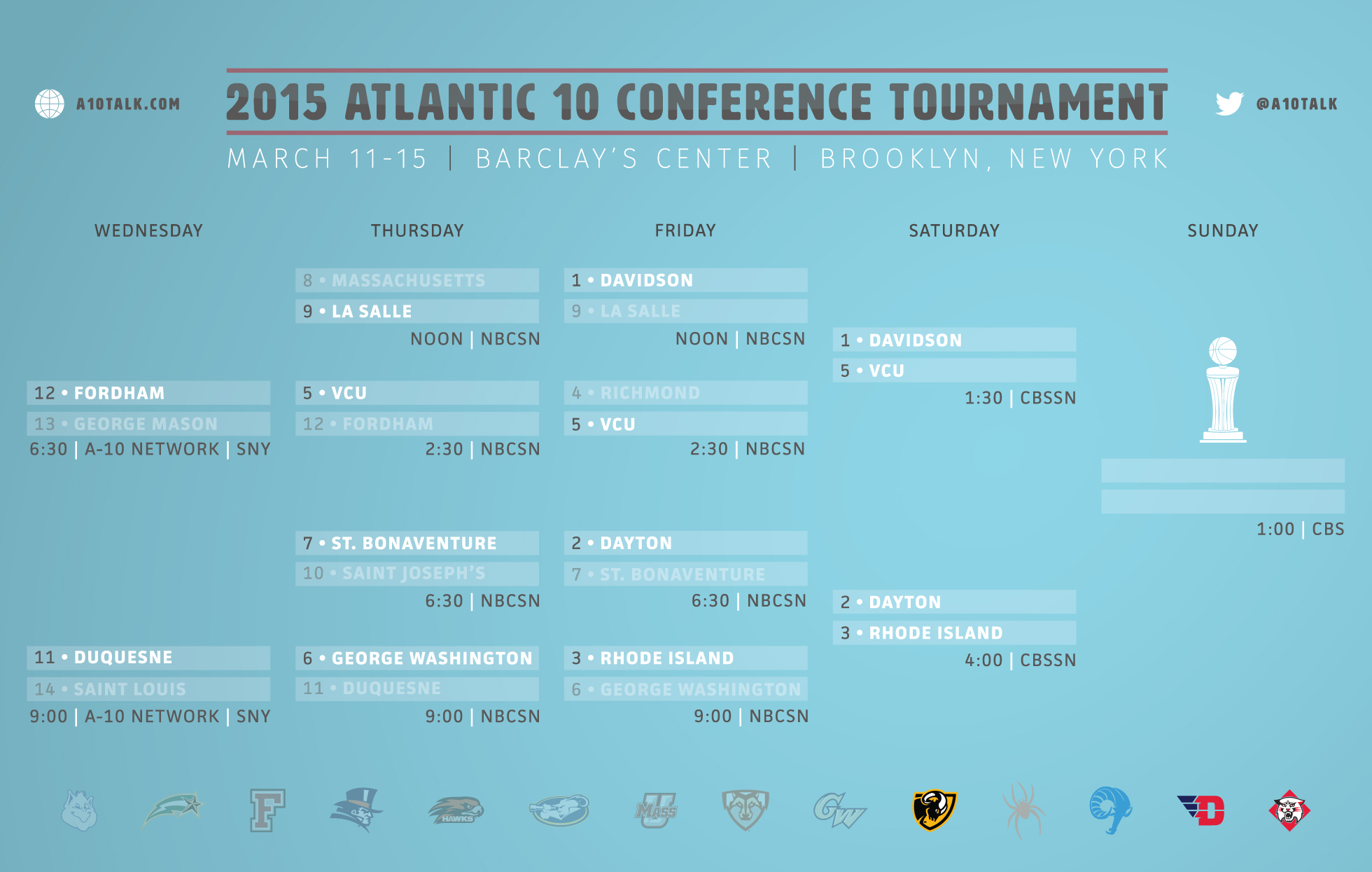