Saint Joseph’s (6-10, 0-4) ran into a buzzsaw on Wednesday night when the Duquesne Dukes (13-5, 3-2) came to West Philly and shot the lights out before leaving Hagan Arena with a 92-80 win over the Hawks. At one point late in the first half, Duquesne was shooting 9-11 from 3 point range. They finished the game shooting 14-25 from three (56%) despite shooting 33% from deep in the second half.

It could not have been a worse start for the Hawks, as Kacper Klaczek picked up a foul two and a half minutes into the game and picked up a technical foul after slamming the ball in frustration. Just like that, the Hawks were without their best defender for the rest of the first half due to the two early personal fouls.

Duquesne has been one of the best offenses in the A-10 this year as they rank 64th in the country in adjusted offense and 46th in the country in 3-point FG percentage (37%). With that, you would have to assume Saint Joe’s would have been somewhat prepared for what this game turned into. Unfortunately, they had no answer for the Dukes’ shooting. Duquesne shot 67% in the first half from the field and 77% from 3. The Hawks didn’t have much of an answer for anybody in navy blue tonight, but R.J. Gunn was unconscious in the first half and finished with 26 points on 8-10 shooting.

For Saint Joseph’s, it was a lot of the same story every time down the floor on the defensive end. Billy Lange implemented the full court trap earlier this year and saw some success with it especially against Villanova. Duquesne had zero issues with the trap, and it led to Saint Joe’s defenders being late on rotations in the corner. In the first half alone, there were at least seven instances of WIDE-open threes right in front of the Hawks bench. In at least three of those instances, Lynn Greer III was the culprit in not getting out on the shooter in time. Wednesday night was the tenth time Saint Joseph’s gave up 90 or more points to an opponent under Billy Lange.

If you told me SJU would put up 80 points, shoot 45% from the field and 36% from three, I would have felt pretty good that they picked up their first conference win. Cameron Brown returned to form tonight after only scoring 8 points in the tough loss last Saturday at Fordham. Brown had 25 points and was 8-14 hitting 6 of his 11 attempts from three. Another small bright spot for the Hawks offense came from Ejike Obinna. Obinna played 23 minutes on Wednesday night adding 14 points and 6 rebounds. Arguably Saint Joseph’s best player, Erik Reynolds II, struggled yet again tonight after going 3-13 from the field and 1-7 from three. Since a solid game to open A-10 play against St. Louis, Reynolds is 13-41 from the field (32%) and 6-23 from three (26%). I am not placing all the blame on Reynolds, as there needs to be a concerted effort from the coaching staff to get him easier shots. 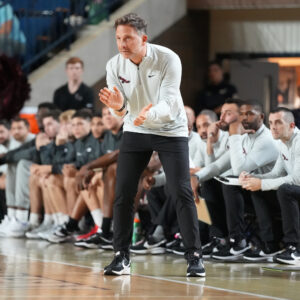 Although Cam Brown and Erik Reynolds II have been struggling a bit to open up conference play, I am not worried about them moving forward. Kacper Klaczek has been Saint Joseph’s best defender and has shown success when he attacks the rim. Rasheer Fleming shows signs of CJ Aiken circa 2012. Obinna has been much better in conference play after seeing a huge minutes reduction compared to last year. When Lynn Greer III started the season, I loved what I saw. It was vital for SJU to get another playmaker after a guy like Jordan Hall went to the NBA. Reynolds is small enough to be a point guard, but he’s not a playmaker. He’s an undersized 2 that likely needs to play off the ball. Greer had moments this year, even with his poor shooting ability. Greer finished the game against Villanova with 14 points on 4-16 shooting, 5 rebounds, 6 assists and only ONE turnover. After a few cupcake games, SJU opened up conference play against Saint Louis where they fought super hard in a five-point loss. In that game, Greer shot poorly (4-14) but managed to finish with 11 points, 6 rebounds, 9 assists with only 2 turnovers. Seems like a solid point guard who struggles offensively but is exactly the distributor this team needs. Billy Lange decided to bring him off the bench against a Dayton team that he transferred from. This seemed to have killed his confidence as he has been atrocious with turning the ball over and has been hesitant to shoot the ball in the paint. I questioned Lange’s decision with that one. It’s not like Greer provides a scoring option off the bench. Saint Joe’s had 3 assists in that first half against the Flyers before they ran away with the game in the second half.

After SJU started off conference play against two of the toughest teams in the A-10, fans had a bit of hope as the Hawks’ conference schedule is one of the easier draws we will see. They avoid playing a home-away against the juggernauts of a weak A-10. The Hawks host another struggling A-10 team this Saturday when Loyola Chicago travels to West Philly in a matchup of two schools looking for their first conference win of the 2022-2023 season. Loyola is notorious at turning the ball over, but the Hawks are not a team that forces a lot of turnovers on the defensive end. It will be interesting to see if the coaching staff adjusts on these blown defensive assignments, but one thing is for sure, Saint Joe’s is desperate for a win on Saturday. If they don’t get one, things may get very interesting a lot sooner than Saint Joseph’s fans thought.