You’ll be hard-pressed to find a college basketball fan who’ll tell you March isn’t the best month of the season. I don’t disagree; seasons are made, and most importantly, completed, in March. But when you’re like me and you cover an entire conference and root on 14 teams night-in and night-out, it feels like the season is made in November. Just 2 or 3 weeks into the season, it’s easy for teams to play their way in or out of the NCAA Tournament at-large conversation. There are only so many opportunities for the conference as a whole to move the needle, and they are all right now. Once conference play begins, the focus switches from across conferences to within conferences. There’s no more picking up big wins for the league when the league is facing itself. There’s no more “awesome night for the Atlantic 10,” or “damn, I wish the conference had that one back” once the New Year rolls around. In a sense, this makes November and December my two favorite months to watch hoops. It’s a chance for a league that I love to get national attention as a whole, and we all hope that recognition leads to postseason play for multiple teams.

Sure, the eye test tells me that George Mason may not be a great team after it took Navy to overtime and let Long Island hang around to the final minutes. Sure, I wasn’t thrilled to see Richmond have to drawn on an incredible comeback to beat St. Francis PA in its opener. But watching A-10 hoops on Wednesday night was the first time in awhile the structure of the conference didn’t feel incredibly fragile. I look back at Saint Louis’ first 3 games of 2018-19 as the quintessential feeling of fragility. It took the A-10 favorites quite the effort to get past the likes of South Alabama and Troy in the early going. This season’s SLU team (which was expected to take a step back after losing 2 prominent offensive weapons) has shown signs of being the best offensive SLU team Travis Ford has had yet, but I caution you, it is early.

Further, VCU’s first half of basketball against LSU threw caution to the wind. The Rams hit everything and played stellar defense; even though LSU mounted a comeback and almost took VCU down in the final minutes, it wasn’t particularly nerve wracking. It kind of felt like Wednesday night was our night, and the Atlantic 10 was going to take care of it. Saint Joseph’s did the same; once the Hawks went up 25 or so in the first half against Connecticut, I knew the Huskies would comeback, and they did, but I had this reassuring feeling that the league would win that game once the Hawks got up big. And that they did.

But don’t take my anecdotes as proof that the league is off to a much better start than last year. I went ahead and did the liberty of tracking A-10 Kenpom.com rankings for the first few games of the season. I reference Kenpom a ton on this site, and he does a great job, so I’d suggest subscribing for $20 a year if you’re a hoops junkie. Anyways, Kenpom’s rankings are mere algorithmic guesses in the preseason, as the computer doesn’t really know what to do with newcomers and puts a lot of weight on returning players. You can’t really trust the number next to a team in Kenpom until there is sufficient season data, and I think that tends to happen around the new year. However, the ordinal nature of Kenpom’s rankings let us track team movements throughout the season, and I think this is more interesting than where any individual team ranks at a given moment. See the graph below for movements through the first 9 days. 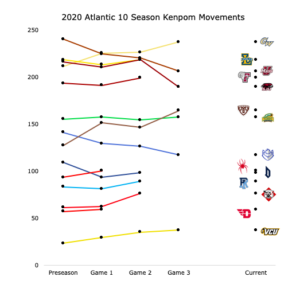 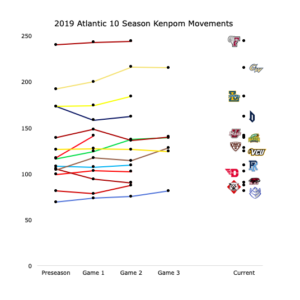 Keep in mind here, lower rankings are better (i.e. closer to 1), so any trends moving down the graph are favorable for the league. This time last season (graph on the right) we see most teams steadily moving up the rankings are remaining mostly flat through their first few games. Saint Joseph’s gets a nice boost after some big opening performances in 2018-19, but that’s about it. Through the first 3 or so games this year, however, we see a lot more volatility and more teams outplaying their preseason ranking in a positive way. For example, we see SJU take a stark step in the right direction after beating Connecticut. Saint Louis has been making steady jumps down the list, and Massachusetts has improved in every game it has played this season. Obviously it’s not one big rose garden: St. Bonaventure and Davidson are showing trends in the wrong way.

The 2020 Kenpom graph shows that we’re starting to see tiers emerge in the Atlantic 10, though it’s obviously too early to take any of this that seriously. However, Saint Louis and Duquesne are showing they belong in the conversation with VCU, Rhode Island, Davidson, Dayton, and Richmond (note, this graph was made before Richmond’s game against Vanderbilt). Further, we see St. Bonaventure and George Mason somewhat alone in a second tier where Saint Joseph’s and Massachusetts are gaining on them quickly. Compare this to an Atlantic 10 in 2018-19 where we have 8 or 9 teams clustered around the 100 mark in Kenpom with no clear favorites to emerge from the pack and the likelihood of a cannibalizing league that doesn’t produce multiple bids. If Marcus Evans didn’t get hurt in the A-10 Championship, that might have happened.

This is no attempt to predict the league and shouldn’t be a heavy topic for debate. The reality is, these rankings represent little to no data yet, and we’re merely interested in the subtle movements that are indicative of impressive or disappointing play. My main takeaway is that the Atlantic 10 is on track to be a better league, and it feels like there will be a much bigger gap between the top and bottom teams this year; however, with Saint Joseph’s and Massachusetts playing really good basketball, we could see them shoot up to the upper-middle of the pack.