The past 2 seasons in the Atlantic 10 have built up to 2019-20. The league as a whole went through a big transitional phase when Will Wade and Archie Miller left VCU and Dayton respectively. The very next year, Dan Hurley jumped ship to Connecticut as Rhode Island bulldozed its way through the league. 2018-19 was rough for most A-10 teams. VCU caught fire despite being picked to finish in the middle-of-the-pack, and if it weren’t for a Rhode Island upset in the A-10 Tournament, we could’ve had a 1 bid league. But 2019-20 is supposed to be different, and damnit, it has been so far.

I’ve written a lot about how important November is to the Atlantic 10 conference. November is the only reason national college basketball pundits take us seriously. It’s the only reason the Selection Committee gives the league a look at the end of the season. Seasons are decided for teams in March, but seasons are decided for mid-major conferences in November.

That’s why this year has been so exciting for someone like me that genuinely loves this entire basketball conference. I started rooting on the Atlantic 10 as a Davidson fan, and my allegiance still lies with the Wildcats, but I’ve developed an affinity for all 14 teams in this conference. This season could be a giant step in the right direction for the Atlantic 10. 2014 was a year that 6 A-10 schools went to the NCAA Tournament. I can almost guarantee that won’t happen this year, but 2 seems very reasonable, 3 could happen, and 4 doesn’t seem too far outside the realm of possibility.

The Atlantic 10 continues to move the needle, beating Power 5 teams while the opportunities remain. We still have a lot of basketball to play before January, but the conference keeps making strides.

In terms of Kenpom top 100 wins, the Atlantic 10 currently has 7, and a lot of opportunities remain. LSU and Wisconsin have been the 2 biggest victories thus far, but wins over Georgia, Belmont, and Alabama could all carry merit come March. Here’s a quick breakdown of some of these big wins and how they’re effecting each team’s individual outlook:

The Tigers don’t appear to be a fluke this season; they’ve been battle-tested in their first few games, and if it wasn’t for a late lead blown against Utah St., they would’ve had a top 15 win on their resume. VCU is going to cherish this win in March. If LSU finishes top 5 in what should be a pretty competitive SEC, that’s going to help the Rams’ NCAA Tournament seeding a lot. I think the best part of this game was VCU’s ability to finish without Marcus Evans (he fouled out with about a minute to go), and the Rams relied on their defense to create offense in the final seconds to seal the deal. VCU hasn’t gone away from its identity, and you can see players making improvements this year compared to last. Almost everyone is shooting the basketball better, and the Rams have recently made some strides taking care of the basketball. Purdue and Florida St. / Tennessee will be 2 more great opportunities for VCU.

This one’s real fresh in our minds, and it was very promising for someone like me who’s watched Richmond struggle mightily on the defensive end this season and the last few years as well. Chris Mooney’s guys played on another level and held the Badgers to 34.0% shooting from the field and forced a disciplined team to commit 13 turnovers. Also, this game proved that UR is deep enough to win big basketball games when Jacob Gilyard is struggling. Richmond’s best player had 5 points on 1/5 shooting, but Blake Francis and Grant Golden picked up the slack. Heck, even Souleymane Koureissi provided some solid minutes off the bench, especially on defense.

This one too is recent, and I think the best part about it was not just Obi Toppin being an absolute menace but also how good of a defender Rodney Chatman is becoming. The transfer from Chattanooga put the defensive clamps down on Anthony Edwards, one of the best freshmen in the nation, and held him to just 2/10 shooting from the floor. Like Richmond, Dayton proved it can be just as effective against a Power 5 school even when Obi Toppin isn’t on the floor. Toppin helped the Flyers jump out to an early double digit lead that they wouldn’t surrender, but even when he wasn’t on the floor, the team generated enough offense to keep — and even build upon — a 15 point lead throughout the 2nd half.

This one’s kind of a bonus, as the Hawks struggled this weekend in the Charleston Classic and most certainly have some work to do before they’re good again. That being said, it was fun to see SJU get red hot from deep and embarrass Dan Hurley and the Huskies in their home arena. I think this team will be very good under Billy Lange, and if anything, this win was a glimpse into the future. When this team develops, gets deeper, and gets more experienced, Lange and co. have a shot to do something special. 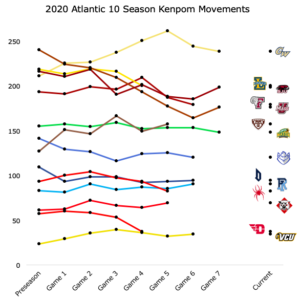 I did this in a previous article, and I thought it would be fun to continue throughout the year. See in the graph to the left a visual mapping of Kenpom.com rankings for A-10 teams. A lower score is better (i.e. a ranking of #1), so movements down represent movements in the right direction. A few points to note about Kenpom’s rankings. They still reflect a good deal of preseason predictions; thus, we still see a team like Davidson ranked 3rd in the conference. Pay more attention to the trends for individual teams. Again, movements down are good.

The league seems to be improving a good deal across the board. We can see Massachusetts and even Fordham have made strong movements since the start of the season. Dayton’s big win over Georgia gave it a boost closer to VCU’s ranking. We also see distinct tiers starting to develop. Right now, VCU and Dayton are alone in their one world followed by a grouping of Davidson, Richmond, Rhode Island, and Duquesne, and Saint Louis is trying to knock on that door. It wouldn’t be surprising to see those 7 teams finish somewhere in the top 7 in some order (note: Davidson has looked really bad, but the Wildcats always blow it in non-conference and get a ton better, so I’m not sure it’s justified to think they’ll finish 8th or 9th, but time will tell).

I’d like to see George Mason emerge from that bottom pack a bit and improve throughout the remainder of its non-conference schedule. Even though the Patriots are 6-1, they haven’t gotten a lot of movement because they haven’t beaten bad teams by considerable margins. Again, this is something that weighs heavily in Kenpom rankings. I’ll continue to update this graph throughout the season (and try to get a better photo quality… right now a screen shot of an excel graph is the best way to do this). I think the main takeaway is obviously that the conference is headed in the right direction, and better basketball now means more attention from the rest of the country once league play starts. I think we’re in for one heck of a college basketball season in the Atlantic 10.