I'm not sure what to expect other than an ugly Winn. Let's hope our bigs look somewhat serviceable.
C

I'm not usually a fan of comparing years, but roster DNA similarities to 2018/2019 are there. I'm reminded of the opener, too.

Stockard was out, Kaputo was hobbled. We controlled throughout, and fell apart the last 5 minutes. Not coincidentally, the wheels came off after Griffin went down. We couldnt close it out. The earliest warning sign that Poyser was a bust.

Tonight I'm hoping for a similar first 35 mins, only with our guys all staying healthy and closing it out behind Banks and other's veteran leadership. Also hoping there are no early, obvious candidates for the next Poyser.

Really no idea. St. Francis was bad last year but brings back a surprising portion of their core despite the portal/NIL era. Our bigs will get an immediate test tonight against St. Francis' returning leading scorer and rebounder -- 6'10 Josh Cohen. Could be a long night under the rim.
R

Community Bank 3Pt Tee said:
I'm not usually a fan of comparing years, but roster DNA similarities to 2018/2019 are there. I'm reminded of the opener, too.

Stockard was out, Kaputo was hobbled. We controlled throughout, and fell apart the last 5 minutes. Not coincidentally, the wheels came off after Griffin went down. We couldnt close it out. The earliest warning sign that Poyser was a bust.

Tonight I'm hoping for a similar first 35 mins, only with our guys all staying healthy and closing it out behind Banks and other's veteran leadership. Also hoping there are no early, obvious candidates for the next Poyser.
Click to expand...

That Bucknell team with Nate Sestina was a damn sight better than this St. Francis is likely to be.

res said:
That Bucknell team with Nate Sestina was a damn sight better than this St. Francis is likely to be.
Click to expand...

Yes. That was a good Bison squad. In terms of tonight, it’s equal parts terrifying and exciting to have basically no idea what to expect from the team.
R

Exactly, Bill. I'm really looking forward to this season precisely because I have no expectations good or bad. I think it's safe to rule out the postseason, but other than I've got nothing. It will be interesting.

res said:
Exactly, Bill. I'm really looking forward to this season precisely because I have no expectations good or bad. I think it's safe to rule out the postseason, but other than I've got nothing. It will be interesting.
Click to expand...

With Schmidt I never rule out the postseason. The talent is there. I believe he’ll have this squad playing well by conference even if it means playing without a true center.
B

Yeah, I can’t rule out the postseason yet, simply because we don’t yet know what we have with this team. Let’s Go!

I was pleased with how they played last night for the most part. The final 8 or so minutes of the 1st half left some to be desired but overall they did well. You cant expect them to come out perfect the 1st game with all the new players. The bigs seemed a little more together than they were in the Alfred game. Venning should probably be starting and I think he will be sooner than later. That is not to say Mellouk isnt good, he has some skill but he doesnt have the size to match up with a good big and SFU had a good one. Soon as Venning came in, he shut that shit down for awhile. That said, we will struggle when we face teams with a good front line.

I liked how they came out for the 2nd half and immediately went on a run, good job by the coaches. Im excited to see Evans, Luc and Banks for the next couple years. They could really be a good trio.
B

Pretty darn impressed with Barry’s overall game. Defense, hustle and rebounding will always get one in Schmidt’s good graces. Also love that he doesn’t go up soft around the rim. Mellouk definitely going to struggle against taller, stronger bigs but for a guy that redshirted last year he at least gave some serviceable minutes. A little dicey when Luc had to sit, no Rumpel or Flowers definitely hurt. Time to hammer the Griffs!

Luc and Banks were as advertised. Solid players ready to step in at an A10 caliber of play. Banks might need some time to get used to playing 40 minutes a night or Schmidt might need to have a guard rotation. But seriously I hope Banks can adjust to the minutes load.

Evans reminds me of a skinny Denzel Gregg. He is asked to do more than Gregg was as a freshman or sophomore and if he buys in to the program he will be a beast by the end of the season. I think he was the best athlete on the floor last night by a mile and has decent bball skills. With only watching one game I would guess he is a 30 minutes a night guy before long.

As we all expected the 4 and the 5 are giant question marks. Hill and Farell had similar stat lines and I think Hill stood out a little more when he was on the court but that could be a true timeshare for a while. Mellouk could challenge for minutes at the 4 if another big steps up or against bigger teams.

I am not sold on Mellouk being able to guard bigs but we might need him to eat some minutes at the 5 since Venning and Amadasun are foul happy and good for a moving screen a game. If we are going to run a heavier pick an roll offense rather than the motion offense we saw in recent years Mellouk might be the best option. That might require us to play more junk defenses to give him help on the block.

I feel bad for Flowers and Rumpel if they dont get back soon, will be interesting to see how Schmidt works them in. We might see 10 guys play on Saturday. 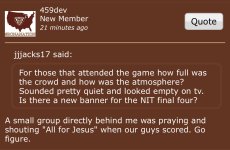 res said:
That Bucknell team with Nate Sestina was a damn sight better than this St. Francis is likely to be.
Click to expand...

Good point. Not to drift too far down memory lane, but based on how poorly that season started, it's easy to forget that was a solid Bucknell team. The way the results unfolded in the few weeks to follow without Stockard, it makes that game more of an anomaly in retrospect.

Great way to start out the year. I hope Schmidt keeps the rotations. It keeps the guys engaged knowing any moment they could be on the floor instead of playing the role of practice squad/cheerleaders. The fast pace of play is a joy to watch compared to the last few years of slow, predictable sets. I hope Rumpel and Flowers can come back soon to give Banks and Luc some breathers -- perhaps even go big with Farell at the 2.

Barry Evans is good. I love his aggressiveness but I also recognize that a lot of his rebounds and turnovers were partly luck -- right place right time and also some below average guard play from the opponent.

Melian Martinez was the only healthy scholarship player to not see the floor. Has a decision been made on his redshirt status? If not, I have to assume that's where the coaching staff is leaning. When do they need to make an announcement?
C

Agreed with all points above. Evans had the best night of the 3, but among him, Farrell and Hill the potential is obvious. As everything starts to slow down and click for them, it will be fun to watch their development offensively, getting more comfortable attacking with and without the ball. During the stagnant period of the first half, there was a lot of hesitation and standing around. They made some good adjustments on that end in the second half.

AM will struggle at times against guys who like to play you on the blocks, i.e. Okuro, Oduro, DaRon Holmes, but I did thin he improved defensively as the game went on. I also feel reinforced that we will have the guys and the tools to remain versatile vs teams who stretch the floor with their bigs vs traditional bangers. The A10 always feaures a lot of those types of teams.

JNT is definitely still a work in progress. Hoping he sticks with it.

Excited to get Flowers back, hopefully this weekend. A goose egg against Alfred is mildly concerning, but his stats from last year didnt happen by accident. It'll be good to fit another guard into the mix.

Martinez makes freshmen Shoon looks jacked. I can't imagine him making any impact until he bulks up a good deal.
R

The fast pace in general is fun to watch. The fast pace of play with the 1st guy to cross the center line jacking up the quick three ball, not so much.
Last edited: Nov 8, 2022
1

Good stuff here not much to add. Just a couple thought.
1) I think Venning comes off the bench to avoid picking up quick cheap fouls
2) The 3/4 positions are going to have to help Mellouk on the backside of the D when he fronts the larger players.
3) When Flowers and Rumple are healthy I'd like to see a harder press after every made basket.
4) As CB3PT points out lots of stagnant ball at the end of the 1st half resulting in bad shots as the shot clock expired.
5) if Hill and Mellouck are in together, Hill could play defense at the 5 and offense at the 4.