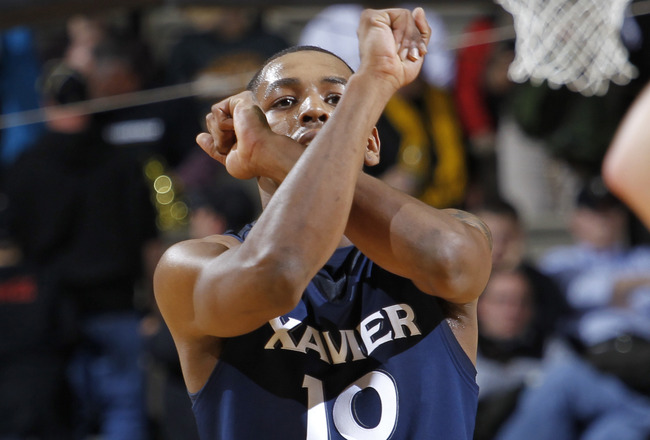 With the additions of Butler and VCU, the A10 has added some prestige to the conference (three Final 4 banners and two national title game appearances). But I wanted to look back a little further, and see not only what sustained success the conference newbies bring, but also how they stack up to the teams set to remain in the A10 after the exits of Temple and Charlotte. So I looked at those 14 teams records going back to the 2001-2002 season, and decided to break the Atlantic 10 up into four tiers: the elite, best of the rest, the inconsistent, and the bottom feeders.

1. Xavier (271-99 overall record, 72.9% winning percentage) – The toughest part of this whole thing is deciding whether Xavier or Butler lands in the top spot. What has more weight? Back-to-back national title appearances, or basically a decade of consistent NCAA tournament appearances in wins? Ultimately I sided with the Musketeers. Not only do they slightly edge out Butler in winning percentage (by 0.3%) and overall wins (3), but they had ZERO losing seasons (Butler went 13-15 in 2004-2005), missed the NCAA tournament just once over that span (to Butler’s five), and won a tournament game all but three of our 11 measured seasons (with multiple wins in five of their appearances including two Elite 8 years).

2. Butler (268-101, 72.6%) – As mentioned above, how many teams can you name off who have appeared in back-to-back national title games? Well there you go. Not only can Butler boast the second-best winning percentage in the new A10, but they also tie Xavier for the most NCAA tournament wins at fifteen, and have multiple tournament wins four out of our 11 measured seasons, second to only Xavier. They have missed the NCAA tournament five of the past 11 seasons, but have appeared in a postseason tournament nine of those years.

3. VCU (259-104, 71.3%) – Surprise, the last of our elite group is also a new addition to the conference. The only other team with a 70%+ winning percentage, VCU has been consistent outside of their magical First 4 to Final 4 season, winning 20+ games eight of the past 11 seasons, and doing no better than 18 wins over that span. The Rams from Richmond have punched a big dance ticket three of the last four seasons, and four of the last six, and have won seven NCAA tourny games over that span — just one less total than the combined effort of all the teams ranked below them.

Second Tier: Best of the Rest

4. Dayton (236-123, 65.7%) – Choosing between Dayton and St. Joe’s here is almost as hard as choosing between Xavier and Butler for the top spot. The Flyers however get the nod based on overall winning percentage, coming in almost six points higher, and adding one more post season appearance than their winged-rivals from Philly. Like VCU above them, they also have eight 20+ win seasons, five of which have come these last five years. In their three NCAA tournament appearances they’ve managed just one win (’08-’09) but are consistently a threat to stack wins with one of the toughest home-court advantages in the country.

5. St. Joe’s (212-142, 59.8%) – Definitely stronger at the beginning of the decade, but seem to be putting something together again. The Hawks followed their incredible 30-2 Jameer Nelson/Delonte West lead Elite 8 season with two NIT seasons before making it back to the dance in 2008. After that, the Hawks trended downward, compiling back-to-back losing seasons before making it to the NIT and winning 20 games just last year.

6. Richmond (196-159, 55.2%) – The Spiders made it back to the Sweet 16 two seasons ago, threatening a rematch with crosstown rival VCU before falling to the Kansas Jayhawks in San Antonio. It was over two decades since they had accomplished such a feat, but since Chris Mooney’s arrival on campus, the Spiders seem to have turned their program back around. Three NCAA tournament appearances in the past decade, including two over the past three years, and three 20+ win seasons over the past four.

7. Rhode Island (182-166, 52.2%) – Sure, there are a few teams that have won a higher percentage of their games, but outside of three MISERABLE…and I mean just TERRIBLE seasons (7-19, 6-22, 7-24), Rhode Island has been pretty solid. Five 20+ win seasons, seven with 19+ wins and six postseason appearances including five trips to the NIT have at least given Rhodie fans a reason to watch through the end of the season. Dan Hurley on paper at least seems to be the guy to get the boys in blue back to winning games, and who knows, maybe in an NCAA tournament.

8. St. Louis (188-158, 54.3%) – Not a lot to brag about over the past decade+ outside of having one of the most interesting mascots in sports. That said, St. Louis checks in at No.8 after managing more winning seasons than losers over the past 11. Rick Majerus has this St. Louis program destined for big things, and notched the Billikens first NCAA tournament win since 1995, almost taking them to the Sweet 16 before falling in a tough loss to top-seeded Michigan State. Outside of that there isn’t much else. A CBI appearance and two ineffective trips to the NIT don’t really move the needle.

9. George Washington (176-149, 54.1%) – Outside of a great three-year stretch, the Colonials have been hurting. From 2004-2007 GW went a gorgeous 72-20 and danced three straight times, but just two post season tournaments compared to six losing seasons outside of that have had students of one of the nation’s most expensive schools feeling ripped off on the court.

10. UMass (176-165, 51.6%) – If these rankings stretched a decade earlier the Minutemen would be near…scratch that, AT the top. But it doesn’t. And since John Calipari left UMass in shambles, they’ve yet to return to glory, going under .500 in six of their last eleven season. Ah, but there is hope for the Minutemen…a 25-12 season under fourth-year coach Derek Kellog and a trip to the NIT Final 4 this past season. Could Kellog have UMass poised for their second-straight winning season? A newly strengthened A10 may have something to say about that.

11. Duquesne (137-167, 45%) – The Dukes have actually had a solid second half to the decade, winning at least 16 games their last five seasons. But once you start looking prior to ’07-’08, it gets ugly. Five straight losing seasons to begin our sample including three with single-digit wins. Not pretty, but better to have that fading in your rear view than as your present situation.

12. La Salle (155-181, 46.9%) – Eight losing seasons over the past 11, but none quite as bad as Duquesne’s, having ending each season with at least 10 wins. Also like the Dukes, La Salle has reason for hope, winning 21 games this past season and making an appearance in the NIT.

13. St. Bonaventure (128-195, 39.6%) – The Bonnies looked great last year with Andrew Nicholson leading them all the way to an A10 Championship and an NCAA tournament appearance. That SHOULD have been enough to keep them out of the bottom two positions, had it not been for their five single-digit win seasons including a Towson/Binghampton-esque 2-26 ’04-’05 campaign. Back-to-back post season appearances have St. Bonaventure headed in the right direction, but when considering their entire resume, they still check in at 13 in our rankings.

14. Fordham (97-218, 30.7%) – It’s tough when you’re St. Bonaventure and have a two-win season. It’s even tougher when you’re Fordham and have TWO of those in our sample, and a three-winner to throw on top of that. Good news is you still get to live in one of the greatest cities in the world (NY, NY baby), and are a just a few subway stops away from this year’s A10 tournament at the new Barclays Center in Brooklyn.

Mat Shelton-Eide
Mat Shelton-Eide has been involved in college athletics since 2007, starting as a co-founder of VCURamNation.com where he covered the Rams all the way...
Not sure I would say Xavier rises to the top. Seems they have been there for quite a while. Title is a bit confusing.
Any length of time has it's issues, but the last 5 years would give a better indication of where a program stands and would still include 2 poor years for UMass.