What a way for Davidson to end their regular season! The ‘Cats go 1-1 this week, but the one win is all that matters. Davidson came into this week needing just one win to be in position for a top-4 finish, and they got it. On Senior Night. With 200 students in attendance. Against a likely NCAA Tournament team.

The ‘Cats regular season capped off with a two-game home stretch. In the first game, Davidson battled back but ultimately fell short to St. Bonaventure 56-53. In the second, the Wildcats grinded out a 65-57 win over VCU. The second game was the first time this season that students were allowed to attend in Belk Arena.

Today, we have officially reached March. Even though, the ‘Cats don’t play until the Atlantic 10 tournament, today marks a crucial day for their conference seeding. Davidson needs either UMass to lose at Saint Louis or Richmond to lose to Saint Joseph’s. Either of these outcomes would give the ‘Cats a top-4 finish and a double bye in the A10 Tournament. Davidson will earn a 3 seed if both happen and a 5 seed if neither happen. 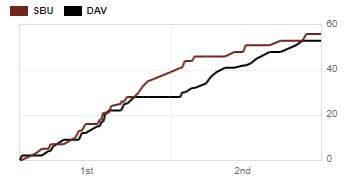 The home game against St. Bonaventure was the ‘Cats second game in a row against the Bonnies. This contest was far closer than the 69-58 defeat in Olean last Sunday, but it didn’t look that way until the end. Davidson went on about a 6-minute drought between the end of the first half and start of the second. The ‘Cats then went on a 25-12 run behind Carter Collins and Luka Brajkovic, who each scored 8 points over that run. Brajkovic’s layup with 2:29 left would tie the game at 53 after the Wildcats were once down by 14. This layup, however, was the last of the ‘Cats points. Davidson tried to hit a game-tier to send the game into OT, but the Bonnies played phenomenal defense, ultimately ending the game with Osun Osunniyi blocking Brajkovic’s last-effort three-point attempt.

The final score was 56-33. Davidson shot 42.9% from the field, but struggled again from three-point range and the free throw line, going 28.6% and 50%, respectively. The ‘Cats got out-rebounded by St. Bonaventure again. This time it was 33-30, far closer than the first matchup, when it was 39-25. Davidson totaled 13 assists, 4 steals, and 3 blocks. Carter Collins lead the team in points with 16 and rebounds with 7. Kellan Grady, the ‘Cats leading scorer, had a quiet night, only tallying 2 points and 4 rebounds.

You never want to lose a game, but the Wildcats should applaud their effort to climb back in this one. They just came back from an extended COVID pause and showed enough grit to stay with the top team in the A10 until the very last shot. The ‘Cats looked sloppy at times, but they also dealt with the same problem from the last game: the Bonnies just didn’t miss from three. St. Bonaventure went 11-21 from three-point range for the second game in a row, well above their season average. This effort was lead by Dominick Welch, who started 5-6 from three before cooling to 5-9.

Despite the loss, Davidson got a lot of things to work in this game. First and foremost: Carter Collins was back. After putting up a goose egg in the last one, Collins went 6-9 from the field and 4-5 from deep. That’s not to say everything was back to normal for Collins. Collins traveled three times in this game, which was certainty unexpected. That said, without the effort from Collins down the stretch, it’s hard to imagine that Davidson would’ve kept this game close.

The other thing that worked better in this one was the interior defense. Several times in the last game St. Bonaventure found gaps in the ‘Cats defense for easy baskets under the rim. This game was far better. Only 20 of the Bonnies points came from two-point range and they shot just over 31% inside the arc. Davidson’s big men held the St. Bonaventure forwards to only 4 points, a terrific improvement.

Davidson fell up short in many other areas. Their three-point percentage and rebounding totals were still below their averages. Sam Mennenga couldn’t get going; he went scoreless again and only played 11 minutes. Perhaps the most noticeable box score was from Grady. The star senior’s only points came from a jumper in the second half. Grady played almost the entire game but went 1-7 from the field, including 0-5 from three. This was not the same red-hot player that we saw before the pause. 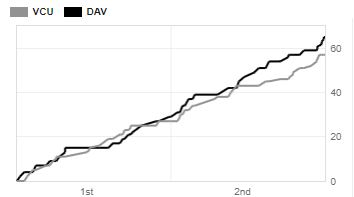 Win, win, win, win, win, win. The Wildcats had a fantastic Saturday across all sports, going a perfect 6-0 on the day. The men’s basketball win against VCU was particularly important. The game was close the entire way, but the ‘Cats stretched it out to 57-46 with 4:45 left. Davidson got its last points by going 6-6 from the free throw line to close a 65-57 win. It should be noted that VCU’s star sophomore Nah’Shon Hyland was out for this game, as well as junior guard Keshawn Curry. 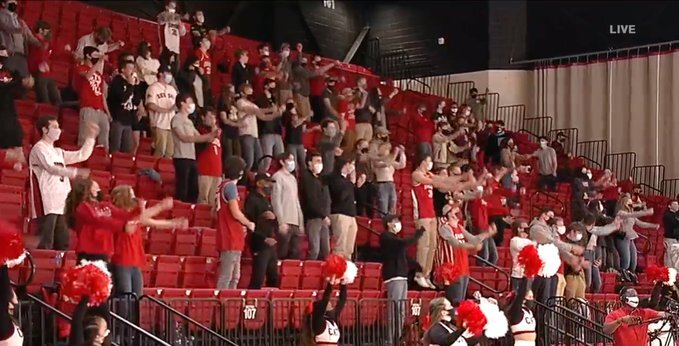 Davidson welcomed fans inside Belk Arena to see men’s basketball for the first time in a year. Almost 200 fans were in attendance, most of whom were seniors to celebrate Senior Night. All three of Davidson’s seniors started and cashed in on this special day, with 3 points from Bates Jones and Cater Collins and 13 points from Kellan Grady. The star of this game, however, was not a senior but a junior. Luka Brajkovic led the ‘Cats in scoring with 15, going to 7-9 from the field. Brajkovic was quite literally unstoppable inside the paint, bullying his way to the rim and not missing a single bucket inside the arc. As a team, the ‘Cats shot 49% from the field, 29.2% from three, and 72.7% from the free throw line. They also totaled 26 rebounds, 13 assists, 3 blocks, and a season-high 10 steals. 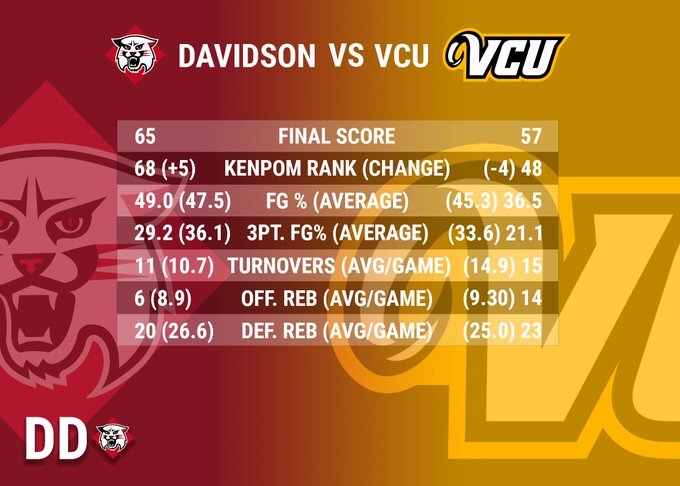 This was easily the most important game for the Wildcats this season, and they won. This win moves the ‘Cats into 3rd in the Atlantic 10 standings. Had they lost, they’d sit 7th. VCU is without-a-doubt a different team with Hyland and Curry, but VCU has still proven to be a tournament-quality team without them, as they handled Saint Louis shorthanded earlier this week. The ‘Cats should be proud to end their regular season this way. They got the job done and will look to see what their A10 Tournament seed is later tonight.

Many things went right for the ‘Cats in this one. A couple things didn’t. The three-point percentage was below their average for another game. Not a single player got hot from deep in this one, as Hyunjung Lee lead the team in made threes with only two. The rebounding also remained an issue. Going into this game, Davidson led the nation in defensive rebounding percentage. They now sit 4th, largely due to VCU snagging 14 offensive rebounds. The ‘Cats got out-rebounded 37-26 altogether. Fortunately, VCU had trouble cashing in on their opportunities. 10 second-chance points from 14 offensive rebounds isn’t the end of the world. VCU also failed multiple times to convert fast breaks and open looks in transition.

Grady stayed cold from three-point range. After going 0-5 from deep against St. Bonaventure, Grady went 1-6 in this one. St. Bonaventure and VCU seem to have had his number, holding Grady to about 6 points below his season average over the last three games. That’s not to say Grady’s Senior Night was all bad. Grady was still able to rack up 13 points by showing a great ability to get to the basket. Moreover, Grady has struggled from the free throw line this season, but ended Senior Night by going 2 for 2 from the line. Grady went 8 total games without getting to the line and going perfect on two attempts, so this was certainly a sigh of relief.

This was the first game freshmen Sam Mennenga and Grant Huffman played with fans in Belk Arena. And, boy did they play with ferocity. One might say they played with too much ferocity as Huffman committed an ultimately uncostly flagrant foul on a Jamir Watkins fast break. The freshmen duo tallied 14 combined points, with all of 5 of Huffman’s points coming in the first half. Two of these first-half points came on an incredible and-1 fadeaway jumper. Mennenga also made some nice plays with an and-1 bucket of his own, a three, and a dunk. Both have incredible talent and should be a treat to watch as they continue their Davidson careers.

Carter Collins also played tough on Senior Night. So tough that he became the first Davidson player to foul out this season not named Luka Brajkovic, who fouled out in the ‘Cats games against Duquesne and UMass. Other than this and one turnover, Collins did nothing wrong, going a perfect 1-1 from the field. Brajkovic also got in foul trouble in this contest; he tallied his third foul early into the second half, which is why he only played 19 minutes.

The fact that Brajkovic played only 19 minutes highlights how incredible a performance he had. It was simple. If Brajkovic got the ball inside, he scored. Post move, layup, you name it. He didn’t miss. The Wildcats as a whole were incredible from inside the arc today. They went 66.7% from two-point range. Davidson now sits 5th in the nation in this statistic, as they are 58.2% on the season. The ‘Cats don’t take an incredible amount of twos, but the statistic shows what an effective three-point offense can open up. Davidson’s success from two may hint at a transition for the ‘Cats. Usually a very three-heavy team, Davidson will see the return of Brajkovic, Mennenga, Nelson-Boachie Yiadom, and David Kristensen. These forwards could power the team to a lot of made buckets inside the paint next season.

As the graphic from @SBUnfurled indicates, there are only two, very-low-chance outcomes in which Davidson does not secure the double bye in the Atlantic 10 Tournament. This would be the Wildcats 4th top-4 finish in 7 years of being an A10 team. Because of this, all eyes will be on UMass’s and Richmond’s games today. If either of these teams lose, you will next see the ‘Cats in the quarterfinals of the A10 Tournament on March 5. Otherwise, they will have to first play the day before.

An at-large bid is out-of-reach for Davidson at this point of the season. In order to get to the NCAA Tournament they must win the A10 Tournament. This is quite a tall order, but they’ve shown the ability to beat any of the top A10 teams on a good day. If you’re looking for more Davidson basketball after the A10 Tournament, the ‘Cats may get a chance to play in the NIT. This would be a great opportunity for Lee, Mennenga, Huffman, Mike Jones, and others to get their first experience playing in a national postseason tournament. Unfortunately, the NIT has been cut in half to 16 teams, but teams cannot automatically qualify this year for being their conference’s regular season champions. A win or two in the A10 tournament would boost the ‘Cats’ chances to play in the NIT.

The goal, however, is not to play in the NIT. The goal is to win the A10 Tournament. We’ll see if the ‘Cats can move on to the A10 Championship later this week.

Thanks for reading. Stay tuned every Monday at 10 AM for another edition of the Wildcat Weekly! For more Davidson and Atlantic 10 coverage, follow me on Twitter @WildcatCole24.