On January 8, Rhode Island had been leading Davidson nearly the entire second half. With under a minute left, Davidson trailed by 1 and the shot clock was running down on their possession. Michael Jones hoisted an improbable shot in the paint. It’s good. This allowed the ‘Cats to take the lead and after a couple Foster Loyer free throws, Davidson won the game.

The ‘Cats were now on a 11-game winning streak. To extend the streak, they had to first beat UMass, who had been struggling to win games. They did. Next, they faced Richmond, who had also been struggling, but unlike UMass, Richmond was considered a top Atlantic 10 team in the preseason and was still a Quad 2 opportunity on the road. Moreover, the Wildcats were 5-8 against Richmond since joining the Atlantic 10. Could Davidson overcome their past struggles with Richmond to extend their winning streak? Who would step up for the occasion?

Spoiler: They did, and Michael Jones stepped up; he stepped up big time. His previous career high in points was 21, and his previous career high in threes made was 5. He smashed both of these marks. He already had 6 threes on 6-6 shooting from behind the arc by the first half. He added two more and finished 8-9 from deep with 29 points. And that wasn’t all. One of those threes was a game-winner.

Thanks to formerly undefeated Baylor and USC dropping one game (and then each dropping another), Davidson and Auburn now tie for the longest winning streak in Division I men’s basketball! With one of those 13 wins coming against then 10th-ranked Alabama, the ‘Cats are easily one of the hottest teams in the country. Now, some even view Davidson as one of the top teams in the country, period.

Davidson is now the third closest unranked team to being ranked in the AP Top 25 after 16 of the 61 voters decided Davidson was fit for billing. If they keep winning, surely they’ll earn the honor. But in the way lies one of Davidson’s most difficult challenges yet. 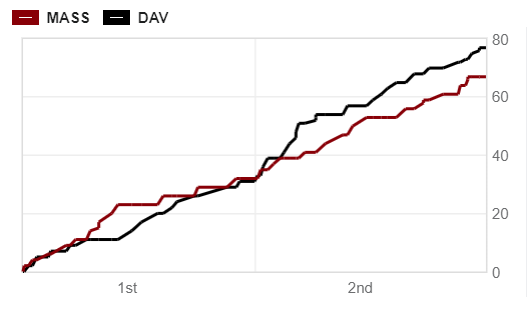 Last season, when Davidson played UMass, Davidson trailed by as many as 12 in the first half, were losing at halftime, and then won by a healthy margin. Well, history repeats itself because the exact same things happened in this one.

The game started out pretty even. The score was tied at 11 just over five minutes into the game. Then, UMass went on a three-pointer spurt, making a three, then three free throws, then a three, and then another three. UMass had their largest lead when the score was 23-11. Then, Davidson would answer right back and eventually trailed 32-31 at halftime.

At the opening of the second half, Davidson scored on their opening possession, giving them their first lead since the score was 7-6. UMass answered, but then Hyunjung Lee drained a three on the Wildcat’s next possession, giving Davidson a 36-35 lead. Despite trying to climb back in it with threes, UMass would never lead again, and Davidson would go on to win 77-67.

Luka Brajkovic had a new career-high 25 points, which led the way in scoring for the ‘Cats. Brajkovic also led in rebounds with 11 and had 3 blocks. Foster Loyer led the way in assists with 6 and also committed 0 turnovers. The team as a whole took great care of the ball in this one, only totaling 3 turnovers, half of their previous season low. The team shot 48.4% from the field, 42.3% from deep, and 50% from the free-throw line. Davidson outrebounded UMass 38-37. 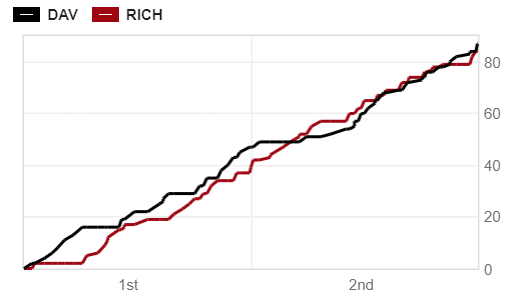 Davidson got off to an extremely hot start and led 16-2 just over five minutes into this one. Then, Richmond answered with a 13-0 run. Michael Jones ended the run with a three, and Davidson heated up again to later lead Richmond 29-19. But Richmond wouldn’t go away and responded with an 8-0 run. This run was also ended by a three from Michael Jones. Threes from Michael Jones were the story of this game. His 6-6 shooting in the first half allowed Davidson to lead 47-39 at halftime.

Davidson was able to earn this lead despite having 9 first-half turnovers, 3 times as many as they had their entire last game. Fixing this issue could hypothetically allow Davidson to dominate Richmond even more than they did in the first half. But they couldn’t. In the first five minutes of the second half, Davidson had 4 turnovers and fell down 52-51. Davidson would not regain a lead until there was just over 8 minutes left, when a three from Lee put Davidson up 68-67.

From this point, the game would stay close until the final minute. Davidson led 84-79 with 43 seconds left and appeared to be in control. But Tyler Burton kept Richmond in it with a three. Then, Richmond continued to press Davidson, as they had been most of the game, and Lee was trapped deep in the backcourt. He committed his 6th turnover, a career high, and the team’s 16th. Richmond tied it! Now, Davidson needed to score. And who better to ask than Michael Jones. This half, he had been quieter, only attempting 2 threes so far and making 1. But he drained one from deep. The CBS Sports Network announcer called it “cold-blooded.” With only three second left, Jacob Gilyard could not answer, and the ‘Cats would win 87-84.

Michael Jones’ 8-9 3-point shooting performance would propel him to lead all scorers with 29. Lee was next for the ‘Cats with 19, marking his 20th consecutive game scoring in double figures dating back to last season. Brajkovic led in rebounds with 11 and recorded 13 points, earning him back-to-back double-doubles. Loyer and Brajkovic each had 5 assists to lead the way. The team’s 16 turnovers were the most the team had since their second game of the season against San Francisco. The team shot 53.6% from the field, 48.1% from deep, and 87.5% from the line. Davidson outrebounded Richmond 39-22. Their 12 offensive rebounds marked a season high.

Michael Jones continues to be nothing short of sensational, from the miracle shots to the fact that he’s shooting 52.7% from the field, 50% from deep, and 90% from the line on the season. And Jones isn’t even the player who won A10 Player of the Week this week! That went to Brajkovic, thanks to his stellar scoring and rebounding numbers. Brajkovic has been on an uptick over his last five games against Division I opponents, which includes playing against Alabama and Davidson’s first four conference opponents. Over this span, Brajkovic has averaged 17.6 points and 9 rebounds, which is 4.4 points and 1.7 rebounds above his season averages.

There were a few outlier numbers this week, with one being Davidson having 3 turnovers against UMass and 16 against Richmond. This could be attributed to the opposing teams’ defenses, with UMass’ ranked 332nd and Richmond ranked 135th per KenPom at the time of writing. Perhaps that explains UMass, but what really explains Richmond is that they have the national leader in steals per game in Gilyard and are 58th in the country as a team in steals per game according to the NCAA. Or does it? Surely, Richmond is great at getting steals and their press in this game amplified this. The problem is that 7 of Davidson’s 16 turnovers were non-steal turnovers, including one shot-clock violation and some out-of-bounds plays. Moreover, some of the steal turnovers were simply bad passes. Given that Davidson’s next opponent is VCU, whose defense ranks 2nd in KenPom and who is 28th in the country in steals per game, this is certainly something that Davidson will need to address to win at the Siegel Center.

Getting past the negative, this win cannot be understated. Aside from being Davidson’s second-best win according to the NET, the way it went down will give Davidson another shot of momentum in case the victory over Alabama is wearing off. Davidson won at the home court of a team that was picked better than them and has beaten them the last three times. With the team having now won 13-straight and sitting 14-2 (4-0 in conference), the team’s ceiling is tremendous, and they’ll look to keep it that way this week.

Davidson has two road games this week. They’ll first be staying in Richmond to play VCU at 7 tomorrow night. The game will be broadcasted on CBS Sports Network. They then head up to The Bronx to square off against Fordham at 2 on Saturday.

The VCU game will certainly not be easy. After a bit of a shaky start, VCU has looked like a different team since returning point guard Ace Baldwin from injury. Since his return, VCU is 6-1, with their one loss being their last game, which was a 20-point road loss against St. Bonaventure. VCU seems poised to be a top Atlantic 10 team once again, and with their strong defense, they will certainly be one of the ‘Cats biggest tests this season.

Fordham is having a significantly improved season this year under new head coach Kyle Neptune. Fordham sits at 9-6 and began A10 play with their first 2-0 start in school history before falling to Saint Louis last Saturday. That said, Fordham did lose one of their best players in Antonio Daye, Jr., so Davidson should be the favorite in this one.

Thanks for reading. Come back every Monday for another edition of the Wildcat Weekly! For more Davidson and Atlantic 10 coverage, follow me on Twitter @WildcatCole24.