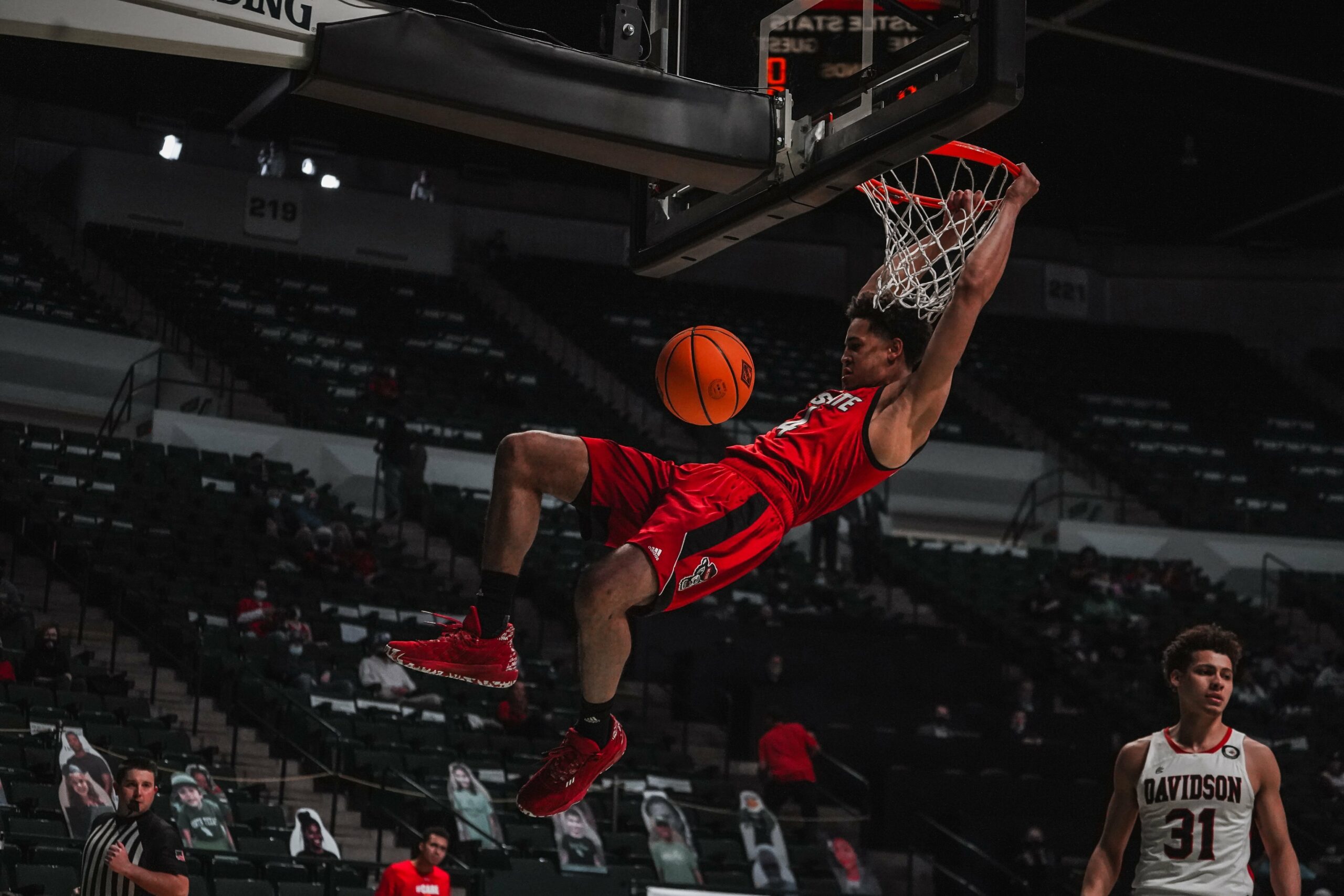 This image tells it all. Davidson got quite literally dunked on.

On selection Sunday, Wildcats everywhere waited patiently after the NCAA Tournament bracket announcement to find if Davidson would play again this season. The ‘Cats were firmly in the NIT field as a 2 seed. Their 3-seed opponent was NC State, who they played at North Texas University on Thursday. The ‘Cats did not live up to being favored. The Wolfpack led the entire way, finishing on top 75-61.

Until Sunday, it looked like this season would be the first time since the 2010-2011 season that Davidson didn’t have a chance to play one of the ACC’s four North Carolina teams. The last time Davidson played NC State was in December of 2008, when Steph Curry’s 44 points helped Davidson topple the Pack 72-67.  Going into the game, NC State led the series against Davidson 69-14.

Bob McKillop has 7 total postseason wins but was 0-4 since joining the A10. This includes losses to Iowa and Kentucky in the NCAA tournament and losses to Lipscomb and Florida State in the NIT. Righting the ship could have been a nice motivation-booster into next season. Aside from this, the matchup was the first national postseason experience for Hyunjung Lee, Mike Jones, Sam Mennenga, Grant Huffman, and other Davidson underclassman. This matchup was also important for Kellan Grady. The ‘Cats star guard sat at 1990 career points going into this game. Reaching the 2000 mark despite a shortened season and the injury his sophomore year would be an incredible feat to cap off his storied Davidson career. 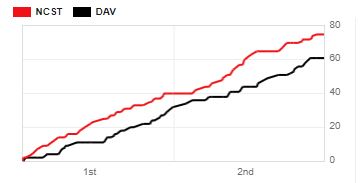 NC State got off to a fast start, stretching the lead out to 10 within the first five minutes. The ‘Cats tried to cut into NC State’s double-digit lead but struggled to get on any scoring runs. This was exacerbated by the fact that the Pack shot 66.7% from the field in the half behind several wide-open dunks and layups. Luka Brajkovic was finally able to get the ‘Cats within 10 points with seconds left on the game clock. Brajkovic showed us his rare step-back three-point jumper, which gave the ‘Cats some momentum going into halftime down 8.

This momentum didn’t show up right away. Carter Collins began the half by missing a barely-contested layup, getting the offensive rebound, and missing a wide-open putback. This highlighted Davidson’s shooting woes, especially from Collins who went 1-6 from the field. Right after, the momentum finally came. Davidson started doing something they struggled with in the first half: getting stops. Davidson cut the lead to 4, but like with their games against Texas, Providence, Dayton, and others, they never had the juice to jump out in front. The Pack eventually stretched the lead out to 21 before finishing the game with a 75-61 victory.

Although NC State’s players put on most of the highlight reel, the ‘Cats had one special moment themselves. With less than 3 minutes in the first half, Grady sat at 1998 career points. He then made a layup to become the sixth Davidson player to reach the 2000-point mark. The star senior finished with 12 total points by the end of the game. 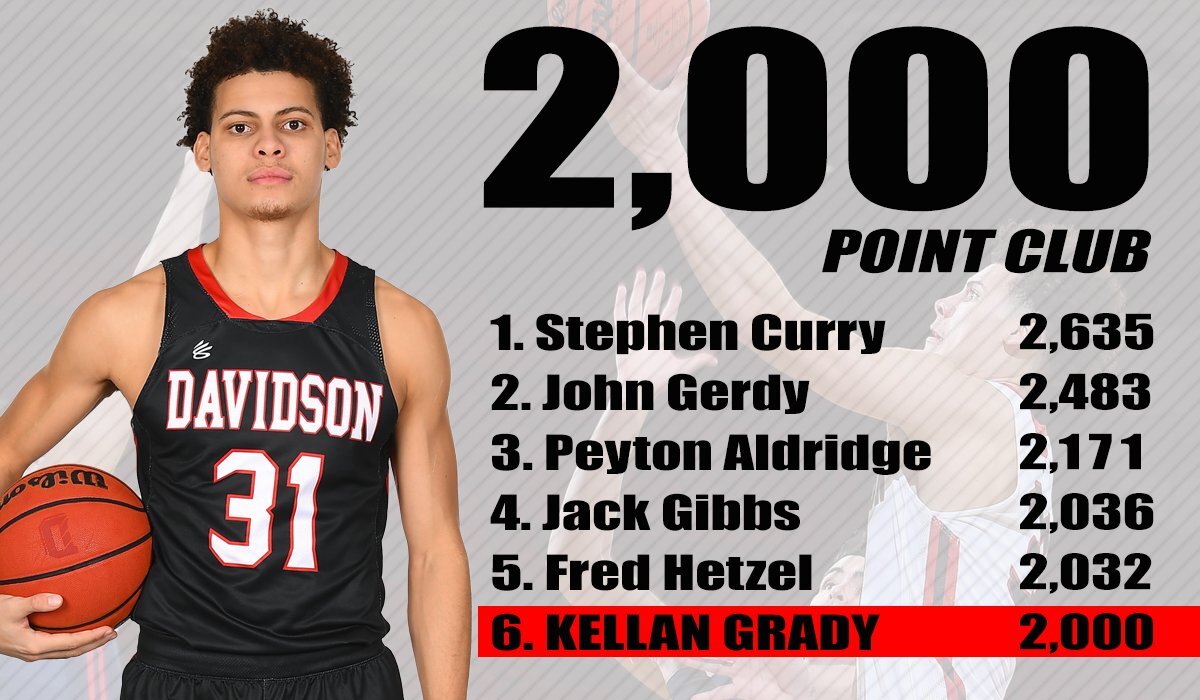 NC State’s shooting cooled to a still-impressive 58.8% from the field. All three of the Wolfpack’s starting forwards had double-digit point totals, with DJ Funderburk leading the way with 21 points. Brajkovic led the ‘Cats in scoring with 15 points. Grady and Lee also had double-digit points, as did sophomore guard Mike Jones off the bench. Freshman forward Sam Mennenga led the team in rebounds with 6. Overall, the Wildcats shot 44.2% from the field, 29.2% from three, and 72.7% from the line. The team racked 24 rebounds, 14 assists, 5 steals, and 3 blocks.

This game was certainly winnable for Davidson. KenPom projected them to win by 2 points. NC State has been missing their leading scorer, Devon Daniels (G), since January 27 as well as another starting guard, Thomas Allen, since February 17. Beverly has also been dealing with back spasms, limiting his playing time this year. The Pack are also not the biggest Power 5 team out there, and Davidson plays significantly better when they’re winning the war on the glass. Due to some smaller NC State guards, Davidson players actually average over an inch taller than NC State players. So why did Davidson fail to beat another Power 5 team?

The statistic with height is misleading because it ignores how big and athletic the Pack’s starting forwards are. College basketball fans who follow major statistics all know Manny Bates, NC States’ 6′ 11” sophomore who averages 2.7 blocks per game. Funderburk and Hellems also sit at 6′ 10″ and 6′ 7″, respectively. But it wasn’t the height that put the Pack past Davidson; NC State only outrebounded Davidson by 5. Many voices online tend to blame Davidson’s woes against Power 5 teams to a lack of athleticism. As @BelkReport argues, these claims are also questionable. Bates’ and Funderberburk’s athleticism, nonetheless, was on full display Thursday. Both found great ability, especially in the first half, to get open and make towering dunks off great passes from Cam Hayes and Beverly. Davidson attempted some alley-oops themselves, but could not complete these momentum-swinging plays. 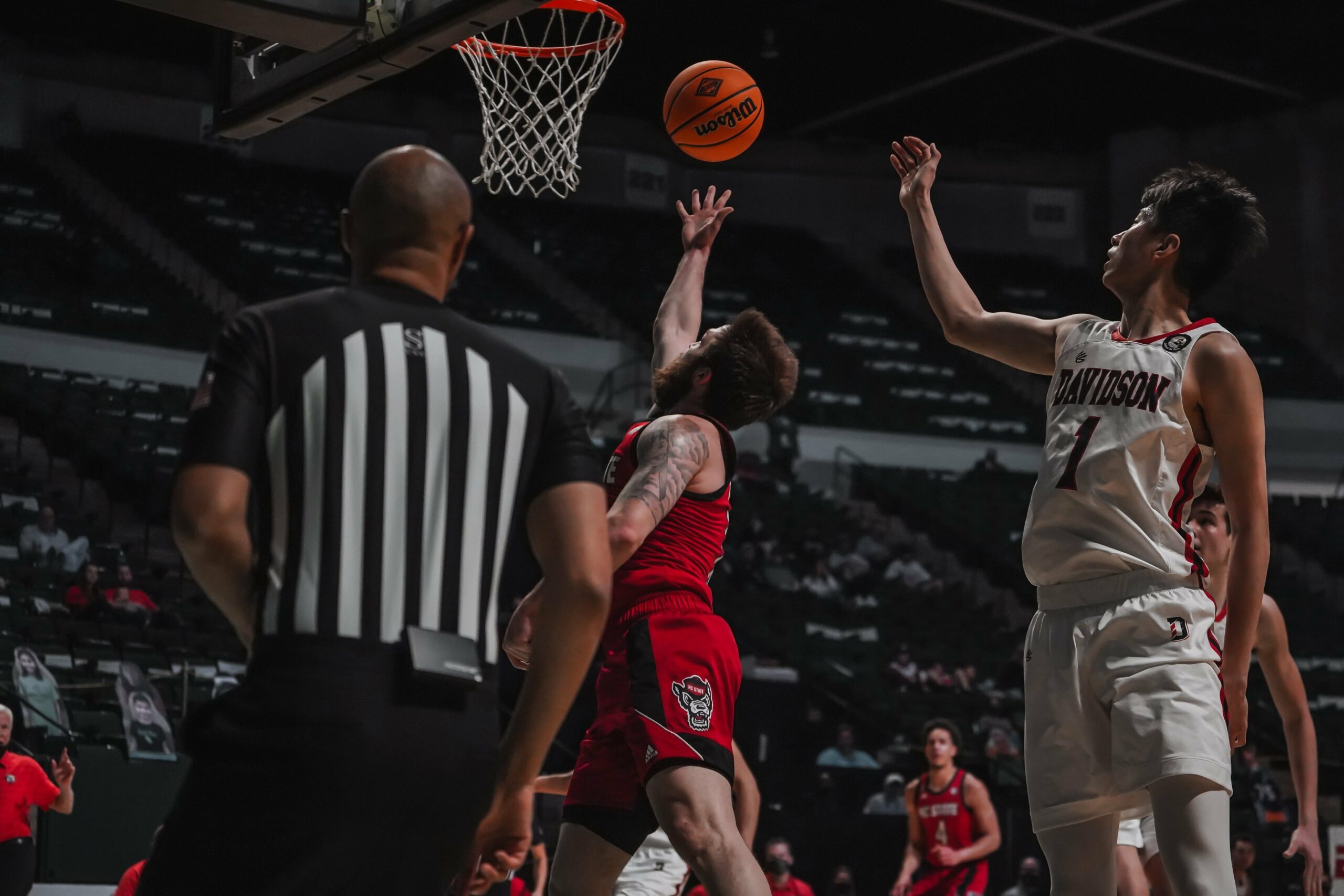 Others claimed that NC State brought more effort. Braxton Beverly certainly brings an undeniable grit to the court. The 6-foot senior played tough. Although he only finished with 7 points, he earned all of them with show-stopping finishes to the baskets. That said, it’s hard to imagine there’d ever be an instance where a McKillop-led team isn’t giving 100%. Thus, it’s unfair to blame the loss on size, athleticism, or effort. So is it a mental inability to beat all but below-average Power 5 teams? That likely doesn’t tell the full story either. Davidson could have won; they didn’t. And there isn’t one major takeaway to explain this.

There were some positives. Most importantly, the experience the underclassmen gained. Grant Huffman becomes a primary target of this topic. The freshman guard has big shoes to fill next year; without Carter Collins and Kellan Grady, Huffman will run the point more frequently next season.

If you’ve watched any of Davidson’s last three games, you can tell McKillop is intentionally giving Huffman experience in postseason moments. Huffman had a nice comeback this game after posting two goose eggs during the A10 Tournament. The freshman had 6 points off the bench. Huffman still struggled with turnovers, as he committed 2 Thursday, including a ball-handling issue in the second half. Perhaps the greatest indicator of Huffman’s potential is not the points or the turnovers but McKillop’s commitment to giving him minutes. Huffman’s growth will be one of the most exciting things to monitor going into next season.

So, this is it. Davidson’s 2020-2021 season is over. The ‘Cats are back from North Texas, hopefully enjoying a nice offseason. Kellan Grady, Carter Collins, and Bates Jones played their last games Wildcats. They have been a pleasure to watch, and fans will look forward to see where their trust, commitment, and care take them in their future careers, basketball or otherwise.

There are a lot of questions heading into next season. How will Bob McKillop reinvent Davidson’s offense? How will the new recruits be? Will the team land any transfers? Who will replace Collins and Grady in the starting lineup? To answer these questions, Davidson will have to finish a likely busy offseason. Until then, it doesn’t make sense to take a full dive into next season.

Perhaps the main question that must be answered is, “Who will be ‘The Guy?'” Davidson won’t have Jack Gibbs, they won’t have Tyler Kalinoski, they won’t have Peyton Aldridge, they won’t have Jón Axel Guðmundsson, and now they won’t have Kellan Grady. Having A10-Player-of-the-Year type players is nice, but it’s up for discussion whether having a star player is completely necessary. Nonetheless, losing Grady will certainly leave a hole in Davidson’s offense. So far, it isn’t obvious whether Lee, Brajkovic, one of Davidson’s talented freshmen, or someone else will fill this hole. @richmondcat5 puts it nicely. Kalinoski was not putting up crazy numbers as a freshmen and ended his career as the A10 Player of the Year. You never know if a player like Mennenga or Huffman could follow a similar trajectory.

It will be exciting to see what identity the ‘Cats take on next season. Who will rise to the challenge? Stay tuned.

Thanks for reading. The Wildcat Weekly will be published weekly again next season. For more Davidson and Atlantic 10 coverage, follow me on Twitter @WildcatCole24.