It’s the most wonderful time of the year, and Davidson has an oppurtunity to wrap a bow on what’s been a solid nonconference performance. The ‘Cats have won 7 straight and are currently at 8-2. They lead the Atlantic 10 in the NET and KenPom rankings, sitting at #54 and #59, repspectively. They’re also 7th in the country in effective field goal percentage, 4th in three-point percentage, and 24th in defensive rebounding percentage.

Davidson’s only two losses are to the very impressive San Francisco Dons, who were undefeated until two days ago, and a solid New Mexico State team. Because their remaining nonconference opponents are #10 Alabama and a Division III school, the ‘Cats will finish with no nonconference losses to teams outside of KenPom’s top 125. This hasn’t happened since the 2016-2017 season. But, while Davidson has no bad losses and has had some dominant wins, they are 0-1 against teams inside KenPom’s top 100. They’ll have a chance to improve that tomorrow against Alabama. 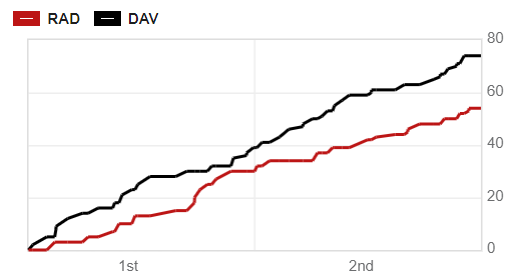 Davidson entered this game with hopes of extending a six-game winning streak and did just that. Davidson led the entire way to earn a 74-54 victory over the Radford Highlanders.

The ‘Cats got off to a quick start, with a 15-point lead just 10 mintues into the game. With five minutes left in the half, sophmore Sam Mennenga got called with a technical foul, and soon after the Highlanders made it a two-point game. Davidson held them off and had a nine-point lead going into the half.

The second half was all fun for the ‘Cats, who slowly extended their lead. Senior Drew Dibble would finish the scoring for the Wildcats with a three assisted by Styrmir Thrastarson, giving Dibble his first bucket of the season. This put Davidson up 22, their largest lead of the night, and they would finish on top 74-54.

Foster Loyer led the team in scoring for the second time in a row with 24 points. Mike Jones, Hyunjung Lee, and Luka Brajokvic also finished in double figures. Lee and Brajkovic led the team in rebounds, with six each, roughly one shy of each of their season averages. Mike Jones tied his career-high with three steals.  Jones already has more steals this season than in any previous season; he averages about two a game. As a team, the ‘Cats shot 55% from the field, 36% from deep, and 80% from the line.

Loyer staying hot is exactly what you want to see; he put up a career-high 35 against Northeastern in the last competition and followed it up with 24. While shooting 40% from deep against Radford is below his average, he remains top-20 nationally in that statistic. Loyer is not just shooting well. His assist-to-turnover ratio over the last two games is 4, about twice as high as it is on the season. These are all fantastic signs for Davidson’s new point guard.

Lee shot 1-4 from deep. This may be concerning on paper, especially given that he shot 4-12 in the last one, including a streak where he missed 7 in a row. He has shot 32% over the last three contests, which is well below his average of 40%. The encouraging thing to remember is that Lee’s production is still there. He has scored in double figures in all 10 of Davidson’s games. He is only .2 points per game back of leading the conference in scoring. Elite shooters like Lee are not going to shoot out lights out every night, and Lee has found plenty of ways to score other than shooting the three ball.

Davidson’s big men have also not necessarily been lighting up the stat sheet lately. Earlier this season, Brajkovic had five-game streak of scoring in double figures. Since then, he’s been up and down, with point-totals of 3, 16, 4, and 12. Mennega also began the year with a double-double in the first game and one rebound short of a double-double in the second. Since then, he has only posted double digit points twice. There’s no reason to be concerned by any of this, either. Brajkovic and Mennenga have certainly not “looked bad” and their shooting percentages reflect this. It seems sometimes the gameplan is to rely on them for scoring, and sometimes it isn’t. And the team is winning. How much the two are involved in Atlantic 10 play will certainly be something to watch, especially for Mennenga, who will continue to be a vital member of this team through the 2023-2024 season.

The last starter, Mike Jones, has been nothing short of spectacular this season. Perhaps an under-the-radar candidate for the A10’s most-improved, the redshirt junior averages about 12 points a game, more than double from his last two years. Maybe you expect the increased output, given that Jones is starting for the first time this season. What you may not expect are the shooting percentages. He is shooting 49% from the field, 41% from deep, and 93% from the line. That free-throw percentage is nearly 30 points higher than it was in each of the last two seasons! Jones also has an assist-to-turnover ratio of about 3.3. It would serve no point to talk about the specific numbers from the Radford game because Jones has had similar numbers in pretty much every game this season. He is consistently scoring, limiting turnovers, and even getting steals. Davidson fans will look for him to keep it up against Alabama.

Davidson’s bench was not very productive against Radford, totaling seven points. Dibble’s late three actually made him the leader in points off the bench. For a Davidson team that feels pretty deep this year, this isn’t exactly what you want to see, but the leaders in scoring off the bench, Grant Huffman and Des Watson, have shown flashes of excellence this year, and it will be no suprise if their involvement increases this season and beyond. 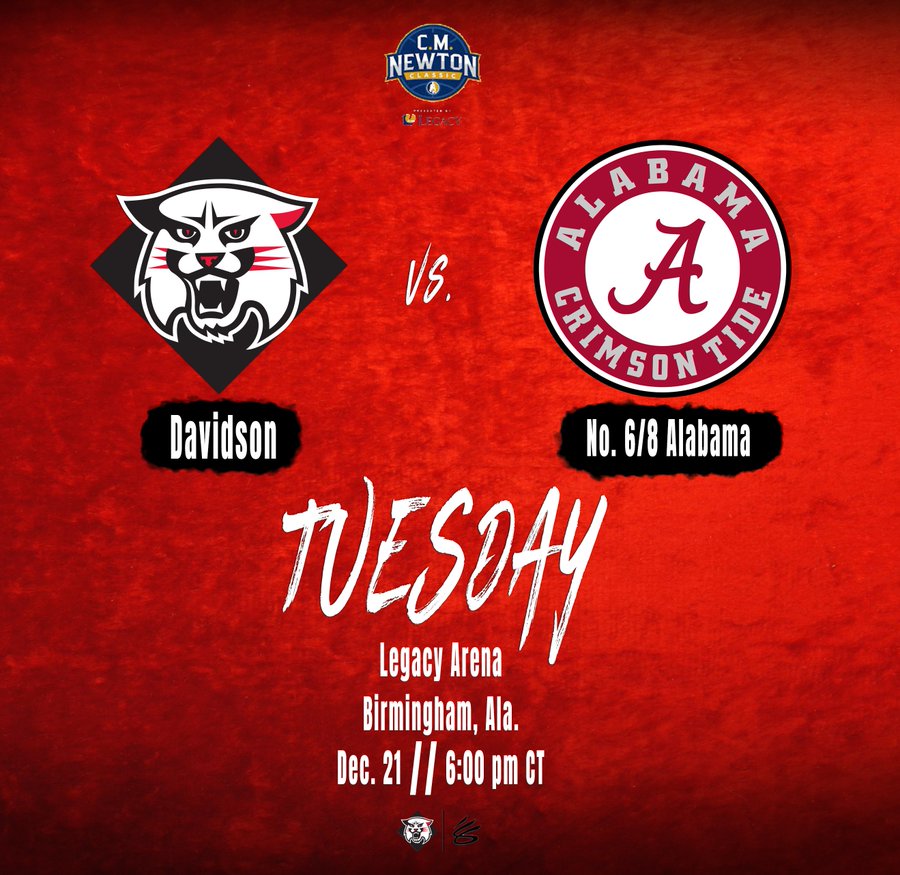 Tomorrow night is a massive oppurtunity for Davidson. They face #10 Alabama at 7 P.M. in Legacy Arena, which is in Birmingham, Alabama, a neutral site. This will be Davidson’s second Quad 1 oppurtunity of the season, with the first being over a month ago against San Francisco. Davidson doesn’t draw top-10 opponents very often; they only have five times since joining the A10 in the 2014-2015 season. And three of the five were against UNC, a team Davidson played six seasons in a row from 2013 to 2018. Davidson did beat #11 Kansas in 2011, but have not defeated a top-10 team since Steph Curry and Davidson defeated #8 Georgetown and #6 Wisconsin in the 2008 NCAA Tournament.

Alabama is led in scoring by the guard trio of Jaden Shackleford, Jahvon Quinerly, and Keon Ellis. Each of them average double figures. J.D. Davidson, who was the #15 ranked recruit this season by ESPN, starts games on the bench but still averages 24.5 minutes a game, is fourth on the team in scoring, and leads the team is assists (4.5 APG). Alabama’s starting center, Charles Bediako, was the #35 ranked recruit by ESPN, and KenPom lists Bediako as 23rd in the country in block percentage.

Alabama and their productive backcourt will certainly be a test for Davidson. The Crimson Tide had a convincing win against the preseason #1 Gonzaga and also beat a ranked Houston team. That said, the team is not infallible. They lost to two unranked teams this season, Iona and Memphis. In just their last game, they struggled a bit with Jacksonville State and only beat them by six despite being favored by much more. Earning a win will not be easy for Davidson; they’ll need to do a lot of things well. But, as they say, shooting from deep is the great equalizer in college basketball. And if there’s one thing Davidson has proven they’re good at this season, it’s exactly that.

After Alabama, Davidson has a quick turnaround back to Belk Arena to face Johnson and Wales, a Divsion III program, the next day at 1 P.M. This replaces Davidson’s home game against Loyola Chicago, which was canceled due to COVID-19 protocols within Loyola Chicago’s program.

Thanks for reading. Stay tuned every Monday for another edition of the Wildcat Weekly! For more Davidson and Atlantic 10 coverage, follow me on Twitter @WildcatCole24.