There’s something special about college basketball: every team is in it until the very end. The Atlantic 10 Tournament bracket was set. Davidson was the 3 seed for the second time in Atlantic 10 history, the other time being in 2018. That year Davidson made their only A10 finals appearance and won 58-57 over Rhode Island. For moments this tournament, it seemed that Davidson was going directly to Heaven: the NCAA Tournament. They won their first matchup 99-67 over George Mason, playing in an almost unbeatable fashion. We would soon find out that Davidson was actually going directly the other way.

Davidson lost their semifinals matchup 52-64 to VCU, playing in an extremely beatable fashion. Shots were not falling. There were terrible turnovers. There were bad shots. Davidson’s NCCA Tournament dream was over, and the team headed back to Davidson, North Carolina after potentially playing their last game of the 2020-2021 season.

That’s the other side to what makes college basketball so special. Because every team is in it until the end, unless you are going dancing, you’re going to end the season with a sour taste in your mouth. This taste was exacerbated by how rough of a semifinals performance Davidson had. I encourage Wildcats fans to look at the season in a different way, ignoring how it ended. Compared to how the team was projected to perform, this season was fantastic. There were bumps along the road; that’s for sure. But it’s good to remember that a third-place finish and semifinals appearance was far better than pundits projected. The ‘Cats cemented their position as a consistent A10 powerhouse.

The Wildcats week really began on Monday. It seemed extremely likely that the ‘Cats would finish fourth in the conference. According to @SBUnfurled, this had a 74.3% chance of happening. Then, the scores on Monday came in. Dayton upset the top team in the conference, St. Bonaventure, on the road. Saint Louis destroyed UMass. Richmond fell to Saint Joseph’s in a stunning fashion. These results had a 1.5% chance of all happening. The third game is the result that really matters. Matt Grace of Richmond had a game tying three on an inbounds pass, but it was just a hair after the buzzer. Richmond, the team picked to win the A10, would’ve finished third had they won. Instead, they finished eighth.

With UMass losing, Davidson achieved their fourth double bye in seven years of being in the Atlantic 10. But with the additional Richmond loss, Davidson achieved its fourth top-3 finish. Had Davidson lost to VCU in their previous game, Davidson would’ve finished all the way down in eighth. The Wildcats were picked to finish seventh in the conference, so finishing 3rd is a fantastic feat. And it had major tournament implications. If Richmond lost, Davidson’s quarterfinals opponent would’ve been a scary Saint Louis team. Instead, they would face the winner of George Mason and their second round opponent. 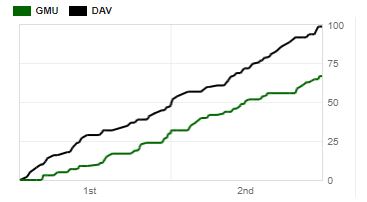 Davidson drew George Mason for their quarterfinals matchup in the Robins Center. The Wildcats put on an offensive clinic. Davidson led the entire way. The team totaled 99 points, an absolutely ridiculous number for a team that takes far fewer possessions than most teams. George Mason totaled only 67, giving Davidson their largest victory against an A10 opponent. The ‘Cats shot a season-high 59% from the field, a season-high 54.8% from three, and 83.3% from the line. Davidson totaled 34 rebounds, 14 assists, 9 steals, and 0 blocks.

Kellan Grady led the way with a masterclass performance. The senior notched a season-high 32 points and added 6 rebounds and 3 assists. Grady shot lights out, going 10-16 from the field, 4-8 from three, and 8-8 from the line. Hyunjung Lee also played incredibly, totaling 20 points. Luka Brajkovic and Bates Jones achieved double digits points as well, with 17 and 11, respectively.

You could not ask for a better performance. The shooting percentage totals were absolutely ridiculous, and they held George Mason to a ridiculously low shooting percentages too. This did not happen because George Mason is bad. The Patriots were arguably the hottest team in the A10, coming into this game on a five-game winning streak, including a road victory over VCU. The Wildcats simply had everything locked in.

The performance was so good that it is likely the ‘Cats best performance of the season. While the victory over VCU may look more impressive on a resume, a 32-point victory over a competent Mason team does not come easy. Aside from the shooting percentages, the ‘Cats were fantastic on the boards. Davidson outrebounded George Mason 37-28. Although Davidson is one of the best rebounding teams in the nation, this was the first time the ‘Cats outrebounded a Division 1 opponent since January 24, their last game before the COVID pause.

While the ‘Cats bread-and-butter, catch-and-shoot threes, were on full display tonight, fans also saw some of the other weapons in Coach McKillop’s arsenal. Three moves were especially effective against Mason: Lee’s mid-range jumper, Grady’s floater, and Bates Jones’ pump fake.

Grady surpassed the 30-point mark for the sixth time in his career. This was the first time, however, since his sophomore season, where he scored 31 in an NIT loss to Lipscomb. Grady also went a perfect 8 of 8 from the line, an awesome stat for a player who only shoots about 65% this season. 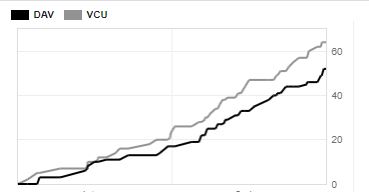 With the ‘Cats victory over George Mason, they advanced to the semifinals. This was Davidson’s sixth semifinal appearance in six A10 Tournament appearances. Due to the circumstances, this semifinals match ended up being a road game for the ‘Cats as both semifinals games were at VCU’s Siegal Center.

Unlike the first game, Davidson only led for about five seconds. The first half was especially ugly. Davidson went about 17% from the field. VCU didn’t do much better, which is why the first-half score was only 24-17. Although Davidson shot better in the second half, they could not catch up, eventually falling 52-64. The score may of been worse had Grady not drained two contested threes to close the game. On the night, the Wildcats shot 29.8% from the field, 33.3% from three, and 60% from the line. Davidson also totaled 14 assists, 4 steals, and 2 blocks. VCU out-rebounded Davidson 39-34.

Although Grady’s late threes allowed him to tie Lee on top off all scorers with 13, Lee put on the best performance for the ‘Cats. Lee went 3-7 from the field, with all of the made shots coming from behind the arc. Lee also went 4-4 in free throws and had 4 assists. 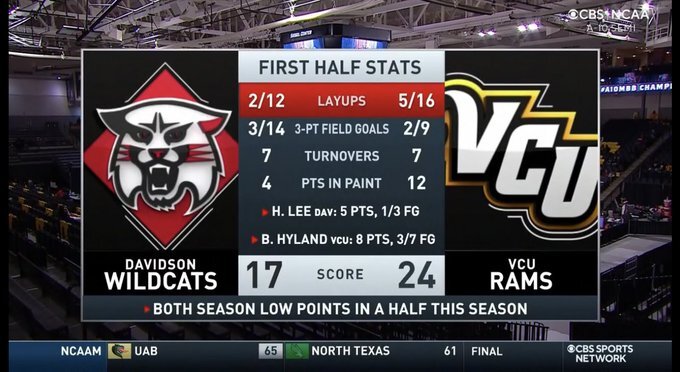 This game was the worst of times, the age of foolishness, the epoch of incredulity, the season of Darkness, and the winter of despair all at once. Unlike the last game, Davidson had nothing before them, and they will certainty be going directly away from the NCAA Tournament. The first half statistics from CBSSN say it all: this game was ugly. There’s really no other way to put it.

Bones Hyland and other Rams being healthy this time contributed toward Davidson splitting their two games with VCU 1-1. VCU’s defense was phenomenal. Their unrelenting backcourt press made Davidson players look physically anxious, contributing to 11 turnovers. They also held Brajkovic to 2-7 inside the arc after he went 7-7 against VCU the first time.  Their defense, however, doesn’t deserve all the credit for their win. Because VCU also had an off shooting night, Davidson could’ve won if they shot as well as they did against George Mason. This was not the case.

As I said before, to give this game an incredible amount of weight when assessing Davidson’s season would be a crime. Moreover, this game could end up helping Davidson in the long run. Similar to how Virginia won the NCAA Tournament the year after losing to a 16 seed, this could be a source of motivation and experience for younger players.

Davidson has seven underclassmen on the roster, all of whom had never played a postseason game due to the cancellation of last-season’s A10 Tournament. Of these seven, Hyunjung Lee, Mike Jones, Sam Mennenga, and Grant Huffman got especially valuable experience. Lee clearly rose to the occasion, being one of the ‘Cats best players in the tournament. Huffman had quite a different experience. Huffman scored 0 points in both games, despite totaling 26 total minutes. He also had 2 turnovers and somehow managed to foul out in 13 minutes during the George Mason game. It seems likely that Huffman, potentially Davidson’s future point guard, will gain a lot from this experience. He brought the ball up the court several times against a ferocious VCU press. We’ll see if Huffman comes back strong next season.

It’s unclear whether the semifinal game is Davidson’s last game this season. If it is, it would likely be Kellan Grady’s, Carter Collins’s, and Bates Jones’ last games of their collegiate career. This would be unfortunate for Grady, who currently sits at 1990 career points. In a normal season, Grady would easily pass the 2000 mark. He’ll now need another game to do it.

This game could come in the NIT. The massive win over George Mason vaulted Davidson up 14 spots in the KenPom and 12 spots in the NET. They then fell only 2 spots in both rankings after the VCU loss. They now sit at 58 in KenPom and 62 in the NET. In 2019, Davidson finished all the way down at 85 in KenPom and earned a 4 seed in the NIT due to their second-place finish in the A10. This year, the NIT will have 16 teams, half has many as usual, but there are no automatic bids for teams that finish first in their conference standings. Despite this, one would think Davidson’s third-place finish in the A10 and high rankings would be enough for the ‘Cats to play in Texas on March 17.

Pundits like @BelkReport, however, argue that even if Davidson can play in the NIT, they may chose not to participate. This season has been tough for everyone involved with the team, plus playing in Texas may be an unnecessary risk in terms of contracting the coronavirus. The only other opportunity for Davidson to play a game outside this tournament or another national postseason tournament would be a regular game before Selection Sunday (March 14). Travis Ford of Saint Louis is looking to schedule one for the Billikens, and while Davidson has announced no plans to do this and would have little to gain, anything is possible in a season like this.

Regardless of whether the ‘Cats play again, they should hold their heads high. They exceeded their Atlantic 10 expectations, and also surpassed their national expectations in essentially every metric. Davidson started at 81 in the KenPom and 92 in the NET. This is a great sign for next season because it means that Davidson is ahead of schedule. Even without Grady, Collins, and Bates Jones returning next season, there’s reason to be optimistic based on how well Davidson’s younger players performed this season.

Thanks for reading. Stay tuned for another Wildcat Weekly if Davidson plays again this season! For more Davidson and Atlantic 10 coverage, follow me on Twitter @WildcatCole24.