We are down to the final half-week of non-conference play, and we have simultaneously arrived at the start of conference play! We kick things off on Wednesday as Saint Louis hosts Loyola Chicago in the Ramblers’ inaugural Atlantic 10 game! We have one change in the rankings this week, as Rhode Island reclaims their spot at #2, thanks to an impressive performance at Wake Forest. Rhody has one final opportunity on Wednesday for a Quad 1 non-conference win as they travel to face Princeton. We’re about to kick this season into high gear, who’s ready?

Also! Be on the lookout later on this week for my annual A10WBB conference play preview post!

Past week: W vs Saint Peter’s

Past week: L at Wake Forest

Past week: W vs Wright State*, L vs James Madison*

Past Week: Idle this week

Past week: L at Villanova

Past week: W vs Cornell, W vs Howard

Past week: W vs Coppin State

Past week: W vs Ball State*, W vs Tarleton State*

Past week: W vs Charlotte

Past week: Idle this week (VCU’s participation in the Tulane Holiday Tournament was canceled due to a COVID outbreak)

Past week: W vs Elon*, W vs Idaho State*

Past week: W vs Southern Illinois

Past week: L vs Colgate

Past week: Idle this week 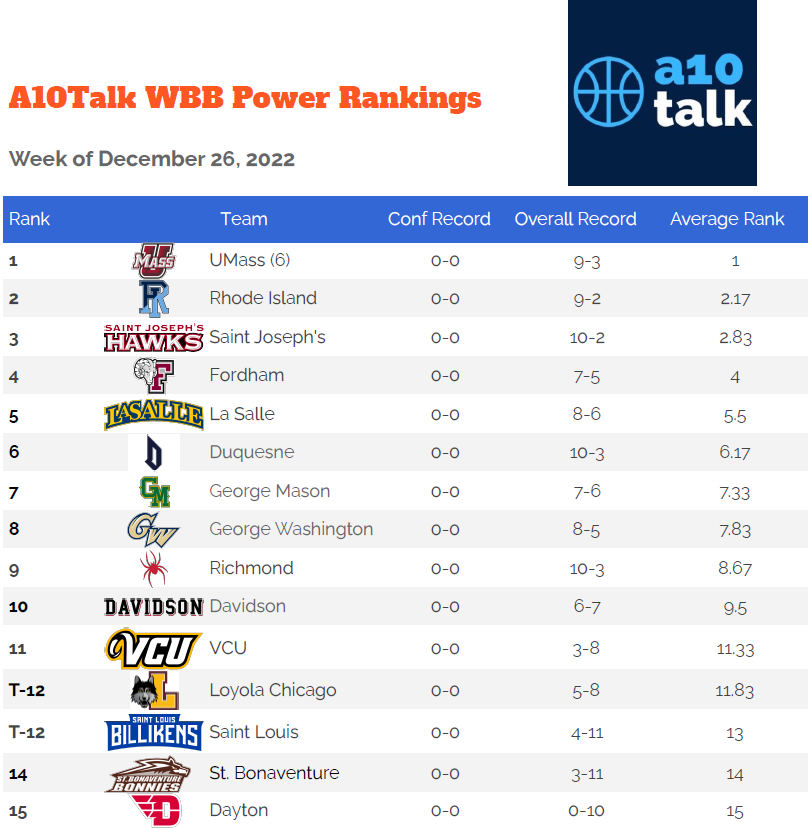