Week 6 of A10 play is in the books. We saw Dayton and Rhode Island extend their win streaks, Bona picked up a huge road win at Duquesne, Davidson struggled on the road again, and Fordham almost had the upset of the century against Richmond.  Here’s one takeaway for every team after this week.

Davidson:  Hyunjung Lee is a stud

Davidson’s freshman had 20 points on 5-8 shooting from the field and 3-5 from three.  He’s the next great shooter in Bob McKillop’s long line of great shooters.  Even in a bad loss to VCU, Lee was great against a tough Rams defense.  Consider that a good sign for Davidson moving forward. 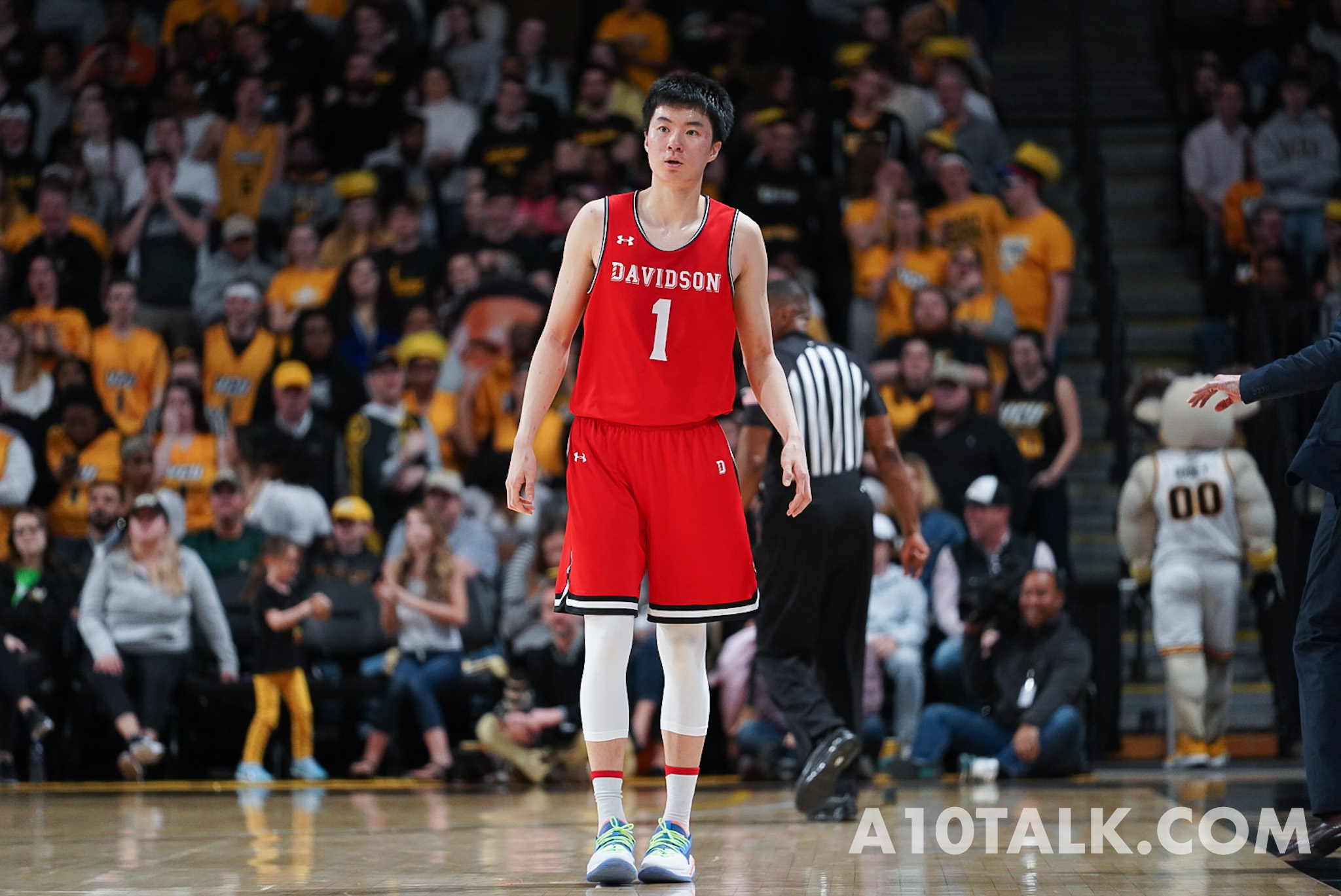 Jordy Tshimanga, the transfer from Nebraska, is the backup to Obi Toppin.  His big frame makes him a huge body down low.  Throughout the season, Jordy got in the game and was really inconsistent with what kind of player he was going to be for this team.  He has a nice lefty hook and some post moves, but he is not a huge offensive threat.  Against SLU, he played with a different kind of toughness that we have not seen before.  He battled the bigs of Saint Louis to pull down rebounds before fouling out in the second half.  He may have found his role on this team, a big body that can develop into a good rebounder who’s also good for a couple buckets a game.

Duquesne:  Top 4 is still within reach

The Dukes dropped a game to St. Bonaventure in what would have put them in sole possession of third place in the conference standings.  This game is going to be a tough one to swallow for Duquesne.  Even though they are 7-4 and are on the outside looking in for the top 4, they still have to play VCU and Dayton again, both winnable games for them.  This one stings, but it’s not over yet for the Dukes.

Have you watched a Fordham home game on TV and seen a big crowd?  I can’t remember the last time I have seen that big of a crowd from the Fordham fanbase.  That’s a great sign for them.  And the home team didn’t disappoint as they ALMOST pulled off a massive upset against Richmond.  They led at half, but they could not pull away in the second.  Still, that’s a nice crowd there today. Attendance was 2,117 out of 3,200 seat capacity. Not bad. 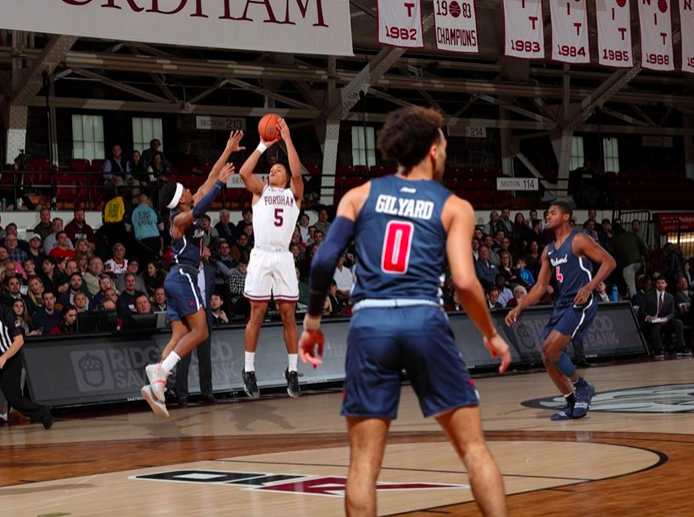 Doesn’t do justice, but that’s way more fans at a Fordham home game than we’ve seen in a while. Great to see this on a Saturday gameday in the Bronx.

Mason committed 21 turnovers.  Even though it was only two more than UMass, Mason committed many of these turnovers unforced and at inopportune times.  The Patriots had every chance to take over this game, going up by 10 early.  The turnovers were the main reason for the self-implosion when UMass started to get momentum.  Take care of the basketball and they win that one.

George Washington:  Live and die by the 3

GW shot 8.7% from three against Rhode Island.  They just could not get it done against Rhode Island and at home nonetheless.  This team is better than we all expected, but they are for sure a few years away from competing again in the A10.  This team is only going to win if they make threes. They might make it out of the bottom 4 of the conference this year, which is a plus.

La Salle:  Beatty and Croswell are the future

David Beatty finished with 18 points, and Ed Croswell finished with 14.  Beatty was lighting it up from three, and Croswell was a force down low.  He even showed flashes of driving to the hoop from the top of the key.  The next tall, athletic big man/crafty shooter combo in this league might belong to La Salle.

Whenever anyone talks about UMass, it starts with Tre Mitchell.  There’s also a dude named Preston Santos, and he’s really good, too.  Santos led the team in scoring with 17 and tied with 3 other players in rebounds with 5.  He also had two steals and one block, which was the block at the end of the game to deny a Mason layup to tie it.  Mitchell is a stud, but Santos is brewing into another one in Amherst.

Fatts is going to be Fatts, all game, every game.  I chose Martin for this role because he is this team’s glue guy.  Martin had 11 points, 5 rebounds, 3 steals, and 2 blocks in the win against George Washington.  He doesn’t have to put up a ton of points, but his all-around contributions are exactly what this team needs.  Fatts and Dowtin score, Cyril cleans up under the basket, and Martin makes it all stick together.  Rhode Island is becoming a true team at the right time.

This was a head-scratcher from Richmond.  The Spiders looked like they were about to lose to Fordham on the road, but they hung in there and found a way to win.  What was even more mind-boggling was they got their leading scorer back in Blake Francis.  Maybe it was jitters, rust, or just an off game, but Richmond scared all of Spider Nation today with that performance against Fordham.  Sweep this one under the rug, come back next week ready to go against La Salle and VCU.  Still 7-3 in the conference with a top 4 berth in their sights.

This Bona team is so different without their star big man.  Osun Osunniyi is a stud.  He can score, rebound, and block shots at an elite level.  Kyle Lofton is also a stud, but they need Osun to compliment him.  This team, yet again, is on its way to a top 4 seed in the A10 tournament.  I’ll say it again:  Mark Schmidt is a wizard.

Ryan Daly scored his usual 20+ points, but no one really helped him out throughout their game against La Salle.  This one looked like it could be their first win with La Salle also struggling in league play with only one win, but the Hawks looked tired and lost in this one.  They do get La Salle again at home as well as Fordham at home later on this season.  There’s still time, Hawk fans.

Saint Louis was right there again, almost taking down Dayton on the road.  They played a great game, Jordan Goodwin and Hasahn French did all they could, but Dayton was just a bit better on Saturday.  The Billikens should not hang their heads after this one.  If they play like this every game, they can easily get a 5 or 6 seed in the A10 tournament.

Evans, who was a first-team All-Conference player last year, has taken a huge drop off from a year ago.  The defense is still good, but his offensive game has taken a slide.  Evans finished with 19 points on Friday night, 5-9 from two, 3-5 from three, and 6-6 from the free throw line.  He is the key to VCU finishing into the top 4 and possibly taking down Dayton later this month.