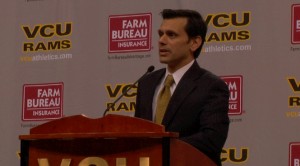 After months of rumors and speculation, the Atlantic 10 has officially added yet another hoops power, this time the VCU Rams from the Colonial Athletic Association.

The school called a press conference today to make the announcement. There, VCU President, Dr. Michael Rao, informed the crowd that the move would take effect July 1, meaning VCU will compete in all A10 sports next fall, including one year with outgoing members Temple and Charlotte.

By leaving the CAA, VCU will forfeit as much as $5 million in NCAA tournament shares owed, a loss President Michael Rao was willing to swallow, going on to say, “the expected returns are far greater than the short-term losses”.

Rao also commented on the Universities desire to be “premier across the board…and that includes athletics”.

Coach Smart wasn’t on hand to comment, but in an emailed statement said, “We are extremely excited by the opportunity to join the Atlantic 10 Conference. It is a phenomenal league, made up of programs with both rich traditions and recent track records of success. We are very appreciative of the time we spent in the CAA, the experiences we had and the relationships we gained. We plan to maintain our key rivalries with CAA teams, now and in the future. We are enthuasiastic about attacking the challenges that lie ahead. Our number one goal remains to move our student-athletes forward, both on and off the court.”

Mat Shelton-Eide
Mat Shelton-Eide has been involved in college athletics since 2007, starting as a co-founder of VCURamNation.com where he covered the Rams all the way...
Welcome to the A-10, Butler and
VCU