The countdown is on to a capital city showdown.  Let’s get right to it…

Richmond can absolutely fill it up on the offensive end this season.  Their 1.15 points per possession is the highest offensive efficiency rating of the Chris Mooney era.  In the Atlantic 10, four different Spiders rank among the top eight in true shooting percentage – this group is deadly from the floor and more than adequate at getting to the line.

Junior ShawnDre’ Jones has been nothing short of spectacular in assuming the point guard role this season.  In addition to taking over the bulk of the ball handling duties, Jones continues to be a lethal marksman from outside, converting on 46.2% of shots from range, a rate good for second in the league.

Senior forward Terry Allen started to hit another level down the stretch in 2015, and now finds himself at the top of a short list of A-10 Player of the Year candidates.  Quite simply, he has been a machine, with zero indication that this level of play won’t continue.  Allen has now scored in double figures in 34 of his last 35 games.  Good luck with that.

Perhaps the most interesting matchup, however, will be with T.J. Cline.  The redshirt junior is much more than a stretch-type big with a slow-release set shot; he’s also their most potent playmaker.  In addition to being a better than average 3-point shooter, Cline can work on the low blocks with moves over either shoulder – a high-releasing push shot inside, is supplemented by a quick-hitting turn off the glass from over the outside shoulder.

But Cline inflicts the most critical damage through the role of distributor.  Not only does he lead the team with a 54.7 FG%, Cline is also the team’s best assist man, posting a 28.8 assist rate – the conference’s 5th best.

Choosing to send aid to hinder Cline’s work under the basket often backfires.  His vision and passing are so good that if the help defender isn’t meeting him on the catch, Cline can easily punish double team attempts.

More threatening still is T.J. Cline measuring up a defense from the elbows.  Operating from this spot, the Spiders are incredible at weaving trailing defenders through a thicket of screens and handoffs that eventually expose a defensive lapse.  Ball watchers get caught flat-footed and left on backdoor cuts…

Weak side cheaters get eaten for breakfast…

Watch the above clip again and take note of 6’6” La Salle defender Cleon Roberts guarding Cline.  He offers zero disturbance to either Cline’s field of view or would-be passing lanes – arms down at his sides.  When Saint Joseph’s visited Richmond earlier this season, Hawks coach Phil Martelli had his defenders using a “swim” type stroke (think of the Hawk flap) to at least cause some visual interference.  If you’re going to let a 6’9” player with tremendous vision and above-average passing skills simply stand on Pride Rock and survey his kingdom, you’ll be mercilessly picked apart.

This could be the game VCU misses ace defender Jordan Burgess (finger) the most.  Maybe more than in any of the recent matchups between the two teams, this version of the Richmond offense will challenge VCU to be sharp and disciplined on every single defensive possession.  Any let up in communication, any dropped assignment, will spell trouble to the tune of open 3-pointers and easy layups.  The Spiders are not a squad to engage in a scoring bout.

The best approach to stalling Richmond’s T.J. Cline may just be to limit his minutes through foul trouble, by increasing his workload on the defensive end.  As the non-conference calendar gave way to league play, I wrote about some of the changes in shot selection Will Wade has orchestrated at VCU this season.  With a refreshing approach to front court personnel usage, the Rams have been setting up camp in the painted area all season. 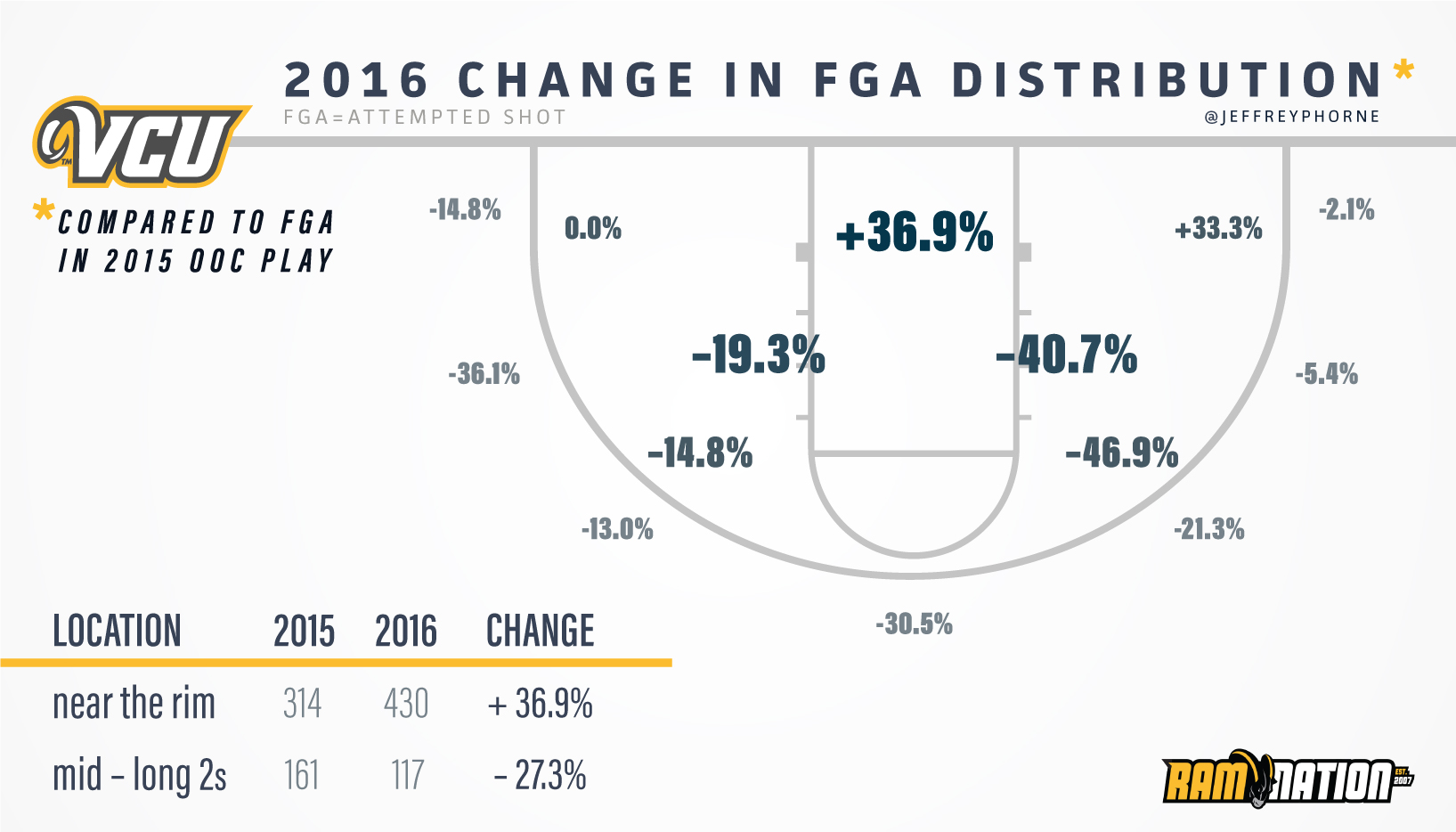 No team in the Atlantic 10 has more of an appetite for shots at the rim than VCU.  Per hoop-math.com, at 43.6%, they lead the league in percentage of field goal attempts at that spot.  “The Formula” may be particularly problematic for Richmond who are statistically one of the worst teams in the country at defending the rim.  Spider opponents are finishing an alarming 68.6% (345 nationally) of shots right at the basket, and Richmond is blocking only 5.3% of such attempts (337 nationally).

It’s still unclear whether the Spiders will have the services of their choice defender, Deion Taylor (back issues), and so what remains is a dangerous matchup between a team hell-bent on getting looks around the cup versus a group struggling to offer much in the way of interior resistance.  If Taylor can’t go, his length and defending will be missed, and the Rams will be poised to exploit the lack of front court depth on the Richmond bench.

To make matters worse for Richmond, this contest comes at a time when VCU bigs seem to be in a groove – punctuated by Justin Tillman’s career-high 27 point performance against Fordham on Tuesday night.

If a barrage of looks inside becomes untenable for Richmond, the Rams could be in for a field day as things could really start to open up for the wings – in particular deadeye sniper Melvin Johnson, who is on his way to becoming the all-time 3-point shooter in VCU history. 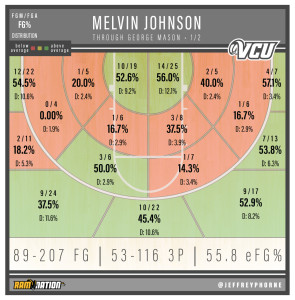 EVERYONE IS A WINNER

Richmond’s chances are improved if they can jump to an early lead through continued hot shooting.  If Cline can stay on the floor with Allen and Jones, the Spiders are capable of getting buckets in droves.  I like Mooney’s bunch in a shootout.

For VCU, expect to see more of the Wade formula.  If the Rams can punish the Richmond bigs and force foul trouble, the lack of depth for Richmond becomes difficult to hide.  VCU could run away with this one if they lay claim to the painted area.

In a good old-fashioned rivalry these little statistical nuggets are often destined for irrelevancy.  Marshall Wood may once again score 357 points in the first half.  Ahmed Hamdy-Mohammed may go 19-22 from the floor.  When the tip goes up in these games, it’s anyone’s guess.

If we’re lucky, a capuchin monkey, dressed in full The Hateful Eight duds, will storm Dick Tarrant Court on his trusty steed.  In that case, everyone goes home happy.