Non-conference play is officially underway! We compiled the top 50 most important Atlantic 10 non-conference games using Bart Torvik’s wins above bubble metric. The list includes at least two non-conference games per team and no more than four per team. Also note this only includes scheduled games, and not any MTE tournament games that may happen.

The first thing most Davidson fans noticed about the non-conference schedule: there’s no guaranteed matchups against any Power 6 teams. Fear not. There are still great opportunities in their schedule. For starters, Davidson will play in the Myrtle Beach Invitational in a field that includes Oklahoma. Looking past that, the game against San Francisco is sneaky good. Many believe the Dons have their best team in years; they rank second among five West Coast Conference teams in the top 70 of KenPom. A road win for the Wildcats is a potential Quad I opportunity that could improve with time.

Davidson will also finish their home-and-home with Loyola Chicago this season after beating them in 2019. Despite losing head coach Porter Moser and All-American Cameron Krutwig, Loyola Chicago is looking to remain as one of the best mid-major programs. A win against the Ramblers, who are coming off a Sweet Sixteen finish, is a nice resume-boosting opportunity.

The ‘Cats are also one of four A10 teams playing Northeastern. While beating the Huskies on the road could end up being a Quad II win, compared to the aforementioned games, this game seems more important to not lose than to win. And as for the matchup against Charlotte… the ‘Cats do not want to drop a game to the 49ers for a third year straight. It’ll be a matter of taking care of business in Charlotte.

Key non-con games include Miami (neutral site), Virginia Tech at home, and SMU and Ole Miss on the road. Out of these, the road game at SMU seems to be the toughest to me, as the Mustangs look to bring back a good chunk of their team from last season that just barely missed the NCAA tournament, but also the same team that won at UD Arena a season ago, albeit a completely different Flyers team.

Virginia Tech will be tough as well, seeing that the Hokies will be one of the better teams in the ACC this season out to prove themselves to the committee, but Dayton will get this game at home in a hostile environment on a Sunday afternoon. Miami is the first round opponent of Dayton’s holiday tourney in Orlando. The Canes are a crap shoot with a completely different team this year and will most likely be middle of the pack in the ACC this season. That will be Dayton’s first Power 6 opponent of the season, thus being their first big test.

Ole Miss being the toughest ranked game on this list is interesting since Ole Miss is not expected to be a top half team in the SEC this season, plus Dayton has a great history against the Rebels (Dayton is 7-0 all time vs Ole Miss, including 3-0 in Oxford). Only counting these four games and not the other two that Dayton will get in Orlando, I believe the Flyers will go at least 2-2 in these four games. Anything else would be a bit of a disappointment.

Up first is Fordham’s December 5th matchup against St. John’s. Coach Neptune has prioritized improving Fordham’s reputation as a marquee New York basketball program, and a win, or at least a tough game, against arguably the largest program in the city would be a huge step forward early on. The Red Storm should match up well against the new-look Rams, as both sides will look to play some high-tempo with plenty of interesting guard matchups, such as Posh Alexander on Antonio Daye. Most notably, Fordham fans will get to see how Fordham’s Chuba Ohams will match up in the frontcourt with former teammate Joel Soriano, who transferred to St. John’s this offseason. Later on in December, the Rams will head down to Brooklyn to take on Miami at the Barclays Center. While an ACC matchup will be an uphill battle for Fordham, just getting to play on such a large stage will allow the Rams to take a huge step forward in exposure and recruiting.

La Salle has some excellent games on this list that all A10 fans must watch. The first is the matchup between Villanova and La Salle. Yes, it’s a Big 5 matchup, and we will get to see two A10 teams play Villanova. However, what makes this game a little more special than the SJU vs. Nova matchup is two things. First, these two teams skipped their yearly appointment last year due to Covid impacting scheduling. The other, and more important fact, is that it is played at the Palestra this year. This is the way all Big 5 games should be played, the league should’ve brought the double headers back, but unfortunately there are some members who refuse to cooperate with that.

Anyway, I myself am trying to get tickets to this game just because of the location. Last year, I got in an argument with Rich from The Gola Standard after I said that La Salle should play every game at the Palestra as it was the only way older alumni would come to games. While this isn’t every La Salle game, getting this matchup at the Palestra is huge and La Salle and I could not approve more. This move deserves all the praise for fans of La Salle and the Big 5. What also makes this a great interest is that La Salle has played Villanova close over the past 10 years, unlike Saint Joe’s. The average point difference between these two teams over the last 10 years is 10.8 points, so they tend to be close games.

The other two games La Salle has on this list is Temple and Delaware. These games will be must-watches for not only La Salle fans, but A10 fans as a whole, because these are opportunities for Coach Howard to show that La Salle has progressed this offseason. Yes, the A10 is a competitive league. But, as Saint Joe’s vs. La Salle showed last year, when conference opponents play each other many times they tend to know each other’s weaknesses.

Non-conference games provide an opportunity for teams to really show how good they are by beating opponents they have less information on. Temple and Delaware are both winnable games for La Salle. These matchups will serve as a great window for A10 fans into the progress the Explorers have made this offseason, especially in regards to the development of Sherif Kenney, Jahmir Brickus, Jack Clark, and Clifton Moore. Many of the chatting class of A10 twitter have put La Salle in the top 10 of the A10, these two games could serve as an earlier indicator of La Salle meeting these expectations.

UMass’ non-conference slate opens up with 6 games within the first 13 days of the season including marquee games against Yale and Penn State. Each game after their opening night matchup against UMBC is a step up in competition which will be a great test to see how the Minutemen handle adversity early on in the season.

The team will travel to Saint Petersburg, Florida for the Jersey Mike’s Classic MTE. UMass will take on three quality mid-major opponents in Weber State, UNCG, and Ball State. The Minutemen must come out of there with at least a winning record on the season if they want to keep any postseason dreams alive.

Saturday home games against Harvard (12pm) and Rutgers (2pm) should be very well attended and generate tons of fan interest. Their most difficult opponent of the non-conference slate is Rutgers, who is coming off their first tourney appearance since 1991. The Scarlet Knights return an accomplished veteran team who is one of the tallest in the country with an average height of 78.6″ which ranks 17th in the nation according to Kenpom.

Head Coach Mark Schmidt has referred to this year’s non-conference schedule as the strongest he has ever had at Bona. The Bonnies begin the season playing two in-state rivals before trekking south to the Palmetto State for the Charleston Classic, which is the crown jewel of Bona’s non-conference schedule. On Thursday, Nov. 18, the Bonnies will take on a solid Boise State team to open up the tournament. Pending that result, the Brown and White will play either Clemson or Temple the following day. Schmidt’s hope is that his team goes 2-0 over the first few days and then play in the championship game against West Virginia. Go 3-0 in Charleston, and the Bonnies will certainly have everyone’s attention.

Two other big games against marquee opponents are just six days apart in mid-December. On Dec. 11, the Bonnies will play the UCONN Huskies in Newark, NJ. Connecticut Head Coach Dan Hurley knows the Atlantic 10 well and he will surely have his team ready to go against Schmidt and the Bonnies. After all, Hurley’s Huskies found themselves ranked #24 in the AP Preseason Poll, just one slot behind the Bonnies.

After playing their only game in the Tri-State area scheduled for this season, Bona will head to Charlotte on Dec. 17 to play Virginia Tech. The Hokies should go to the NCAA Tournament in 2022 and be competitive in the ACC. If the Bonnies can beat both the Huskies and the Hokies, they would really prove to everyone that they belong with the big dogs of college basketball.

Saint Joseph’s finds itself near the top of the list of ‘must watch’ non-conference games a second year in a row. As many remember, Saint Joe’s scheduled one of the hardest non-conference games in the season last year which included Auburn, Villanova, Tennessee, and Kansas. While this year is more reserved, there are still some challenging games on the docket. The first is Saint Joe’s at Villanova. This Big 5 matchup is Saint Joe’s most important game of the season. It is a rivalry that has determined the direction of this program for the last twenty years. Unfortunately, Saint Joe’s has not beat Villanova since 2011, and it would be a safe bet to think that it won’t happen again this year. This is especially true when one considers the fact that the average point differential between these two teams has been 20 points in favor of Villanova. While Saint Joe’s freshman Jordan Hall did have a breakout game against Villanova last year, scoring 17 points on 40% shooting, expect the ranked (#4) Villanova to handle the Hawks with ease, as has been the case over the last few years.

The next game for the Hawks on this list is the upcoming matchup with USC at the Wooden Legacy on Nov 25th. USC basketball went 25-8 last year and made it to the Elite 8 of the NCAA tournament. USC also received 30 votes for the preseason top 25 poll, however they did not earn enough to make it into the top 25. However, with the departure of forward Evan Mobley and Tahj Eaddy the Trojans may not be as formidable of an opponent as they were last year. If the Hawks can start the game off hot, as they did against Auburn and to some extent Kansas last year, this could be a game that Saint Joe steals. USC is the favorite, and should be by all accounts. However, USC isn’t as good as Villanova, and that fact alone makes this the most likely game in which Saint Joe’s can stage an upset. 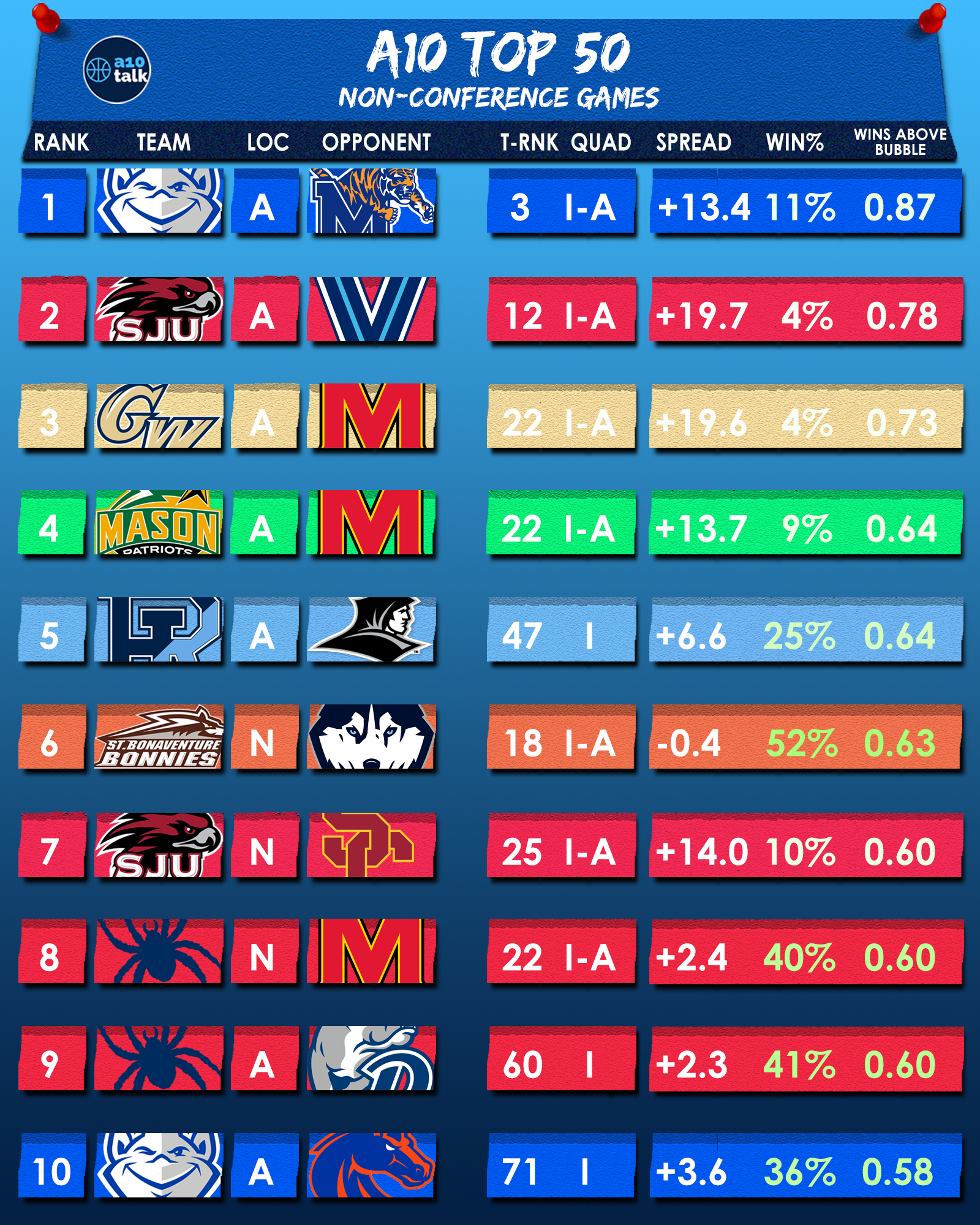 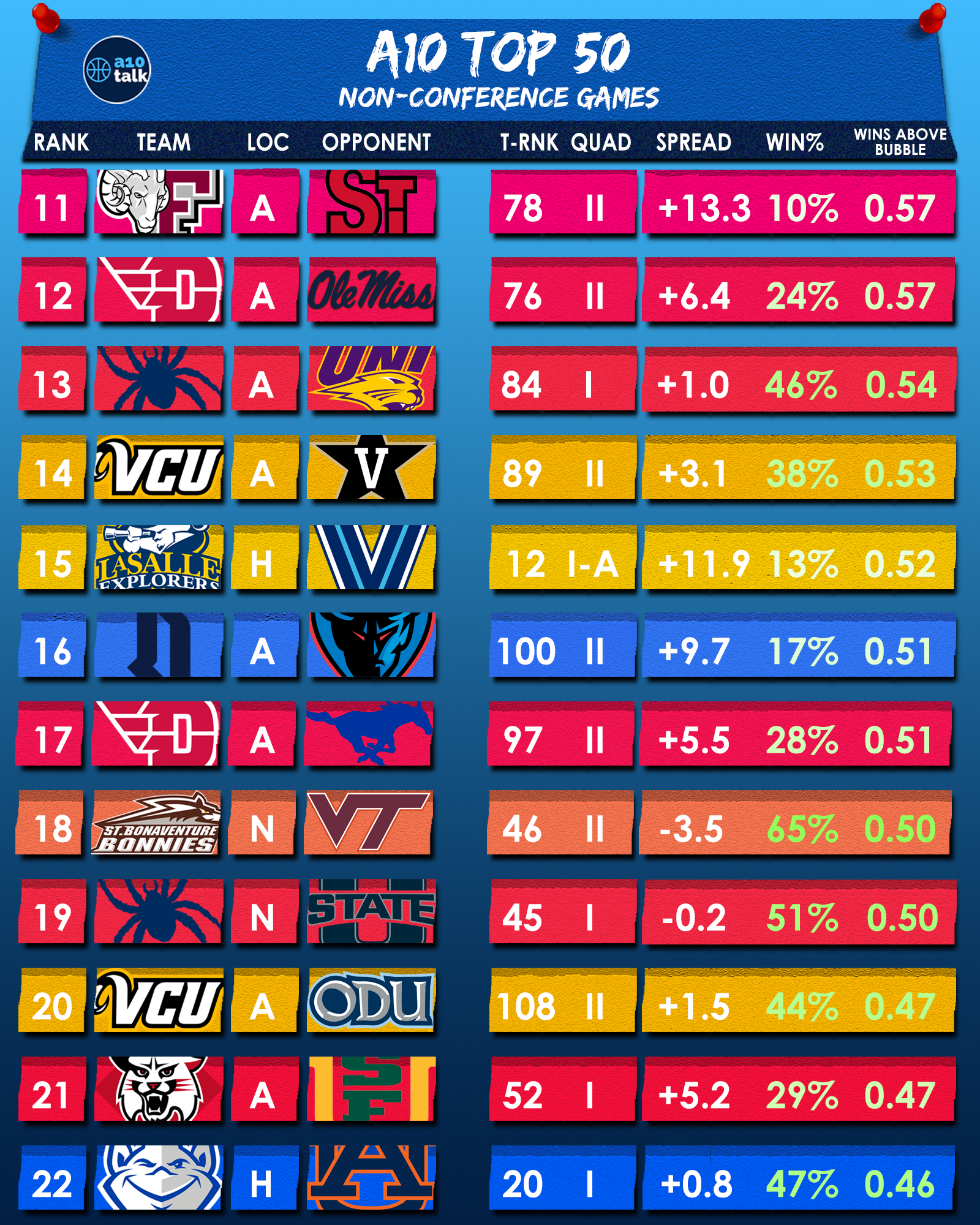 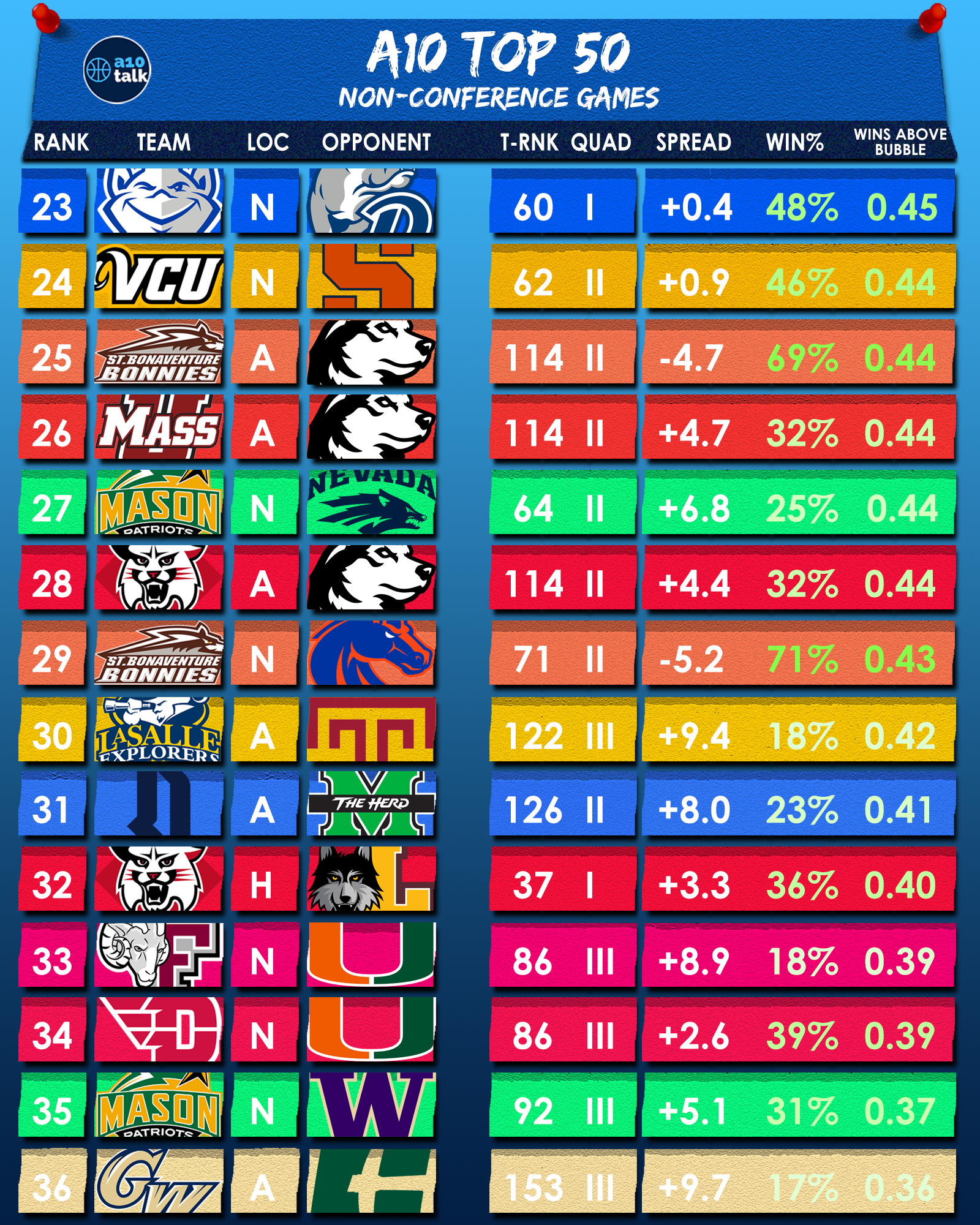 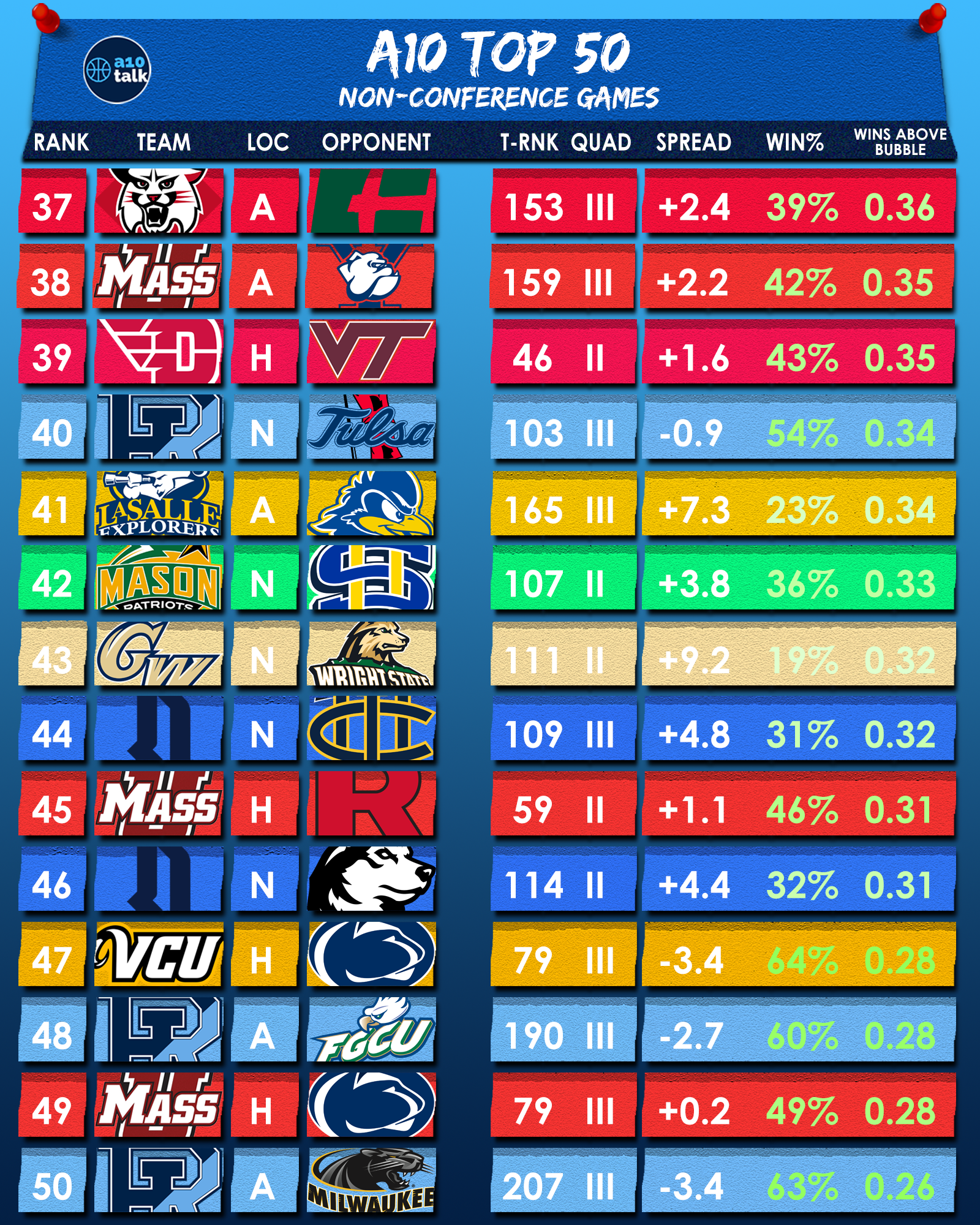