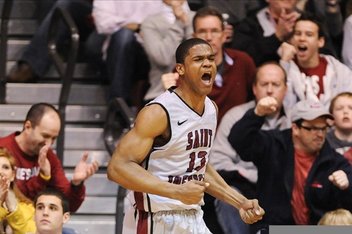 A so-so week for the Atlantic 10 represented by a “eh, whatever” 17-15 record. There were some good wins (St. Joseph’s over No.20 Notre Dame on a neutral court), but mostly very avoidable losses.

VCU kicked that list off with a home loss against an angry Wichita State team that they had knocked out of the NCAA tournament the previous season. The Rams shot an abysmal 34.7% from the field but ultimately killed themselves at the free throw stripe, hitting just 12-of-24 freebies in the two-point loss.

St. Louis followed that performance with a head-scratching 12-point home loss to a Santa Clara Bronco team that finished the previous season by losing their final 18 games. Needless to say, the Jim Crews era hasn’t gotten off to the start Billiken fans would have preferred.

Three days later the returning A-10 champs, St. Bonaventure, suffered an embarrassing close lose to a Canisius squad hot of a 5-25 season. Bonnies fans who wanted to believe their team was better than the No.11 preseason A-10 ranking might have to wonder if their worse after letdowns like that.

Atlantic 10 fans hoped to end the week on a positive note, but instead got a dose of horrendous Sunday hoops. Richmond, UMass and Rhody battled BCS foes but ultimately lost, Rhode Island in a most painful fashion, snatching defeat from the hands of victory by being outscored 19-5 in the final 10:38 of their five-point loss, their fourth of the season.

But easily the worst loss of the day belongs to La Salle, who after a solid season-opening win against Delaware dropped a home game to Central Connecticut State. The NEC opponent is yet another school coming off a losing season that was able to surprise an Atlantic 10 team during this rough week of A-10 hoops.

That said, still a winning record with some Ws over BCS schools. You subtract those Rhode Island and Fordham Ls (which are becoming a given) and the record looks even better.

THAT said, teams who put up goose eggs in non-conference play are the same squads that will tank conference RPI come January. So for the good of the league, A-10 fans will hope Pecora, Hurley and the bottom of the league get it together sooner rather than later.

A quick look at this week’s action:

Mat Shelton-Eide
Mat Shelton-Eide has been involved in college athletics since 2007, starting as a co-founder of VCURamNation.com where he covered the Rams all the way...
good article but PROOFREAD for TYPOS!