Let’s be frank for a moment: the A-10 Tournament is a mess. A beautiful, sprawling, thoroughly unpredictable, and chaotic mess that we all love anyway. It’s quintessentially American when you think about it.

In case you haven’t been paying attention, the #1 seed more or less never wins this thing. It’s everything we love about March unless you happen to be the prohibitive favorite. In the past 15 years, the #1 ranked overall team has won the tournament only twice (SLU in 2013 and Temple in 2010). In fact, the #1 overall team has even made it to the championship game only four times in that span. The average seed of the champion has been 3.7. This is where regular champions go to die.

But there’s a lot to unpack in those seed lines. Xavier won the 2006 edition as the 10 seed despite statistically being the third-best team in conference. What we’d like to know is if there is a particular statistical profile or through-line that typifies the champions through the years. Below is a listing of recent champions and their respective offensive and defensive efficiency rankings in the seasons they were crowned tournament champs. 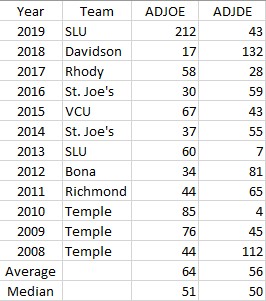 So that’s a little all over the place. You have a few very unbalanced teams such as 2019 SLU and 2018 Davidson (well, every year for Davidson) that skew things a bit, but the general trend is balanced teams. On average, teams tend to have offenses and defenses in the top 20% nationwide. Informative, but not altogether surprising. Teams that do it both ways tend to do well in one-and-done situations in the case that the offense or defense fails them on any one day.

But what about style of play? Anything there? Let’s layer in tempo rankings. 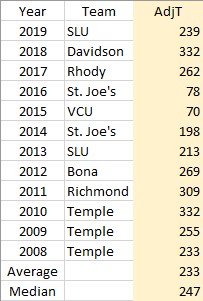 Oh. Oh my. That is slower than dial-up internet. Even an elite offense like 2018 Davidson played at a pace that scraped the bottom of the well compared to the rest of the country. That is boring and I find it viscerally offensive but it is what it is. You don’t win championships based on my aesthetic tastes even if I think you should.

So what does our limited analysis tell us about 2020? Well we’re looking for a fairly balanced team that plays at a butt-slow pace. That sounds like… Dayton. 3rd in offense, 30th in defense, 219th in pace. Check, check, check. But that’s not interesting. You didn’t come this far to be told that *gasp* Dayton is good at basketball. We know they’re destroyers.

If we’re talking sleepers, what about Saint Louis? The Billikens are 97th offensively, 35th defensively, and 221st in pace. A little off the mark on offense but everyone is too top-heavy one or the other way to fit this slipper. Anyone that’s watched SLU this year knows they can beat anyone on any night. (Bless your beautiful soul, Jalen Crutcher.)

So there you go. If not Dayton, the Billikens are your 2020 tournament champions. You can thank me on Sunday when Coronavirus has canceled life as we know it and hypotheticals are all we have left.