It’s TBT week people.  Basketball is back.  No fans, but whatever, we can manage and deal with it.  The Red Scare TBT team is ready to roll with a loaded roster from last year’s team that returns a handful of guys and some familiar faces.  This year’s team truly looks like a team that can win it all.  Unfortunately, there are 23 other teams that can win it all as well.  Remember, seeds don’t really matter in TBT.  All that matters is toughness, high basketball IQ, and experience.  This team has it, no doubt about it.

Let’s walk down through memory lane a bit to last year’s team.  It was their first year in the tournament, and they got a generous 3-seed in the Columbus Regional.  They powered through a team from Northwest Indiana called The Region (which is where I was born and raised ironically).  Then, they were most certainly down and out against Mid-American Unity until they were able to come back from eight points down and one point away from being Elam Ended, winning on a Devin Oliver walk-off dunk.  It was one of the biggest moments of the entire TBT, and D-Mo did not disappoint. 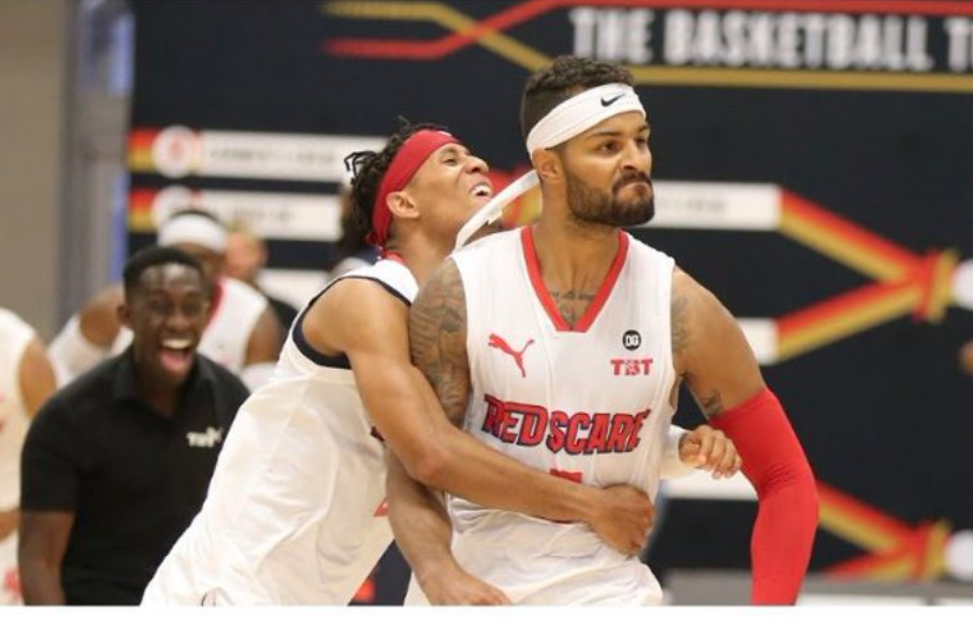 The boys made it to the Regional Final against Carmen’s Crew, the Ohio State alumni group with the infamous Aaron Craft.  Yes we all know the picture of him laying on the court in the 2014 loss to the Flyers in the NCAA Tournament.  Well, history would not repeat because Carmen’s Crew just wore out The Red Scare in the second half, which ended the Flyer Alumni’s run in TBT 2019. Carmen’s Crew would go on to win the whole dang thing in Chicago a few weeks later, which is why that loss feels worse in the end.  It was proof that the team had all the tools to compete and go far, but they had a few things they needed to tune up for next year’s team, one of those things clearly being depth.  The 2019 team ended up having a short bench of about 2 guys, which was hard on the team during the third game.  The GM duo of Joey Gruden and Jeremiah Bonsu seemed to have worked on that a lot this offseason, even if that meant stepping out of the Flyer Alumni group a bit. 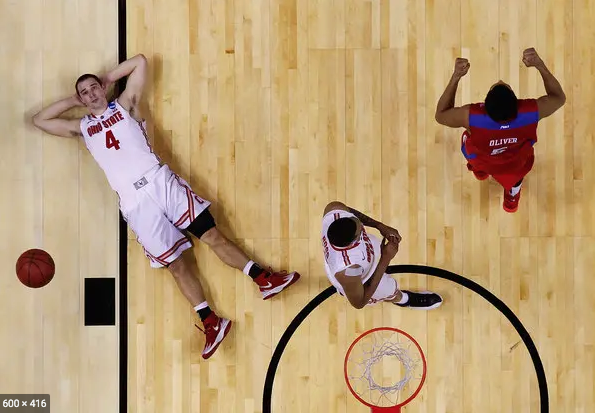 Ok, I got the photo in.  Still iconic to this day.

KD played on last year’s TBT team and started at point guard.  Davis was known for his defensive prowess back in his time at Dayton.  He was a freshman on Dayton’s 2014 Elite Eight team, where he did see a lot of playing time guarding many opponent’s best guards.  He was also known for shutting down Kris Dunn, who was Providence’s best player and an NBA draft pick in Dayton’s 2015 NCAA Tournament team.  KD has been playing professionally overseas since graduation, most recently at Club Comunicaciones in Argentina.  He was never the primary point guard at Dayton due to Scoochie Smith, but he should be on The Red Scare.

Looking to be the other point guard alongside Davis, Rob Lowery is a fan favorite before my time at UD.  I’ll be honest; I had to look up some highlights from his time at Dayton.  Lowery has got some handles, folks. He is also much more experienced that anyone else on the team and has been playing overseas since he graduated from UD in 2010. To me, this is a very underrated pick-up for the team.  He should make a huge contribution to the team this TBT.

Darrell “Baby D” Davis is back for is second year on the Red Scare.  He graduated in 2018 in Coach Grant’s first year.  That would be the only year he started for the Flyers, but he really developed into a true scorer and shooter in his senior year at Dayton.  Darrell has played overseas since graduation, most recently in Kosovo.  Davis is going to be this team’s main three point threat.

The face of the Red Scare and one of the biggest fan favorites over the past decade, Devin Oliver is back for his second year with the Red Scare.  D-Mo has probably had the most successful professional career so far for anyone on the Red Scare team.  He’s wrapped up all the awards in the Slovenian League (2 Finals MVPs, 2 League Titles, 1 League MVP Award). The dude is still the dude, what else is new? If there was a list for who is the hungriest player in the TBT, Oliver tops the list. There’s a reason why his twitter handle is @The_Underdog5.

Just when you thought his playing days were done in a Flyer uniform, Trey Landers is back after graduating this past year on Dayton’s super team.  Landers is obviously in his first year on the Red Scare squad.  Everyone knows and loves Trey.  If you watched this past season, this dude is a great rebounder and just a bully around the rim.  The question for him is how he will match up to many of these guys that have been playing overseas for a while now.  The youth is still good to have for this team.

Chip is here along with his teammate Trey Landers.  Mikesell also wants another chance in a Flyers uniform.  Familiar faces are great for the younger Flyers fans tuning into this tournament.  Ryan brings the same things as Trey:  rebounding, scoring any way possible, and that golden stat of plus/minus.  The same question goes for Mikesell as to how he matches up with the pro players.  They might not all be from the NBA, but the other players in this league are TUFF.  For Trey and Ryan, this tournament will also be a great measuring stick for improvements before setting off into the pro leagues in Europe.

Everyone remembers Robinson from his few years at Dayton.  Although his Dayton playing career did not end well, Robinson is back to make peace with the Flyer faithful whether they want it or not.  Robinson will be a big boost down low for this team.  He is still in great playing shape and has had a few years of development in the pro leagues, most recently in Japan.  Jalen is officially dubbed the Comeback Kid in my book.

The other Ryan on the team, McMahon is not a Dayton alum, but an alum of Louisville.  McMahon just graduated this past season from Louisville where he played all four years in a Cardinals uniform.  You might be wondering how he got onto the Dayton alumni team.  Well, GM Joey Gruden has been a grad assistant at Louisville this past season, so there was undoubtedly a connection there.  McMahon is a three point shooter.  He shot 43.6% from three and 42.2% from two this past season at Louisville.  So yeah, Dayton fans, he’s going to be a huge help for this team that needs some true three point shooters other than Darrell Davis.

Needing more than just one big body down low other than Jalen, the Red Scare got that in Thompson.  This guy is just a massive dude at 7 feet tall and will be a big boost to the Flyer’s need for big men.  He played college ball for Virginia Tech and Ohio State from 2013-2017.  Since then, he has been playing overseas for a number of teams, most recently in Belgium.  At age 26, Thompson is in the prime of his playing days and is also an underrated addition to the Red Scare squad.

As of right now, we don’t know who the coach will be. Last year, it was Damon Goodwin, who was a Dayton player back in the good ol’ 80s.  Goodwin is currently the head coach at Capital University in Columbus.  He would certainly be welcomed back to coach the team this year, but it sounds like that would have already happened if that were the case.  We will update this as soon as we know more.

If you didn’t know, Dyshawn Pierre, Kendall Pollard, and Justin Tillman are no longer playing for the team due to personal and family reasons.  It is a bummer for the team and fans, but as we learned from this past season, some things are bigger than basketball.

As of right now, who knows what the starting lineup will be.  This is a really experienced team with really successful professional careers.  The only thing that is for sure is that Devin Oliver will be starting for this team.  If I had to make a guess, it’s going to be Kyle Davis, Darrell Davis, Ryan McMahon, Devin Oliver, Trevor Thompson.  Don’t hold me to that, though.  They will figure it out, even if it means pulling five names from a hat.

The Red Scare will kick off the tournament watching to see who they will play on July 8 at 2:00 PM on ESPN.  The boys will play the winner of #9 Big X and #24 D2.  This is a change to previously named #24 Jackson TN Underdawgs, who are now out of the tournament.  That game will be the first one played on July 4th at 3:00 PM on ESPN.