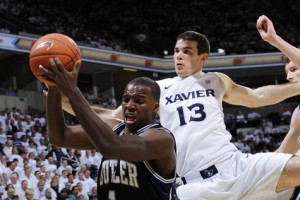 After reading ESPN’s 50 in 50 series and the Top 144, as determined by College Sports Madness, I started thinking about the A10’s rankings.  Since significant events are occurring on a fairly regular basis (Dez Wells’s expulsion and Rick Majerus’s leave of absence) and we’re barely into September, I’m not going to put forth my rankings of the A10 teams for the 2012-13 season quite yet.  However, there are other things to rank.

We’ve all heard of the rivalries between states.  In my neck of the woods, I constantly hear about Missouri versus Kansas.  I also often hear about Missouri versus Illinois.  Being from the Hoosier State, I grew up hearing the debates about Indiana versus Kentucky and Indiana versus Ohio.  Maybe it’s because people from Indiana are competitive by nature (a theory I support).  Maybe it’s because of an inferiority complex (which I doubt).  Or maybe it’s because I’m bored and there are still two months before college basketball season starts.  Any way I look at it, I’m curious as to which A10 state has had the best hoops over the past few years.

To figure this out, I looked the nine states that house an A10 team.  I’m including Washington, DC as a state, but I’m not including North Carolina because Charlotte’s leaving and they will soon be irrelevant.  For each D1 program in each state, I awarded a number of points for their final RPI rank for each of the past five seasons (2008-2012).  I added all of the points for each team in the state and averaged them to determine the state’s overall score.  Here’s the breakdown:

Using these points, here’s how they ended up:

However, RPI isn’t everything.  NCAA tournament success should also be factored in.  So, for NCAA tournament success, each team gets five points per appearance, 10 points for a sweet sixteen, 15 for an elite eight, 20 for a final four, 25 for a runner-up finish, and 30 for a championship.  I then averaged the points by dividing the total points by the number of D1 programs.  Here’s how they ended up:

So what does this mean?  Ohio teams have the best seasons overall, while Indiana has the best results at the end of the season, helped out quite a bit by the A10’s own Butler Bulldogs making back to back title games.  Interestingly, Indiana comes in second to Ohio in RPI even though Indiana is the only state that didn’t have a single team in the 300s in RPI in the last five years.  What’s more, in 2011 the Hoosier state’s worst team was ranked 191, and that was IU.  There’s definitely a reason for the state’s reputation for basketball prowess.

Not surprisingly, Pennsylvania comes in a very strong third place in both categories.  There are some great programs in PA, including Villanova, Temple, and Pittsburgh.  However, there are also some lousy programs (ahem…Saint Francis).

Things after the top three are not pretty.  Massachusetts can’t get more than one team in the tournament and can’t get them to the Sweet Sixteen.  Missouri has two teams that never had an RPI in the top 200.  New York has too many teams to be able to have a good year without having a few that royally screw things up.  Rhode Island didn’t have a single NCAA appearance.  Virginia has some strong programs, but they’ve also got plenty of bottom feeders (e.g., James Madison, Liberty, Longwood, VMI, William & Mary, etc.).  DC had a team (Howard) that had four straight seasons of being among the worst 46 teams in the country.

Obviously there are good and bad things about every state’s basketball programs.  Disagree with my rankings?  Feel free to comment.