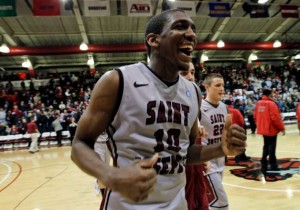 Coaches and media members cast their votes and the results are in… St. Joseph’s is your preseason No.1.

The league announced it’s poll and awards today in conjunction with it’s annual media day at the Barclays Center in Brooklyn, NY.

If the Hawks are going to finish as high as they are predicted, they’ll need big years out of their four preseason all-team picks. Langston Galloway and Carl Jones lead the way, both second team picks. Halil Kanacevic and C.J. Aiken check in as third team selections with Aiken an all-defensive team representative.

Last year’s tournament champ St. Bonaventure saw one of the biggest drops with the loss of 1st rounder Andrew Nicholson to the NBA. The Bonnies entered last season’s A-10 tourny as the 4th seed but enter this season a predicted 11th.