Making more threes than your opponents is important.  How important? Davidson won the A10 last year doing just that.

The Bob McKillop offense has always emphasized the three pointer.  When it is working, his motion offense is often mesmerizing to watch.  For over 20 years teams have entered Belk Area and left in defeat after giving up a slew of open threes and easy cuts to the basket.  Last season McKillop and the Wildcats displayed this offense in their first year in the Atlantic 10, and it worked like a charm.  Blessed with four elite three point shooters in the starting lineup (Brian Sullivan, Peyton Aldridge, Tyler Kalinoski, and Jack Gibbs), Davidson took the A10 by storm en route to a 14-4 conference record and an at-large bid into the NCAA Tournament.

This season, however, things have not gone the same.  The Wildcats are already 2-2 in conference play, have battled injuries all year, and are just not operating their offense on as efficient of a level.  Both their offensive and defensive efficiency has dropped off, and much of this can be attributed to the three ball.  Davidson has seen a slight regression to practically the national average in three point percentage – this season they rank 153rd out of 351 teams.

That was not the case the previous two seasons – both years where they won the regular season championship outright.  Granted, the 2013-14 season was when Davidson was still in the Southern Conference, but the three point line is still the same distance away – just as it is still an integral component of Bob McKillop’s offense.  This 3 to 4 percent drop in three point percentage amounts to a huge difference on a national scope: the 38.7% mark was good for 25th in the country – over 125 spots higher than the Wildcats sit right now.

Now, on the defensive end, the three point line has almost been equally important to Davidson.  In their efforts to outscore and just bomb opponents into submission, defending the three becomes very crucial.  Forcing opponents into tough and contested shots will eventually cause them to take fewer (and make fewer) three pointers.  Last year, Davidson was elite nationally in three point defense, ranking 10th overall in the nation.  This year, the same can’t quite be said: 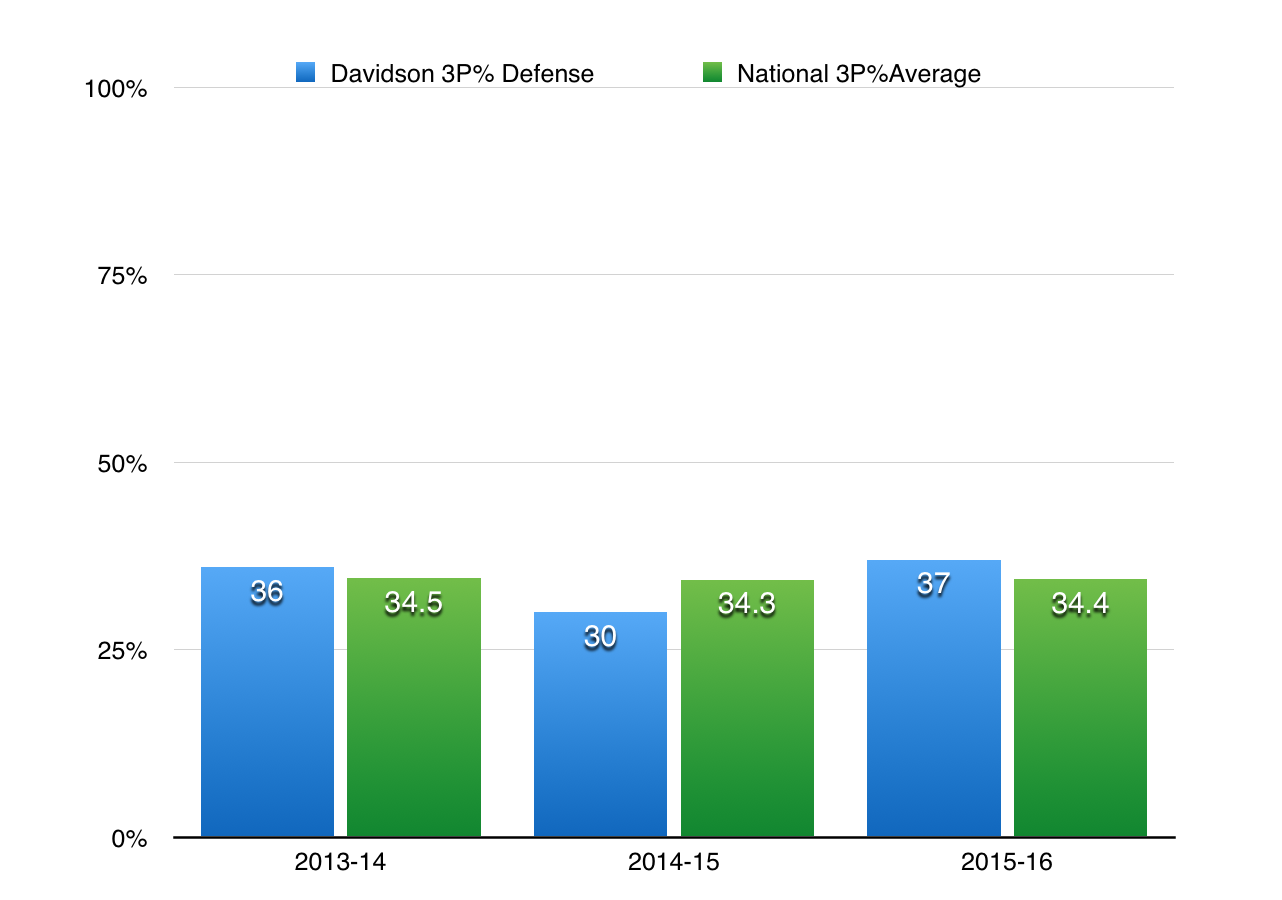 Davidson is doing just slightly worse than they were in the 2013-14 season, but the difference between this year and last year is incredible.  The Wildcats made on average 8.7% more three pointers than teams did against them.  That is the recipe for success, and a conference title.  Compared to this year, opponents have made 2.4% more three pointers than them.  That is an 11.1% swing, which is one of the largest drops nationally between this year and last.

The good news for the Wildcats is that the season is not over, and that they are still in the thick of things for a run at a second consecutive conference title.  Remember last season, when the Wildcats had a 5-4 conference record before winning 9 straight games.  However, for the Wildcats to make a run of those proportions this season, they will need to shore up their three point defense, and start hitting more often from downtown.

Spencer Papciak
Spencer Papciak is a junior History Major at Davidson College where he also plays on the golf team. You can follow him on twitter @spencerpaps, or se...