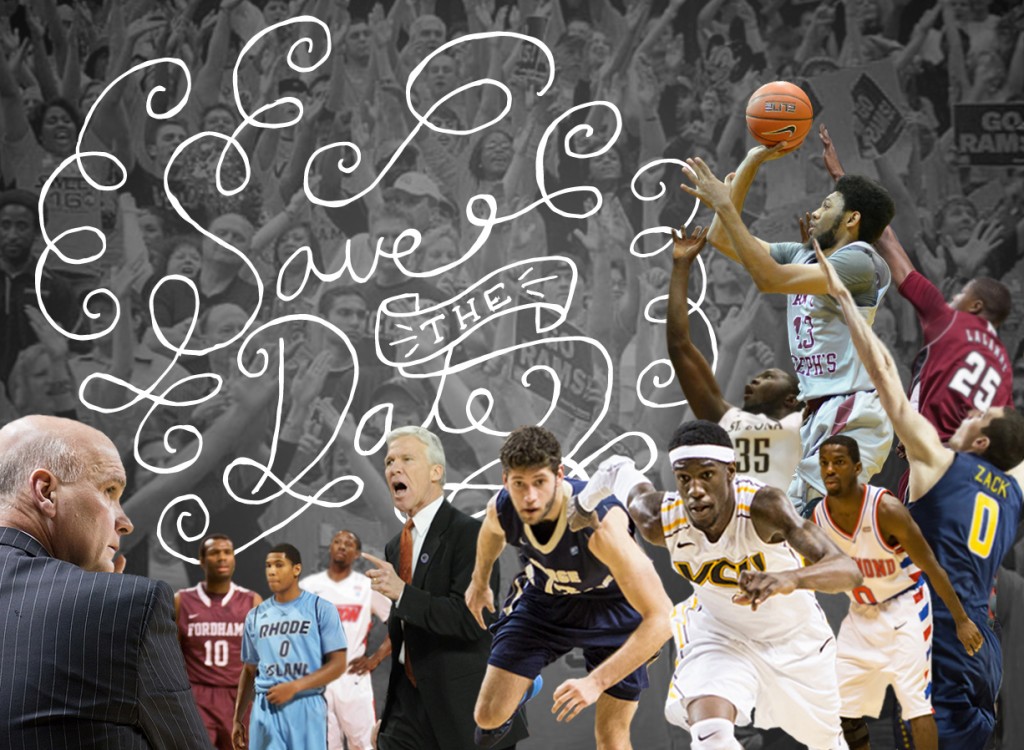 Excited about real basketball this week but still jonesing for some A10 play?

As a newly betrothed man, the 2015 calendar is of particular importance and, as such, I’ve been asked to be mindful of planned events and relevant dates. It’s also been suggested that I oughtn’t screw this up. Make sure there are no scheduling conflicts, be at the right place at the right time, and let friends know what dates to save so that they may be present to share in the celebration.

Frenzy and frustration have surely been sown.

But in light of all the planning, scheduling, and quality time spent with the 2015 calendar, I’d like to share one significant takeaway.

There is going to be one helluva week on the Atlantic Ten conference schedule this year.

Basketball fans, save the date, or dates as it were, for Tuesday, January 27 through Sunday, February 1—what will almost certainly be six incredible days of A10 basketball and storylines.

Any old hoop-head can get revved up for opening weekend of conference play – it’s Happy New Year, after all. And inevitably there will be excitement surrounding the closing week of league play as teams jockey for tournament seeding and others look to avoid relegation basement dwelling. But it takes a special kind of nerd—indeed one who plans his social life around basketball, nay, his social life is basketball—to get wound up about an otherwise random week at the end of January.

Here is just a glimpse of what I’ve put down on my calendar for the week.

Who is the Big Mahoff? Although it isn’t the Big 5, Philadelphia sets the stage for a derby week of sorts in the A10 as a potentially overlooked La Salle squad host Saint Joseph’s and preseason first-teamer, DeAndre’ Bembry. The teams have split the last ten contests, with the Explorers stealing the most recent meeting on the last game of an otherwise disappointing 2014 A10 campaign.

We will be treated to a handful of tasty top five-ish matchups this week and it doesn’t get much better than preseason number two, George Washington visiting preseason number one, VCU. The game should highlight two contrasting yet effective defensive styles, and will present the Colonials with their first chance at revenge after a 74-55 walloping in the A10 Tournament semis at the hands of the Rams.

I don’t care what you think of the network, when ESPN is in the house it is a big damn deal. On Thursday the “U” sector of the Mothership will land in Amherst to showcase Massachusetts hosting Dayton in another top fivey pairing. The preseason number three Flyers will bring an experienced group to take on the preseason number four Minutemen. Here’s hoping Cotton McKnight and Pepper Brooks will be on the call.

With the addition of Davidson to the conference, the weekend slate of games begins with a compelling matchup on the sidelines. The A10’s longest tenured coaches with their current teams, Phil Martelli (since 1995) and Bob McKillop (since 1989) have between them 44 seasons, 834 wins, 13 NCAA appearances, and just 2 teams. Beautiful.

It’s hard to say Rhode Island is a sneaky sleeper pick anymore. There is undeniable talent jamming in Kingston, and with a couple of promising freshmen being brought into the fold, the Rams are a must watch team. In what will likely be another bout between league heavyweights, Rhode Island plays host to George Washington who will be facing their second straight tough road test. These are two young yet experienced teams that should be in the mix for the foreseeable future.

Derby week concludes with the Black & Blue Classic in Richmond. The preseason number five Spiders of Richmond make the brief jaunt east to face VCU at the newly renovated Stuart C. Siegel Center. It’s a rivalry that has ebbed and flowed since the two first met in 1976, but one that is rarely without passion. This season promises to be a success for both teams, and that hope will add some entertaining fuel to a long-burning fire.

One other thing to keep an eye on if you’re a fan of good guard play-this week features a great test for Fordham’s, Jon Severe. On Wednesday Fordham takes on Rhode Island and the Rams from a different ma’am, and on Sunday they head to UD Arena to face Dayton. Severe will be matched up against E.C. Matthews and Scoochie Smith respectively in those contests, and the three sophomore point guards should not disappoint.

Let’s all enjoy the official start to the college basketball season this week, but be sure to make room on your calendar for this particular conference stretch. It’s a week loaded with intriguing matchups, crosstown rivalries, and one that will bring league play squarely to the midway point. It’s more than enough to get A10 enthusiasm percolating in early November.