Spiders look to spark a streak 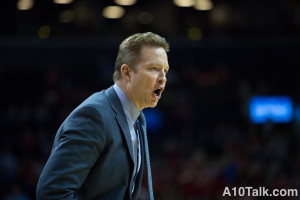 The Richmond Spiders are looking to start a winning streak to begin the 2019-2020 campaign.  The Vanderbilt Commodores (2-0) are currently standing in the Spiders way.  They are scheduled to tip off tonight at 7:00 (NBCSW & ESPN+) from the Robins Center in Richmond, VA.  The Spiders are coming off of a shaky victory against St. Francis (PA) last Friday night where they escaped 100-98 in OT.  Vanderbilt is coming into tonights contest 2-0 with victories against SE Missouri State (83-65) and Texas A&M Corpus Christi (71-66).  numberFire currently has Richmond (-6.5) with a 77.3% chance of winning per ESPN Basketball Power Index.

How both teams fare thus far

One thing that could potentially have a huge impact on tonight will be the health status of Spiders forward, Grant Golden.  Grant was shaken up vs St. Francis (PA) and had to leave action due to an ankle injury.  The team is thinking it isn’t too serious, but there is a good chance he may sit tomorrow night out to avoid a more severe injury.  Vanderbilt is coming into town shooting 49.6% from the field which is currently 41st in the nation, while the Spiders come in shooting 51.5% after 1 game which is 23rd nationally.  We know it is a small sample size, but just wanted to throw that out there.  The Spiders will be looking for a big game out of Nick Sherod, who was previously named A-10 Co-Player of the week after scoring 27 last Friday night.  If Grant Golden can’t go tomorrow night, the Spiders will need someone to come in and take care of the boards.  Richmond was out-rebounded 44-33 vs St. Francis (PA) with 15 of their allowed rebounds being offensive.

Tonight’s keys to the game will be the board battle as well as shooting from beyond the arc.  Richmond was 13-29 vs the Red Flash, where Vanderbilt is 22-56 through 2 games this season.  My prediction will be a Spiders victory with the score being 83-75.  Let us know what your predictions are as well!