Spiders take on the Cougars

How to watch:  NBC Sports Network

The Richmond Spiders are taking on the Charleston Cougars, in what will be a rubber match in their 5th all time meeting.  The Spiders last played Charleston in the 2009 CBI postseason tournament, which Richmond won 74-72.  Chris Mooney’s squad is coming off a victory against South Alabama this past Sunday, and are hungry to hit that 9-1 mark.

One of the main keys to a Richmond victory will be how hot they are from beyond the arc.  The Spiders are currently 42.1% from 3-point range, knocking down 96 on the year, which ranks them 4th nationally (as of 12/11).  Grant Golden has been a huge factor in the team’s overall success from deep.  He has done a fantastic job at the top of the key facilitating the offense.  He just seems to always have the eye for that extra pass that leads to a good look.  Now that he seems to be back to full strength, expect it to rain 3’s this afternoon from the Robins Center.

What to watch for:

The Cougars are led by senior guard, Grant Riller. Coming into today’s contest, he is leading the team in scoring (20.8 ppg) and minutes played (32.4).  Sam Miller will be having  a homecoming game, as he is from Arlington, VA.  He leads the Cougars with 6.5 rebounds per game and stands at 6’9 240 pounds.  He could be tough task for the Spiders defense down low, but with Golden healthy, it shouldn’t be too much of a major concern. 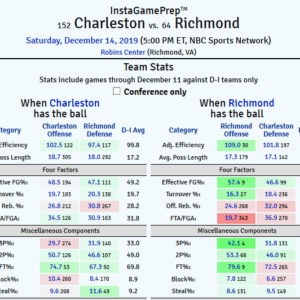 The Spiders will keep on with their winning ways, and will defeat the the College of Charleston.  Richmond will be led by their 3-point shooting as well as another big game for Grant Golden.  Let’s go with Richmond 76 – Charleston 65.  As always, be sure to follow along on Twitter at @AustinDaisey11 & @A10Talk, as well as on www.a10talk.com.