Rhode Island has a team that looks to contend for a conference title and  national recognition and a strong ranking next season.  The Rams have a ton of talent returning, some nice pieces entering their program, and a coach who has steadily guided the program from the depths of despair to the verge of national relevance.  I was bullish on Rhody entering last season and the Rams came tantalizingly close to exceeding my expectations.  A few bad losses early in the season and a schedule that wound up being less than stellar hurt the Rams when Selection Sunday rolled around.  This season the expectation for Rhody will be the Big Dance and nothing less.

If you have followed what we had to say about Hassan Martin last season, you know how much all of us here at a10talk love the big fella.  Last season I thought he was one of the more underrated forwards in all of college basketball and I’m looking forward to seeing him take another big step in 2015-16.  Martin is one of those players who plays bigger than his size, 6-7 and 235 pounds, and can impact a game in a variety of ways without having to touch the ball.  He has incredible timing and patience when it comes to blocking shots, hence his 3.1 blocks per game.  It should also be noted that Martin is a strong second half player and a momentum creator for his teammates.  His performances in the second half against Saint Louis and Richmond, both on the road, were difference makers for his team and helped lead them to crucial road victories.  A tenacious rebounder with great timing, Martin will be a force for the Rams once again this season.  And let us never forget about this:

E.C. Mathews is another great player who will likely fly a little below the radar coming into this season after an inconsistent 2014-15.  Mathews played a majority of last year while dealing with plantar fasciitis.  His assist to turnover ratio was a less than stellar 0.5 and his shooting numbers were relatively similar to his freshman year.  So what!  Doing any physical activity with plantar fasciitis is BRUTAL, let alone trying to play Division 1 College Basketball at a high level.  Mathews is a flat out baller and one of the best players in the A10 easy.  If he is healthy, the lefty from Detroit is capable of dominating stretches of games with his scoring and savvy court presence.

With Mathews battling a tough injury, the door was open for Jarvis Garrett to step into the spotlight a little earlier than expected.  A rising sophomore, Garrett made significant progress as the season wore on and by the end of the year was competing at a very high level.  I love his quickness and ability to get into the holes of man and zone defenses.  I was impressed with Garrett’s performance against Dayton in the A10 Tournament Semi-Final game when he matched-up against Scoochie Smith.  Garrett didn’t have a great “numbers” game but it was his calmness and stability in an absolute slugfest which really resonated with me.  I might be wrong on this but I could see him becoming an old-school type of floor general who is more and more valuable to his team as the season progresses.

Regardless of his bicep size and alleged age, Terrell finished last season looking like a nice piece for Rhody to build with for the future.  Some people might look at Terrell’s 37% shooting from last season and think that he isn’t a quality shooter but I think that number had more to do with shot selection than shooting ability.  There were games last season where Terrell just looked like a freshman who was figuring things out and then he would have moments were he looked like a man amongst boys.  I will be interested to see if Rhody tries to get him touches on the block in a mismatch post situation because I don’t see many guards in the conference let alone college basketball that will be able to deal with his strength.  I also love Terrell in transition and of course his on the ball defending.  This guy looks the part and I am looking forward to seeing him play it even better this season.

The Rams have added transfers Four McGlynn and Kuran Iverson (now immediately eligible) which only adds to its already strong roster.  McGlynn is a pure shooter with great range.  Iverson is a freakish athlete and all-around quality player who has been an enigma up to this point due to off the court issues and personality clashes with coaches.  If his head is right and he is focused, he becomes an immediate top level player in the conference.  There just aren’t that many 6-8 guys who have the handle and passing ability of a guard with the rebounding and shot blocking ability of a big.  Throw in an ability to shoot from distance and score off the bounce and you have yourself a match-up nightmare.

Andre Berry was a big fat kid who played basketball.  Now he is a big kid who has gotten himself into much better shape and could be an absolute steal for Danny Hurley’s team.  I saw where Berry was listed at 6-8 and 250 lbs. last season buuuuuuuut I think that weight may have been just a bit off.  Here is a picture of Berry during a game last season.  You be the judge. 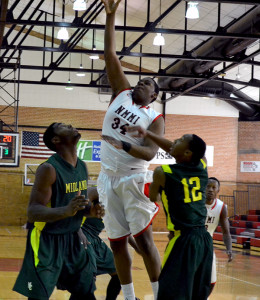 My guy is probably a biscuit away from 275 in that shot.  The reason I even bring this stuff up is because the kid is really talented.  As I watched some of his highlights and later a game tape, I came away thinking that he has nice hands and better than average feet for a kid his size.  He could be an instant factor in the post if he can stay healthy and continue to work on his conditioning.

Freshman Nikola Akele is an athletic forward who can be brought along as he develops a better understanding of how to play in a strong Division 1 conference.  Leroy Butts is a 6-7 lefty with a nice shot, especially for a left-handed player, and nice quickness and bounce to his game.  Definitely not a banger in the block, Butts will need to rely on his skill and hustle to carve out some playing time this season.  Shooting Guard Christion Thompson will also have to work incredibly hard to gain significant playing time in what looks to be an already crowded backcourt but a lot can happen between now and November.

The Rams are coming in 2015-16.  The upward trajectory of the program is impossible to ignore.  Danny Hurley is as competitive of a human being as I have ever seen and it shows in his coaching.  Even though his teams have been undermanned for a majority of his tenure at Rhode Island, they have always competed and maximized their talents.  If, and we are talking about a huge IF here, the officials call games tighter this season and adhere to the “freedom of movement” changes made by the Rules Committee, the Rams might have some difficult games and a period of adjustment.  Also, Hurley might actually rip a ref’s head off of his shoulders during a game if the foul calls get out of control.  But I digress.  The bottom line in college basketball is that if your team has talent you can compete.  If your team has solid coaching, your team will compete.  If your team has both, you are going to win a lot of game.  Rhode Island has both.  We might as well start calling them the Jeffersons because these guys are going to be: 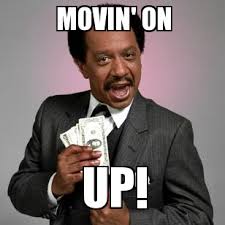