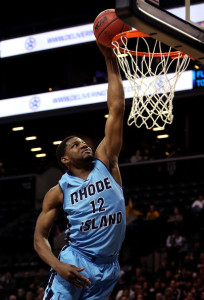 On Wednesday night, the Rhode Island Rams will play in their most important game of this decade. URI travels all the way across the state, a full 30 miles north, to put its 5-2 record on the line at in-state rival Providence.

With just four non-conference games left, the Providence game is the Rams’ last opportunity to add anything of substance to its resume before A-10 play. If Rhody can beat a formidable 6-2 Providence team, they very well could head into their conference games at 9-2. After Providence, URI hosts Delaware State, Detroit, and Brown. Though the season is still young, a win over Providence should put Rhode Island into the conversation for their first NCAA tournament bid since 1999.

The Rams likely will not be favored on Wednesday at the Dunk (Dunkin Donuts Center), but are certainly capable of pulling off the upset, if upset is even the right word.

Providence holds a definite size advantage in the frontcourt. Tyler Harris (12.4 ppg) and Carson Desroisiers (7.8 ppg) are both taller than Rhode Island’s tallest man, Gilvydas Biruta. But if the Rams continue to shoot well and win the turnover battle, they can certainly end a 7-game losing streak against their Ocean State rivals. Last year, URI lost to the Big East Conference Tournament Champions by 1 point in a heartbreaking 50-49 loss in Kingston.

The Rams already have a solid win under their belts this year, a 66-62 overtime victory over Nebraska. At the Orlando Classic, the Rams narrowly lost to Georgia Tech and also suffered its other loss, 76-60 at the hands of then 11th-ranked Kansas. Not counting Nebraska, the Rams pounded its opponents by more than 27 points per game for its other 4 wins.

No matter the outcome against Providence, the Rhode Island program is heading in the right direction. Dan Hurley, now in his 3rd season as head coach, won 8 games in his first season, and 14 games in his second. Winning 20 games and keeping the theme of adding 6 wins per year is a definite possibility for this team.

URI has a great mix of veteran experience and young talent. Sophomore swingman E.C. Matthews scored 14.3 ppg as freshman and leads the Rams in scoring again so far this winter. Another sophomore, Hassan Martin, is second in scoring with 11.7 ppg and also leads the team in blocks with 9 in just 7 games. Freshman guard Jared Terrell has been brilliant for the Rams, pouring in 10.7 ppg so far.

But for Biruta and senior point guard T.J. Buchanan, Wednesday night is their last opportunity at taking down Providence, and a very good opportunity to add to their potential tournament resume. It is the kind of night Rhode Islanders envisioned when it boldly hired Dan Hurley – and also the kind of night not seen since the late 90s.

Sam Taylor
Sam Taylor graduated from the University of Massachusetts in 2014, but his love for Minuteman Basketball dates back to his birth in 1992. Sam has rece...