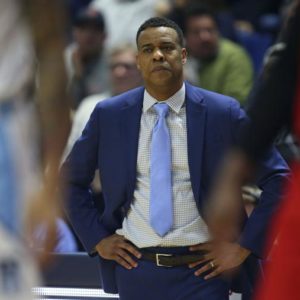 It was a chilly Sunday afternoon, January 5, 2020, and the University of Rhode Island men’s basketball team was in free fall. The Rams had just fallen to 8-5 after successive defeats to Brown and Richmond. Now, despite playing a brutal non-conference schedule and doing almost as well as possible – take out the Brown game, and it would have been almost perfect – URI had virtually no hopes of an NCAA at-large bid. The Rams were practically dead in the water and facing tough games against Davidson and VCU that week.

It was the following Saturday afternoon, January 11, 2020, and the University of Rhode Island men’s basketball team wasn’t dead anymore. The Kingston Rams knocked off Davidson at home and the Richmond Rams – then a team appearing in almost every bracketologist’s field – in the Siegel Center. The Brown loss still stung, but there was hope.

It was Friday night, several weeks later, January 31, 2020, and the University of Rhode Island men’s basketball team looked dominant. They boat-raced VCU in a Ryan Center rematch, cruising to a 29-point first-half advantage but winning by only 12. There was no doubt then that URI was the second team in the A-10 and would be playing in the Tournament come March.

It was Tuesday night, February 11, 2020, and the University of Rhode Island men’s basketball team, now#27 in the AP Top 25, was humiliated. Four minutes into their much-anticipated showdown with the #6 Dayton Flyers, they were down 17-0. The ten-game winning streak that they had carried into the UD Arena was going up in flames. That was fine, though – the Rams were still safely in the field and losing a game they could have had no reasonable expectations of winning.

It was Saturday afternoon, February 15, 2020, and the University of Rhode Island men’s basketball team was back in business. Fatts Russell scored 18 points, three other starters were in double digits, and the juggernaut was rolling along. Heading into its bye week, Rhody was right where it needed to be. Fans on the KeaneyBlue forum were almost hoping to lose a game, if beating Dayton were impossible, to avoid the dreaded 8/9 game.

It was the next Saturday night, February 22, 2020, and the University of Rhode Island men’s basketball team didn’t have to worry about playing the 1-seed in a second-round NCAA Tournament game. The Rams had just lost to Davidson at Belk – a perfectly respectable defeat, but one that would nudge URI closer to the tenth or eleventh lines. Frustratingly, it was a contest in which the Wildcats gave their visitors every opportunity to win – there were countless gifts not taken in the final minute of regulation and overtime. As the final buzzer sounded, Tyrese Martin chucked a half-court attempt that hit the back of the rim and bounced off, symbolic of just how close Rhode Island had been.

It was Wednesday night, February 26, 2020, and the University of Rhode Island men’s basketball team had one relieved fanbase. The Rams had taken the short trip to the Bronx and held a twelve-point lead in the Rose Hill Gymnasium with eight minutes and change to play but then took their foot off the gas and allowed the lead to dissipate. With six seconds to go, Fordham led by a point. URI was able to escape with the win after Jacob Toppin sunk two free throws and the New York Rams’ last possession was fruitless, but it was as ugly a victory as possible and a sign that the good times might not be rolling anymore.

It was Sunday evening, March 1, 2020, and the University of Rhode Island men’s basketball team knew that its at-large hopes now rested on defeating the now-third-ranked Dayton Flyers in three days’ time. Hours ago, URI had allowed the visiting Saint Louis Billikens to race out to an 11-0 lead and looked powerless to stop Hasahn French and his friends. The Rams made several runs but were answered every time, dropping to third in the conference, behind Richmond, on the head-to-head tiebreaker. Still, the stage was set for a special Senior Night and a signature win.

It is Thursday morning, March 5, 2020, and the University of Rhode Island men’s basketball team is right back where it was two months ago to this day: in free fall. The 84-57 defeat to a Dayton squad in line for an NCAA 1-seed was not quite as humiliating as the 78-48 pasting by Saint Joseph’s two Senior Nights ago, but it feels much more crushing. That 2017-18 team still made the Tournament and won a game there- still was ranked in the Top 25 the week after! – and lost the conference championship by a single point. This club, however, peaked at the wrong time and is now fully in the midst of a downward spiral. They’re not dead yet – the past two months show that that the Kingston Rams are more than capable of picking up the pieces and resuscitating a lost cause – but are pretty close to it. The UMass game, the regular-season finale, is virtually meaningless; Rhody will still in almost all scenarios somehow lock up a double-bye and have four days to retool before Brooklyn, and, win or lose, its at-large chances are zero. It’s going to take three wins in three days (this, based on the two Rhode Island-Dayton meetings, might well take an upset of the top seed) next weekend for URI to achieve what was at the beginning of the season a hope, on January 5 an impossible dream, in late January and much of February an expectation, and is now, once again, an impossible dream: a place in the field of 68.