It was about as exciting of a week as Atlantic 10 fans could have asked for in Brooklyn, NY. VCU capped off a week of great games by narrowly escaping second-seeded Dayton in the Rams fourth win in four days.

VCU was virtually written off after losing three of their final four games of the regular season, including a 27-point rout at Davidson, VCU’s worst loss under head coach Shaka Smart.

Apparently underdog status was what the black and gold needed, flying under the radar as the No.5 seed and beating the three teams that had handed them that losing streak along the way. VCU became the first team since Xavier in 2006 to win the tournament outside of the top-four. VCU’s path included wins over three of this year’s top-four teams, opening the tourney with a win over No.12 Fordham followed by wins over No.4 Richmond, No.1 Davidson and No.2 Dayton.

VCU provided three seed upsets in a tournament that had just four total.

Friday started with a bang with top-seeded Davidson averting disaster by clawing back from down 18 to stun La Salle at the Buzzer. Dr. John Giannini employed a great gameplan early, dominating the regular season champs with a heavy does of the Explorer’s twin towers. It looked like men versus boys as Steve Zack and Jarrell Wright combined for 43 points and 21 rebounds, but the Cats stuck with the three-ball until it started to fall and dropped into a 1-3-1 zone that locked up the La Salle offense late. A Jack Gibbs three trimmed the lead to one point, then on the ensuing possession, La Salle missed two attempts from deep that would have iced the game, only to see the league’s A-10 Player of the Year, Tyler Kalinoski, make them pay for missing those with a dagger layup as the buzzer sounded. Incredible.

Graham won the official A-10 honor but we’re giving him the award as well for confirmation after VCU’s steady senior averaged 17.3 points, 9.8 rebounds and two assists per contest over the four-game stretch that landed VCU their first-ever Atlantic 10 tournament title. 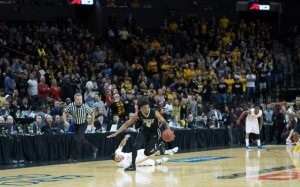 The guys with the big averages get all the shine, but often times it’s a role player that comes up with the big play that saves that superstar’s team late. VCU sophomore, Doug Brooks, was just that guy this week during VCU’s run. Kalinoski’s game-winner was certainly the best play of the tournament, but Brooks came through with two game-winners for the Rams that probably aren’t getting the shine they deserve. VCU trailed Richmond by a point late in their quarterfinal game against rival Richmond. That was of course until Brooks drained a three-pointer that gave the Rams a two-point lead. Richmond’s TJ Cline quickly tied up the game until Brooks found Mo Alie-Cox for an and-1 and a lead the Rams would never surrender. Two games later Brooks stripped Dayton’s Kyle Davis then found JeQuan Lewis to give VCU a late four-point lead that put VCU in position to ice the game at the free throw line.

The Explorers didn’t get the win, but it wasn’t for a lack of production out of Steve Zack. The senior big posted a 24-point, 15-rebound double-double against the regular season champ and added three assists in what was ALMOST the best upset of the tournament. It was Zack’s second double-double in as many games. He averaged 18 points, 14 rebounds and 2 assists in the final two A-10 tournament games.