What good is a story without a solid villain? The Atlantic 10 has had its fair share of “bad guys” over the years, or well, heroes to one team, villains to the rest of the league. Guys like the blue-haired Cody Ellis or the bird-flippin’ Halil Kanacevic. It’s these fine folks who give us the characters to make this entertaining hobby of ours all that more interesting.

Below is a list of the league’s most hated characters heading into the 2015-16 season.

Gibbs has become an A10talk.com favorite in the Wildcats’ first season of A-10 play based off his brilliant play and occasional liking of our Tweets (bonus points). But when you’re that good, have a smile that big and look like a leading man from an ABC Family show, everyone else is gonna hate you. Gibbs and his top conference offensive rating, a blistering 120.7, return for an A-10 encore with hopes of defending the Cats’ regular season Atlantic 10 title. Expect a lot of points and a lot of swag from our dude Jack. Wildcats fans will love it while everyone else can buckle up for two more seasons of pure annoyance.

Teams generally all seemed to respect Dayton’s players and #TrueTeam under Archie Miller. But one thing I found both non-Dayton fans and even some Flyer fans seemed to dislike was the sea of red sweater vests found at UD Arena. To quote one Dayton fan, “The first present I got from my wife after graduation was a sweater vest. At that point I felt like a real alumni.”

There’s not a ton to hate about Duquesne. They play out of a cool enough city, have a cast of pretty likable players and are generally good for an easy win or two (opposing teams like that). The only beef I’ve recently heard anyone has had with the Dukes, including from Duquesne fans, is in their scheduling strategy. The yearly release of the Dukes’ non-conference schedule reminds me of when I was a kid and had to go to the doctor’s office for a shot. You know it’s coming and you aren’t looking forward to it. The only difference between the shot and the Dukes’ schedule is the shot always turned out to be less painful than you thought it was going to be. That hasn’t been the case with Duquesne’s OOC slates. As tough as it is for the RPI’s of fellow A-10 schools, put yourself in the shoes of a Duquesne fan when the season tickets are mailed with a OOC home schedule featuring Bluefield State, NJIT, Howard, St. Francis (PA), UMass Lowell, UMES and Texas Pan-Am. Bummer.

There was a quote I read on a forum by a Dayton fan that goes by the name ChrisSFlyer that was so good that I have to use it as the only description of why Severe made this list.

That’s the sad fact here. The Paul Hewitt A-10 years resulted in just eight conference wins to 26 losses with no real standout players, none impactful enough to make you hate them at least. Shevon Thompson comes close as a double-double machine but you end up just feeling bad for the guy for ending up at George Mason. I promise you this though, as a VCU student during Mason’s prime, you A-10 fans better pray to God Paulsen doesn’t return the pride to the Patriot Center. Hell hath no fury like the Mason fans that will leave their section 50 yards from yours to come talk smack to you when their team is up double-digits late and it looks like they are going to win. Love em while you can, Atlantic 10.

I was actually surprised at how many people seem to dislike Yuta. Personally, I think those people are probably all just racists, but for the sake of this article, let’s assume they are not. The biggest beef people seem to have with Yuta was that he apparently constantly complains about calls and is a bit of a flopper — “the human flop machine”, as one person described him. I think those people are all just haters and mad that Yuta gets to appear in rad videos like this one:

Play on, Yuta…and you let them haters hate.

I’ve heard almost no complaints around the league about anyone or anything related to La Salle (now that DJ Peterson has graduated). With that, Jordan Price basically will inherit the honor because of the guard’s ability to drop a ton of points on opposing Atlantic 10 teams. Price had four games of 30 or more points last season, two within Atlantic 10 play including a 34-point night in a win at A-10 tourney winner, VCU. With the graduation of the likes of Jarrell Wright and Steve Zack, I can only imagine Price will be even more leaned upon next season, so I’ll take the over at four when it comes to 30-pointers during the 2015-16 season.

I like Derrick Kellogg, seems like a solid dude, someone you would love to get some drinks with on a night out with the bros. But on the court, combine the fire that made him a tough player for UMass with that slicked back hair and business suit and he looks and sounds like the A-10’s Gordon Gekko on the hardwood. Opposing fans love to hate guys like that. I’d still have a beer with him though.

Rhode Island’s Dan Hurley has wasted no time in turning around a Rams program that went just 7-24 in Jim Baron’s last season in Kingston. The son of coaching legend, Bob Hurley, Dan secured a top-four seed for the Rams in this year’s Atlantic 10 tournament after winning 13 conference games this season, an eight-win jump from his previous season in the Keaney blue. Ram fans love him but his serious sideline animation has made him one of the most hated coaches in the league by opposing teams’ fans. With a roster that returns a ton of young talent, URI appears to be a program that will stick around the top of the standings as long as Hurley continues the rebuild. 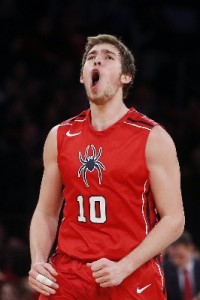 TJ Cline has wasted zero time in making himself known to opposing teams and their fans. A Niagara transfer and son of Hall of Famer, Nancy Lieberman Cline, TJ became the Spiders’ most efficient shooter (59.6% effective field goal percentage) in his first year of A-10 eligibility and has become one of the most versatile bigs in the league. His post-play celebrations however have more “woo” than Rick Flair (amaze yourself with a Google image search), which, combined with his ability to kill the opposition and his serious white-boy swag, make this Nature Boy one of the league’s most hated players. The bad news for the opposition? He’s got two more years of eligibility. WOOOOOOOOOOOOOO!!!!!

I’ll be real, I’m the only person who has any issue with the Bona wolf. I nominated him as enemy of all because his existence denies us of the short-lived Bona Fanatic. Truth is, outside of people complaining about the trip to Olean I haven’t heard many complaints about anyone having anything to do with St. Bonaventure. Maybe it’s their middle-of-the-road annual record, their lovable brown uniforms or the way Mark Schmidt fell off that scooter that one time, but no one seems to have a problem with the Bonnies until they lose to them on a buzzer-beater. So Bona Wolf, you are all there is left to hate. You replaced a furry brown mascot with a basketball muzzle, and for this, WE HATE YOUR GUTS!

One of the best traditions in college sports is quite possibly the most annoying tradition for every team that isn’t Saint Joseph’s. Regardless, you have to respect the physicality of this position, as Saint Joseph’s clearly does in offering up a scholarship to the ironman who takes on the role that requires them to flap this evil chicken’s wings throughout the entirety of each and every game. The fact however that this person not only does this at home games but flies through road arenas as well got them public enemy No.1 status from the fans we heard from. The A-10 can hate all they want but as they say, the Hawk will never die.

There weren’t a ton of responses (hardly any) when it came to the Billikens. I suspect a good bit of that had to do with the Bills bottom dweller status in this past season’s standings. In years past Cody Ellis would have been an easy pick, and as a still very vocal fan we probably could have used him. But the former blue-haired Aussie’s current geography leaves him too far out of the mix to qualify, so I’ll nominate one for the media: Jim Crews. I doubt I earn any interviews with the Billikens head coach for that nomination, but I can honestly say I’ve never met a more prickly coach in all my time covering college hoops (just eight seasons, but over two different conferences). Take a look at this interview following a home loss this past season to George Mason. Classic Crews. Eyes that scream, “come at me dawg!”, Crews seems to have that constantly annoyed look down to a science, but what would you expect from a guy who spent 13 years under Bob Knight? Big Jim is the guy you pray isn’t your girlfriend’s father. 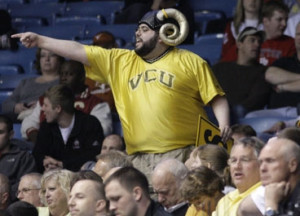 This response came back from a number of opposing teams fans (not to mention from a fair share of VCU fans) which I can tell you probably is considered quite the honor by Chris “Pav” Crowley, the only singled-out fan to make the list. VCU’s horn-wearing superfan is at nearly every VCU game, both home and on the road, and makes his booming voice heard whether opposing teams or fans like it or not. Pav is also not afraid to mix it up on Twitter, which probably doesn’t help make friends around the league. Still, how many individual fans of a college sports team are as recognizable as VCU’s most visible fan? That’s got to be an honor, whether the college hoops world hates him or not.