Earlier today, George Washington University announced that they will no longer use the Colonials moniker after this coming academic year.

After a thoughtful and deliberate process that engaged the university community for feedback, the George Washington University’s Board of Trustees has decided to discontinue the use of the Colonials moniker. (1/3) https://t.co/btA0pm6zxK

Regardless of where you stand on this decision, there are many potential new names that GW can choose. Here, I am going to power rank what my favorite options are.

Before we get into this, I will not be including Hippos. I have heard that GW will not consider it because student-athletes have expressed that they do not necessarily feel comfortable with the connotations associated with being called the Hippos.

Choosing Revolutionaries keeps the name consistent with having a theme directly related to George Washington. Washington was a Commander in the Continental Army which defeated the British in the American Revolutionary War. One of the issues with Colonials, beyond the connections to colonialism, was that it was four syllables and difficult to scream and chant during games. Revolutionaries is easily shortened to “Revs,” and does not have the same problem.

While I have ruled out Hippos for the time being, that doesn’t mean I don’t appreciate the legacy of the hippopotamus at GW. In 1996, former GW President Stephen Joel Tratchenberg bought a hippo statue, and then later gifted it to the class of 2000. Now, that statue is a fixture on campus, and it is a tradition for students to rub its head for good luck. River Horse does not sound as potentially derogatory, and would still be honoring the hippo’s legacy as GW’s “unofficial mascot.” 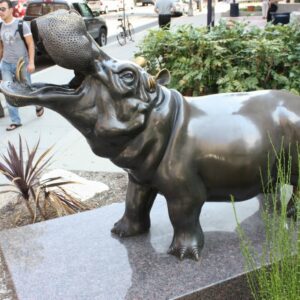 GW teams are already known as “The Buff and Blue,” and it is the focal point of GW’s fight song. Other schools, like Harvard (Crimson), Syracuse (Orange), and Stanford (Cardinal) all have colors as their mascot and nickname. Going by the Buff would honor this tradition and would probably be the smoothest transition. The only issue here is that Buff is a relatively obscure color, and not many people outside of GW know what it is.

Similar to Revolutionaries, Continentals pay homage to this country’s founding without romanticizing some of its more unsavory aspects. The only reason I like Revolutionaries more is because “Revs” sounds so much better then the potentially vulgar-sounding abbreviation of Continentals.

I haven’t seen anyone discuss this, but I think it could be cool to reference George Washington’s “voyage” across the Delaware River. Crossing the icy river to surprise the British forces is pretty badass, and would be a fitting inspiration for GW’s teams. Voyagers does not roll of the tongue quite as well as some of the other options, which is why it takes 5th place on my power rankings.