There’s so much twitter rumble out there right now about Luka Garza vs. Obi Toppin for the Player of the Year award.  I think we as fans of the A10 want to see Toppin win, but Garza is putting up an outstanding season as well.  Myles Powell is going to be in the conversation and most likely one of the finalists, but it seems that the talks for him have died down over the past couple of weeks.  The two names that remain talked about are Luka Garza and Obi Toppin.

I’m not going to sit here and pretend that I’m going to be as objective as possible because let’s be honest, no one is buying that.  I’m a Dayton fan, through and through.  I can remain objective on the A10; I’ve done it all season.  But for this prestigious award, there’s nothing I can do to persuade the reader that I’m going to be objective on my vote between Garza and Toppin.  Of course I would vote Obi Toppin if I had a vote.  He’s my guy.  However, I will definitely put my research in as to why I believe he is the Player of the Year because there is nothing worse in this country than an uninformed voter, even if you don’t actually get a vote.

For this article, I’m going to examine the arguments for both players, stating each players’ pros and cons as well as why it should go to my guy, Obi Toppin.  There are good cases for both guys to win, but Obi has my vote, which I will get to later.

Pros for Garza, Cons Against Toppin

Pros for Toppin, Cons Against Garza

Why Obi Toppin Should Win

Every voter is different and looks at multiple factors, but I like a combination of many different things such as stats, effect on team, and eye test.  Stats are concrete and indisputable.  While Garza puts up a lot of points, he is a volume shooter.  Obi takes much less shots but still is able to score 18-20 a game.  Essentially, when you give him the ball, often times than not he is going to score.  Even against subpar competition, shooting on average 70% per game is absurdly good.  Even in his last game against Davidson, for example, he scored 23 points total.  How he got those 23 points was by shooting 7-7 from two and 3-4 from three.  That is just crazy good efficiency, which is what we have seen from him all season long.

As for his effect on his team, Toppin has his team at #3 in the country, 27-2 overall, and 16-0 in the A10.  Regardless of what conference you are in, going undefeated is hard to do.  And the A10 is no cakewalk for anyone.  You really can’t say Iowa would run the table in the A10 as well considering the loss to Nebraska.  Odds are they would slip up in one game sometime during the season.  Along with his effect on his team, Toppin gets his teammates more involved and uses the attention of the defense to get his teammates the ball to make plays, hence the higher assist rate than Garza.

Finally, the eye test, which is super objective and biased, I get that, but Obi is so much more athletic that Garza.  The highlight reel dunks and athletic ability are just amazing to watch.  There isn’t another player in the country who can match the athleticism or bring as many different dynamics of play to the court as Obi Toppin.  Garza is not as flashy as Toppin, but he is still a great player.  I just feel more strongly for the more athletic and dynamic player to be the Player of the Year.

Who the Majority of Voters will actually vote for

One thing stands out between the two players, and that is exposure.  Luka Garza plays in the Big 10, which is much more easily watched on TV with Big 10 games being on ESPN, CBS, FOX, Fox Sports, and Big Ten Network.  Dayton’s games are mostly broadcasted on ESPN+, which viewers have to pay for.  Now Dayton has gotten lucky to be on ESPN for the Maui Invitational as well as ESPN 2 for the Davidson game and CBSSN for the SLU, VCU, and Rhode Island games.  Still, Iowa’s game are easier to find on TV as well as free.  The Big 10 is more popular and more heavily watched throughout the country, especially during a season where the Big 10 is head over heels better and more competitive than every other conference in the nation, especially the A10.  Advantage Garza.

The other aspect of this vote is how the media portrays the two players.  Here is a picture of the latest video today from CBSSN: 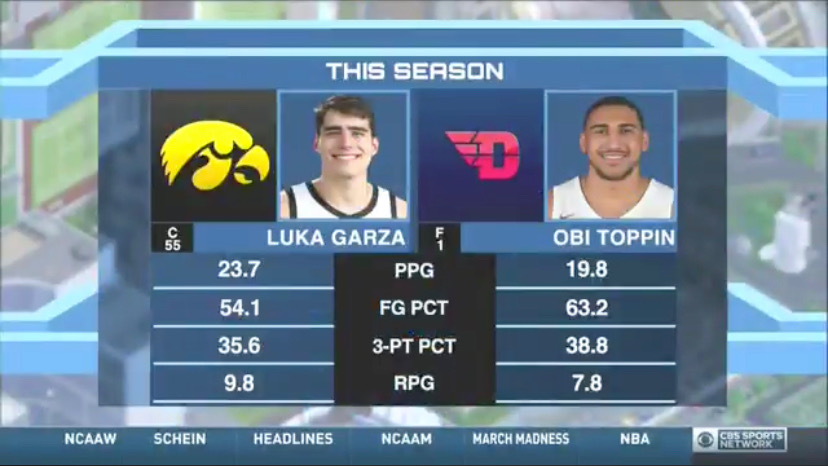 What’s the first thing you see?  Oh, it’s points per game, in which Luka Garza has a huge advantage.  CBSSN did show how Obi Toppin has a much better FG% and 3FG%, but still, the first thing that draws the attention of the viewer is the PPG.  I’ve stated earlier how that is indeed an impressive number, but it is inflated due to the volume of shots he takes each game.  None the less, advantage Garza, again.

Because of these two things, I believe Luka Garza is going to win the award.  Not that he doesn’t deserve it because he has had an incredible season, but I personally believe (and yes it is a bit biased) that Obi Toppin deserves it more.  He has more pros to back up his case than Garza, but many of those pros won’t be brought to light.  There’s only so much you can do as a mid-major.