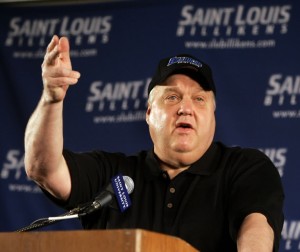 Preseason A-10 favorite St. Louis hit a snag today as the University announced head coach Rick Majerus will sit out the 2012-2013 season due to health issues.

“Rick is in a California hospital undergoing evaluation and treatment for an ongoing heart condition,” Director of Athletics Chris May said. “His health is the most important issue right now, and our hope is for full and complete recovery.”

“I appreciate what Rick has done to return SLU men’s basketball to national prominence,” University President Lawrence Biondi, S.J. said. “I know that he would like to be here with his players and coaches this season, and all of us at SLU will keep Rick in our thoughts and prayers during this difficult time.”

SLU assistant Jim Crews will fill in as interim head coach in Majerus’ absence.
The Billikens have been pegged as a chic pick to finish atop the A-10 standings after returning most of last season’s 26-8 team that took top-seeded Michigan State to the brink in the NCAA tournament’s round of 32.
Crews takes over as a seasoned leader, having 24 years of experience as a head coach, compiling a 354-348 career record while at Army and Evansville.