The Ramblers got out to a quick 9-4 lead against ACC foe Virginia. After retaking the lead within the first minute, the Ramblers led for nearly 28 minutes, but could not find the bottom of the nets enough in the fourth quarter to come out on top. Maya Chandler and Sitori Tanin both had impressive games. Chandler scored a career high 20 points. She hit a couple momentous shots. Chandler hit a three pointer at the end of the first and the end of the second quarters to extend Loyola’s lead each time. The Ramblers came out ready to go in the third quarter. They traded buckets with the Cavaliers for most of the period. The Ramblers had an 8 point lead early in the third quarter, but couldn’t extend their lead past that due to some inopportune turnovers. After Virginia took their first lead since the first minute of the game, Kira Chivers drove to the hoop for a layup to give Loyola a 1 point lead entering the fourth quarter.

The Cavaliers used a steady dose of fastbreak layups and post play to give themselves a 4-6 point lead for most of the fourth quarter. Loyola’s best chance came with four minutes left in the last period. Anna Brown hit a deep three pointer to trim the deficit to three points. After that Virginia would rattle off 6 straight points after two missed three pointers and a turnover by Loyola. The Ramblers gave Virginia all they could handle, but it was just short of enough.

Maya Chandler was in control of both ends of the court for about three quarters of this game. She scored at all three levels, drew fouls, and found her open teammates for easy baskets. Her 20 points were a career high, and Chandler is now averaging nearly 16 points and 5 rebounds a game on the young season. Tanin played a great well-rounded game. The Ramblers needed her to play tough under the basket because two of their post players (Emma Nolan and Julia Hoelfing) were sidelined due to injuries. She did that and more. She had 11 points, 12 rebounds, and 4 assists. Tanin is now averaging 11 points and 6.3 rebounds for the year. Some of the Loyola role players stepped up and hit three pointers in the first half including Sophia Nolan, Kira Chivers, and Mallory Ramage. Sophia Nolan finished with a career high 12 points.

True Freshman Kira Chivers stepped on the court early in the first quarter once starting point guard Sam Galanopoulos was hit with two quick fouls. She played the fourth most minutes on the team with 28. She constantly is applying full court pressure and “getting up in people’s chili”. That phrase was coined by head coach Allison Guth as a way to describe her intense defensive pressure on other ball handlers. Chivers finished with 5 points and 4 assists. I asked coach Guth what she wants to see out of the true freshman next. Guth responded by telling me that she wants to see Chivers become the floor general. “She has the quietest, most kind, beautiful voice. She needs to learn to use a different tone, use her diaphragm and get our team into what it needs to be doing.” With high potential, comes high expectations. But Coach Guth has faith in her young point guard to achieve it.

Loyola will take on the Eastern Illinois Panthers on November 20th at 2 PM. The Ramblers will travel to Charleston, Illinois in search of their second victory of the year. The Panthers are 3-0 after two close victories against Western Illinois and former conference mate, Valparaiso. 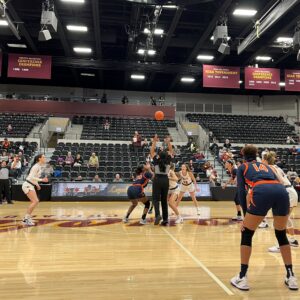