We have heard about it all this season:

“Duquesne has an easy schedule.”

“The Dukes haven’t played anybody and still lost to two bad teams.”

There are plenty more variations of these phrases, but they are most certainly valid.  Personally, I am all in on the Dukes, but for most fans, they need to see a road win against a quality opponent.  They drowned out some haters already with a win at “home” over Saint Louis.  They have rattled off 5 straight wins in the A10, which by any standards is pretty good, even for Duquesne.  Regardless of whether you are buying into the Dukes or not, you cannot argue that this team is good enough to finish in the top 4. The Dukes are 77 on KenPom and 55 in the NET as of this writing.  They are getting after it on defense and doing just enough on offense to win games.  That’s good enough for the A10.  They have three guys that can do it all in Carry, Hughes, and Weathers.  They get great help from role guys in Baylee Steele, Tavian Dunn-Martin, and Maceo Austin.  This is a good team, something that this league has not seen in a while out of Pittsburgh.  Now, it’s time to prove it.

They can compete with anyone in the A10, and yes that means Dayton.  Obviously those Dayton games are a few weeks away, but for right now, the biggest test of the conference season is tonight at the Ryan Center against the red hot Rhody Rams.  What is one thing the Dukes are lacking? That golden win in the first quadrant.  This is a win that can get this team rolling.  This team has many opportunities for quad 1 wins in conference, but they need to get over the hump and get that first Q1W.  The NCAA tournament is a far stretch for this team at this moment, but good wins outweigh bad losses.  Selection Sunday is a while from now.  Duquesne isn’t in the field as of now, but they should ask themselves, “Why not us?”  That can be answered tonight in Kingston.

Keith Dambrot easily has these guys bought into this new culture and style of play that Duquesne is displaying.  Now it’s time to put up a quad 1 win or shut up like in years past.  The Dukes just need to picture Herb Brooks saying “Go out there and take it”.  That should do it. 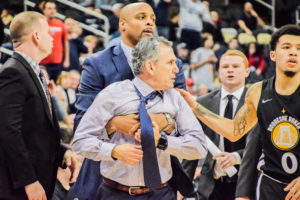 If you’re a Duquesne fan or player, don’t this picture just get you jacked up??