In short, yes. Following Rhode Island’s convincing win over West Virginia (along with VCU and Dayton losing to Charleston and Tulsa), it looks like the “top 4” in the Atlantic 10 isn’t so static. I still believe Davidson and Saint Louis are the frontrunners to win the league. The Wildcats almost took down Temple without potential A-10 POY Kellan Grady (and frankly, probably should have won), and Saint Louis almost pulled off a road upset that would’ve put them in the at-large conversation.

Dayton and VCU, however, are starting to show some concerning signs. The Flyers dug themselves out of a first half rut against Tulsa, only to allow a second half run from the Golden Hurricanes that would put Dayton away for good. As good as VCU’s defense has been, the Rams have a concerning turnover issue, ranking 271st in the nation at protecting the rock. Despite coughing it up only 16 times to Charleston’s 23 this past weekend, some untimely turnovers by the Rams allowed Charleston to get hot on the other end of the floor and ultimately put VCU away in the final minutes.

But now it’s time to talk about Rhode Island. The Rams defeated Bob Huggins’ scrappy West Virginia team in Mohegan Sun despite an awful first half officiating that put both teams in dire foul trouble. There were 56 fouls called the entire contest, and the first 20 minutes of action took 70 minutes to play. That does not make for entertaining basketball. However, the final 10 minutes were a heck of a lot of fun. 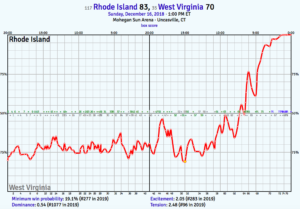 Kenpom’s win probability chart shows the Mountaineers had higher than an 80% chance of winning, having a 2 point lead with 15 minutes remaining. Then Rhode Island clawed back, hitting some clutch shots and attacking the rim. West Virginia looked stifled on the other end of the floor, and Jeff Dowtin and co. took advantage in transition. Cyril Langevine was a huge key to this win, as his physicality down the stretch helped secure some big rebounds and earned him a scrappy bucket in the post around 4 Mountaineer defenders. This dish from Dowtin to Langevine was probably the dagger.

So it’s time to wonder just how much noise Rhode Island can make in conference play this year. URI was tagged as a team to take a step back, losing Dan Hurley and a core of 4 strong senior guards that led the Rams to a regular season A-10 championship and a trip to the Round of 32 in the NCAA Tournament. David Cox, however, has been turning things around in the month of December after a shaky start to the season, and when Jeff Dowtin and Fatts Russell are playing to their full potential, this team is dominant.

I’ll say for one, the computers have loved Rhode Island in the past couple of games. Following a road loss to Providence where the Rams scored just 50 points, URI ranked 128th in Kenpom and was still shaking off the rust from a bad home loss to Stony Brook a week prior. But a convincing road win over Holy Cross and a neutral site win over West Virginia has boosted the Rams’ Kenpom ranking up to 93rd, and though they’re still the 5th best team in the A-10 according to these rankings, they’ve closed the gap significantly.

Rhode Island’s three point shooting hasn’t necessarily gotten any better. The Rams are shooting at a 21.2% clip as a team this year, one of the worst percentages in the entire country. The difference seems to be the looks the Rams are getting. URI had just 15 assists total in losses to Providence and Stony Brook, but the Rams had 17 dimes in the most recent win over West Virginia. Two point shooting has been great in the Rams’ last 2 wins as well, including 23-35 (65.7%) against Holy Cross. As the video above indicates, it’s a lot easier to make shots when you’re above the rim rather than 15 or 16 feet away. URI has to remember that.

I like Rhode Island’s scrappy and physical style of play, and I think it will make for some interesting conference games. Most notably, Saint Louis and VCU have been poor three point shooting teams as well, meaning any time one of these three teams meet, it will be a slug fest inside. Rhode Island has some of the best bigs in the conference in Cyril Langevine and Jermaine Harris. The latter needs to stay out of foul trouble and is still developing in his freshman season, but the potential to grow is there. What distinguishes URI from a team like Saint Louis or VCU is guard play. The Billikens and Rams have not been great taking care of the basketball in the backcourt. Jeff Dowtin and Fatts Russell are committing less than 4 turnovers per game combined this season, which is really pretty good for a pair of guards that play a significant amount of time. They’re also dishing out a combined 7.6 assists per game.

I’m very curious to see how Rhode Island fairs in the Diamond Head Classic. It certainly isn’t the strongest field of teams. URI will be the favorite over Bucknell in the first round, and a game against TCU in the 2nd round could be very interesting. Should the Rams make it to the championship game, there’s a good chance they’ll get to face a 1-loss Colorado Buffaloes team. It should be exciting. Depending on how the Rams look heading into A-10 play, I like this team as a sleeper to make a run at the crown. We’re seeing the Rams grow up, and I’ve really been waiting for Dowtin and Russell to emerge to full potential once again. We saw plenty of that against West Virginia. Though they were picked to finish 5th in the conference, I wouldn’t count out Rhode Island as we wrap up non-conference play. David Cox has these Rams moving in the right direction.