If there’s one thing that might rival my love for college basketball, it would be Star Trek. Back in December, we did an article If A-10 teams were Game of Thrones characters, so now we’re back with the Trek edition!

Disagree with my selections? Take it to our forum to discuss.

Much like Spock, Davidson has learned from the best. Bob McKillop has lead Davidson to the brink of the Final Four, and has helped nurture two of the most prolific scorers in recent memory. Stephen Curry and Jack Gibbs have learned from MicKillop like Spock learned from his father, Sarek.

If there ever was a man who knew who he was, it was Benjamin Sisko. He loved the spotlight, and thrived when he had to be “the guy” to make the tough decision. Sure, Sisko was not without his flaws, but at his best, he was absolutely one of the most badass guys ever. Don’t mess with The Sisko!

No matter what, Hosi Sato just couldn’t figure out who she was, and neither can Duquesne. The Dukes are underdeveloped, and frankly are never really any good. No one knows what their team identity is, or what direction they intend to go. They’re just kind of…there.

Damar had a habit of constantly living in the shadows. Every now and again, he would do something that would surprise us, and make a move or two, but for the most part, Damar was consistently in the background. Fordham has lived in the basement of the Atlantic 10 for years now, and the Rams seem content to live in the shadow of the Dukat’s of the world for the time being. 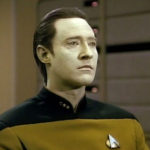 George Mason is a team on the rise, constantly learning. Since their jump from the CAA to the A-10 in 2014, the Patriots have been on a slow, but steady, upward trend. They won’t become “human” overnight, but like Data, their goal is to just keep learning and getting better.

Without a doubt, George Washington is one of the youngest teams in the A-10. They may be a mess for a little while, but once they figure it out, they’ll be as good as anyone else…they just gotta get there first, and the growing pains are tough. They have a habit of coming through when you least expect them to as well, so never let Dax, or the Colonials out of your sight.

Back in the day, La Salle was really was LEGIT, and they’ve manage to remain relevant since. The Explorers last made a postseason push in 2011, reaching the Sweet 16, but have been in the middle of the pack ever since. And c’mon, the father of Spock has to go with the team with the nickname “Explorers.” I rest my case.

The minutemen are young, fast-paced and slightly reckless at times. Like Tom Paris, until they go through the growing pains, UMass is going to struggle to fit the system. But once Tom became a bit more disciplined, he was an essential member of the crew, and always dependable. While UMass’ future is a little uncertain, if they follow the trend of Lieutenant Paris, they should be just fine.

Like Garak, this team just has no fear. Every single time it looked like the Rams had backed themselves into a corner, they managed to fight their way out. When people were counting URI out the most, they fought back, and always found a way to get the job done. It might not always be very pretty, and it often required getting their hands dirty, but it was effective-like Garak.

The team that is so bad, they’re good. Hear me out on this one: Quark started as the character who fans loved to hate, but hated so much, they began to love him. Every time you think you’ve got him figured out, he’ll throw a curve ball at you and truly surprise you. His methods were often unorthodox, but they worked out-at least sometimes. Just enough to keep him in the mix of everything.

While this may apply more towards the Bonnies’ fanbase, I think you’ll agree that Will Riker is the perfect match for Saint Bonaventure. If there’s one think Riker knows how to do, it’s how to have a good time, while having a drink or two along the way. When things are going well in Olean, the Bonnies’ swagger might give Riker’s a run for his money.

I picked Miles O’Brien here for one reason, and one reason only: he is always getting injured! I can think of at least half a dozen Deep Space 9 episodes where O’Brien ended up in the infirmary, much like the Hawks last season. When he is healthy, Miles is a hard worker and always gets the job done. But when he’s out of commission, it can be a struggle to keep everything up and running at times.

Just when we’d thought we’d seen the last of the Billikens, it looks like they’re back and more dangerous than ever. Gul Dukat had a pattern in his life: when he was in power, he could be as lethal and bloodthirsty as anyone in the entire Quadrant. Just when it looked like he was at the height of his power, everything would come crashing down on him. But one thing we’ve learned over the years: like Dukat, Saint Louis is a team that won’t stay down for long. And each time they rise, they’re even better than the last.

Worf never seemed to ever fit in, no matter where he went. Whether on the bridge of the USS Enterprise-D or in ops of Deep Space 9. That never stopped Worf from being a total badass, and being consistently one of the most hard-nosed (or foreheaded) guys in the entire Quadrant.