Pre-season rankings are always fun. We all sit down and we write down where teams will finish in the conference, all off the top of our head with some knowledge to how good or bad we think each team will be.

Here’s an alternative way to do it…pick the outcome of every game.

We have found over the past years that this is the most effective way to pick rankings. You can add variables however you would like, such as home vs away, past history of matchups, quality of coaches, and how good you think each teams’ rosters are.  For me, I factored all that into my picks, with maybe a few other things, like how certain teams drop stinkers every year, or there’s at least one or two major upsets each season. At the end of the hours worth of analyzation, I came to this conclusion:

As a result, it left my final preseason ranking as follows: 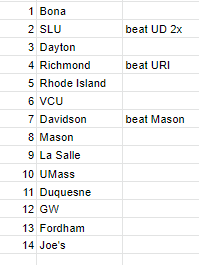 Analyzing it even further, I came to these conclusions/takes about my own outcomes:

St. Bonaventure really does have a easy schedule

Besides the three losses that I gave the Bonnies, the path was really made for them to win the regular season title again. Don’t get me wrong, the Bonnies are very talented, but I really find it hard to find more than 4 losses. I gave them 3 with the potential of losing another to possibly Richmond, VCU, Davidson, or even Mason. But 3 is very respectable to how good this team is projected to be.

I am high on SLU, Dayton, and Rhode Island

SLU and Dayton have two of the most talented rosters in the A10 outside of Bona, but the big question is will it mesh right away? I say yes for both the Billikens and Flyers. Both teams are well coached and have had a good history with good recruiting classes and power-5 transfers making a big impact right away. I can see these two teams fighting for 2nd and 3rd. I gave 2nd to SLU because I think Javonte Perkins will play a big factor in the success of the Billikens, which will lead to two wins over the Flyers during the season.

As for Rhody, I was surprised as to how high I was on them. Off the top of my head, I originally was not excited about them, but after looking at their roster, they have a lot of guys returning from a decent team that got bit by the injury bug. They could even surprise some teams and make the top 4.

I like Richmond, but I’m not sure if they are a better team than SLU and Dayton, two teams that have a good history of winning against the Spiders. I have them beating URI, but I could also see this team losing to them or even VCU twice. They ended up in 4th, which is still respectable for Richmond, but I’m not buying into the 2nd place Spiders like what I’ve seen over the past few weeks on other rankings and previews.

VCU will hang in there

It’s no question that VCU is getting written off a bit after losing two of its star players to injury. But, they will get Baldwin back eventually, and they still have a great front court. Not to mention that they are very well-coached. I have them at 6th after it was all said and done, but this team could easily finish in the top 4 as well.

I am totally drinking the Kim English cool-aid, but when I did this little project, I found out that there are still many other rosters that I think are better than George Mason’s. After thinking about it, I do believe Mason has the tools to be a good team this year, even finish as high as 5th, but history says that there will be growing pains with a first year head coach in the A10. I had a hard time thinking differently from this. Still, 10-8 is very good for Mason in English’s first year.

As for La Salle, I like Jamir Brickus, plus they brought back a lot of key pieces from last year’s team that flashed some good things. They seem to be buying into Ashley Howard’s system as well, so I guess I am buying into Howard as well. I like this Explorer team, but just like I said about Mason, there’s just other teams that I think are better than La Salle. 9-9 is still a good season for them, though.

Then there was UMass

I know the UMass fans won’t like seeing their team in 10th, but that’s with a decent 8-10 record, which you can say is probably the floor for this team. I just don’t buy into Matt McCall as a coach at all. Also, I’m not a big fan of the transfers that he brought in. They have some pieces, but nothing flashy. Its a good enough team to win 8-9 games and keep them out of the pillow fight, but that’s it.

Duquesne is going to be very bad

I really studied Duquesne’s roster hard, but I just don’t see it. The transfers Dambrot brought in don’t impress me. The Dukes most likely have a better team than the three teams below them in my ranking, but 5-13 is not good. This might be my biggest hot take for any team in this conference.

Fordham got a new coach in Kyle Neptune, who has already hit a few home runs on the recruiting trail. But that’s for next year and beyond. Neptune brought in some intriguing transfers from power 5 schools, which is something you never saw with Neubauer as head coach. After hearing about what Neptune is doing already with this team makes me think that he is already a better coach than Billy Lange as St. Joe’s. Both Fordham and St. Joe’s have little talent on their rosters, but it might now be the battle of who is the better coached team, which now could very well be Fordham.

All of this will probably be wrong

This conference is so crazy year after year that this will all most likely be wrong. In fact, when was the last time the  preseason favorite won the conference?

Answer:  2017-18 Rhode Island Rams. The preseason favorite has not won the conference in 3 seasons.

This A10 season should be fun. Buckle up.