It is no secret that over the past 20 years, Mark Few has turned Gonzaga into a powerhouse of college basketball. Back when Few was hired to coach the Bulldogs, I’m not sure anyone thought that a small school of just over 5,000 students in Spokane, Washington, would become one of the best programs in college basketball.

For mid-major basketball, Gonzaga is the Mecca of what you hope your program to become. Great recruiting, coaching, and development along with consistent success in the conference and NCAA tournament is the recipe of any college basketball program, but can propel a mid-major school to new heights.  Every mid-major program wants that. And by mid-major, I mean conference, NOT necessarily program. Gonzaga has left the mid-major label in the dust many years ago and has not looked back.

Since Few was hired to lead the way for the Bulldogs in 1999, Gonzaga has made the NCAA tournament EVERY SINGLE YEAR. Along with that, they have won at least a share of the WCC regular season title 20 of those 22 years.  I think Zags’ fans can live with not winning those two years. Not only that, but they are consistently ranked in the AP Top 25 every year for multiple weeks. Check out the chart below and tell me you’re not impressed. 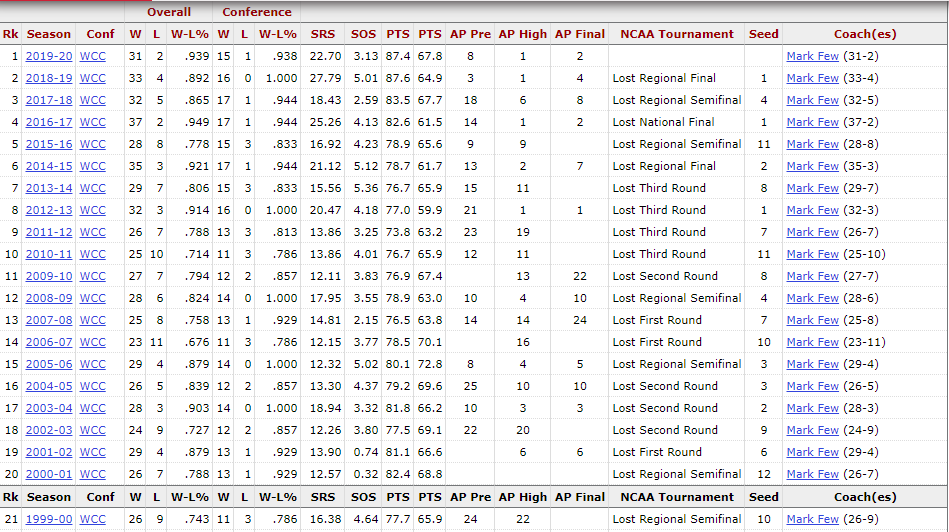 Let’s get to development and recruiting. Since his hire, Few has 13 NBA draft picks under his belt, including big names such as Rui Hachimura, Domantas Sabonis, Kelly Olynyk, Brandon Clarke, and Adam Morrison, to name a few. In recruiting, Few dominates the international scene, as evidenced by the signings of many European players, some whom I listed above. Many of these players were 4 star recruits coming into the college level, which shows that you don’t need one-and-done players to build a powerhouse. Throughout his tenure at Gonzaga, Mark Few has recruited well to get 4 star players to come to Spokane, but not all his players are that highly esteemed out of high school.

If you can recall a player back in 2017, a dude by the name of Przemek Karnowski, out of Poland, was a force down low for the Zags, averaging 12.2 PPG and 5.8 RPG by his senior year. Even if they are decent numbers, Karnowski was not rated or highly regarded out of Poland in 2012, but ended up being a key piece of Gonzaga’s 2017 National Final run in the NCAA Tournament as well as being the #1 team in the country. Even Domantas Sabonis, who is now an NBA All-Star for the Indiana Pacers, was not rated out of high school from Lithuania.  He ended up staying two years in Spokane before going to the NBA draft after the 2016 season when he averaged 17 PPG and 11 RPG.  These are just two examples of how Mark Few can find many diamonds in the rough to make his program one of the best in mid-major basketball and the country.

Now, how does this compare to Dayton? The Flyers are even close to what Mark Few has with Gonzaga!

That’s valid, but here’s my point…Dayton is on its way. Looking at what Dayton has done since 2011, when Archie Miller was hired. Dayton had the look of a mid-major program that just needed a spark to get it off the ground again. Yes, the history is rich with great coaching and great players, but we all know that the program had some hard times after the good times. What Archie was able to do was turn on the jets for this program, all starting with the Elite Eight run in 2014. He kept it up with another 3 NCAA tournament appearances over the next 3 seasons before his departure to Indiana. When Miller left, we all know this meant the momentum that the program gained over the past 4 years was going to have to pause with a rebuild, no matter who Neil Sullivan hired.

Although we were all right with the rebuilding notion of the program, Grant has give the program that much needed spark and exceeded expectations more than we could have ever imagined. Even in year 2, Dayton looked like they could be an NCAA tournament team before a few bad losses to George Mason and Rhode Island near the end of the season. That team came back in year 3 and made this program look like what it could become, a mid-major powerhouse that could compete with any power 5 program in the country.

How does this compare to Gonzaga? Well, for starters, Anthony Grant doesn’t look to be going anywhere any time soon, just like Mark Few. Being an alum of the school you are a head coach at is a great situation for Grant, not to mention he is in his 50s now and is most likely ready to settle down from moving all over for a coaching job. With the way Grant is moving the program right now, that is a great sign for Dayton.

Next, let’s look at the fan support and exposure. Gonzaga doesn’t have to compete with too many big time programs out west besides UCLA, Oregon, and Arizona, to name a few. They are the premium program that fans want to watch. Dayton has the Big Ten and ACC to compete against. That doesn’t mean Dayton can’t get the same exposure that Gonzaga does. It helps that UD Arena is one of the best home courts in college hoops with a top 25 attendance mark every year, not to mention that UD Arena hosts the First Four every year and has hosted the most NCAA tournament games over any other arena in sports. It helps that Flyer nation is one of the best traveled fans in the country, as evidenced by the in-season tournaments where Flyer fans flock a plethora of seats to watch their beloved team. That only adds to the exposure of the school and the program to recruits, fans, and media.

Next, Gonzaga is winning the WCC every year and making the NCAA tournament frequently with a 1-4 seeding in the process. Dayton did make the tournament 4 years in a row under Miller, with two 11 seeds and two 7 seeds, but Grant showed this season what Dayton could really do with a potential 1 seed in the NCAA tournament.  Along with that, under the combined efforts of Miller and Grant, Dayton has won 3 of the past 5 A10 regular season titles. With the way Dayton won the A10 this past season, you can expect the Flyers to be in the hunt to win the A10 every year along with perennial NCAA tournament bids.

With recruiting and development, this is where Grant is the most like Mark Few. We saw what he did with Obi Toppin in two years, who was only a 1 star player out of high school. Jalen Crutcher was a 3 star recruit out of high school, who has his sights at a first round NBA draft selection after next season. Even Ibi Watson, who came over as a transfer, looks to be a NBA draft pick as well. Grant has also started to recruit beyond the 3 star and below, and has proven to get commitments from highly rated guys such as Dwayne Cohill and now DeRon Holmes, who were both 4 star recruits out of high school. Holmes’ recent commitment is a Top-50 prospect who is now Dayton’s highest rated recruit in program history. On Monday another 4-star and Top 100 recruit committed to the Flyers as well in Kaleb Washington. Not to mention, Malachi Smith being the younger brother of former Flyer stud Scoochie Smith bodes well to the potential this program has over the next 4 years.  You think about these guys, and the potential that his current recruits have, and you have a program that is itching to have perennial draft picks for years to come and a pn annual contender in the Atlantic 10.

Now, back to the initial point, is Dayton the Gonzaga of the East? Not yet, but it looks like Grant is leading the Flyers into that direction. Both programs are poised to dominate their respective conferences for years to come. Both are recruiting against the big boys and are winning those commitment battles. Both are playing in mid-season tournaments with the big programs and are beating those teams. Both look to have NCAA tournament bids for the foreseeable future.

Dayton is clearly not a mid-major program anymore. They are playing, recruiting, and growing at a high level. Because of this, Dayton is going in the right direction to where Gonzaga is now, a small school turned into a national college basketball powerhouse.