March 4th 2021 will mark 1 year since Rhode Island faced a #3 Dayton team at home in Kingston, RI. Dayton fans likely have fond memories of what ended up being the second to last game of seeing their Obi Toppin led Flyers squad make light work of a quality opponent. Rhode Island fans (including myself in the Kingston crowd), not so much. Dayton easily rolled over Rhody 84-57 in the Toppin Brother Bowl. Obi Toppin dropped an effortless 20 points, and Jacob Toppin scored 5 points for Rhody (but also logging 7 rebounds). Both teams find themselves Toppin-less (for different reasons) and overall in an entirely different place than a year ago. But with time as the ultimate equalizer, both teams are ultimately left with the same goal to save their 2021 season:

Win the A10 Tourney.

Dayton Flying Into A10 Tournament As A Darkhorse

Dayton finds themselves coming off a shaky close to an inconsistent season, but have shown to be capable of playing with the top teams in the Atlantic 10. Despite being a team with a wide range of outcomes, they feel like an ideal Darkhorse pick to run the table in the A10 Tourney.

One of those aforementioned late season blemishes on Dayton’s NCAA Tournament resume is their double-overtime loss (89-91) at Rhode Island’s Senior Night back on February 16th. Prior to that, Dayton had beaten URI 67-56 at home in January of this season. It’s worthy noting that Dayton had led big (by as much as 18) in that double-OT thriller before falling to Rhody. 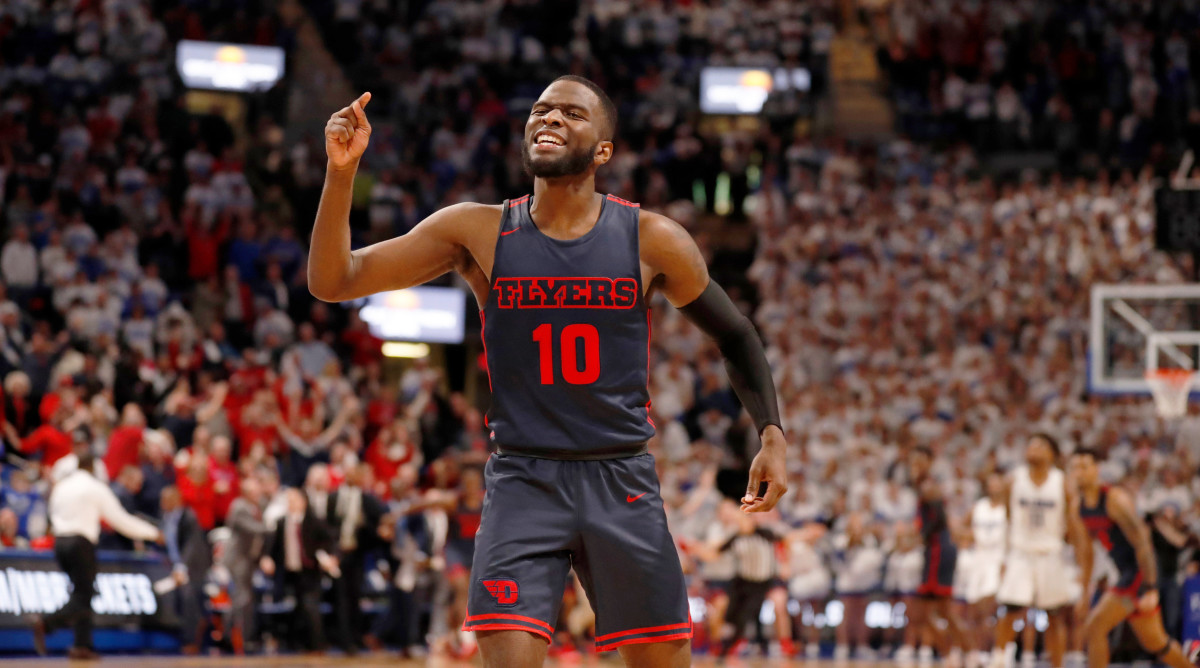 It’s hard to imagine Flyers star Jalen Crutcher going out like this and failing to make it to at least the weekend of the A10 Tourney.  Crutcher’s had an impressive senior campaign, with per games averages of 18.2 points, 4.9 assists, and 3.7 rebounds. Ibi Watson has been a problem for the A10, but especially Rhody – he’s averaged 19 pts in the two previous games against Rhode Island this year. Zimi Nwokeji is another Flyer to watch, especially due to his impressive 29 point, 9 rebound effort in the double-OT game against URI. Nwokeji fouled out after 40 minutes of play, but was on fire from the field and free throw line for Dayton, going 9 of 10 from the field, and 9 of 11 attempts from the FT line.

Let it be known, this is Dayton’s game to lose. Unfortunately for a struggling Rhode Island squad led by Fatts Russell, this Dayton team seems to have too much left in the tank. The Rams stole the 2OT game against Dayton to split the season series, but Dayton looks primed to win the rubber match.

Dayton’s Keys to the Game:

Dictate tempo from the tip. Force Rams other Fatts Russell to create/score. Keep Crutcher out of foul trouble.

Rams Runnin’ Out of Gas

Defense remains the biggest concern for the Rams, who find themselves reeling after losing 6 of their last 7 games. URI’s two most recent losses against George Washington and Duquesne are especially troubling. As each bottom-half team scored with ease, and dropped their highest point totals in A10 conference play against Rhody.

But on top of totally trending in the wrong direction, the Rams will be missing key offensive cog Jeremy Sheppard. This week Rhode Island coach David Cox announced that the star senior guard won’t be available to play against Dayton.

David Cox says Jeremy Sheppard will not be available for #URI on Thursday vs. Dayton.

Big, big loss. Hate to see that for anyone, let alone a senior.

Not great news, obviously, but even worse news for super optimistic Rhody fans. Even for those bullish on an upset by the Rams this round, Rhody’s chances at a deep A10 Tourney run may need a little more magic. Sheppard’s ankle injury would likely force him to miss more than just Thursday’s game against the Flyers.

Rhody won’t be able to replicate their last game against Dayton. There’s just no easy solution to fill in for those numbers put up by Jeremy Sheppard (17 pts, 4 assists, 6 rebounds). As a result, David Cox will need guys like Allen Betrand and Malik Martin to contribute more on the offensive end. In addition to those two getting more shot attempts, Rhody needs to have at least one of (Leggett, Betrand, Martin, or Jalen Carey) to step up as a ball-handler when Fatts is off the floor. As easy as it sounds, finding someone to do just that and limit turnovers has been an issue all year.

Cox said Malik Martin is the likely starter in place of Jeremy Sheppard (right ankle). Will use Carey, Betrand and Johnson off the bench as well. #URI

All that being said – the silver lining of Sheppard’s absence is that it likely primes us for a LOT of Fatts Russell touches and shot attempts. The Rams legend has been active in the Rhode Island records books lately. It seems within the realm of possibility that he gives us one last huge scoring outburst. Can he break his own URI single-game scoring record of 41 points? Even if it’s in a losing effort, I certainly would like to find out! 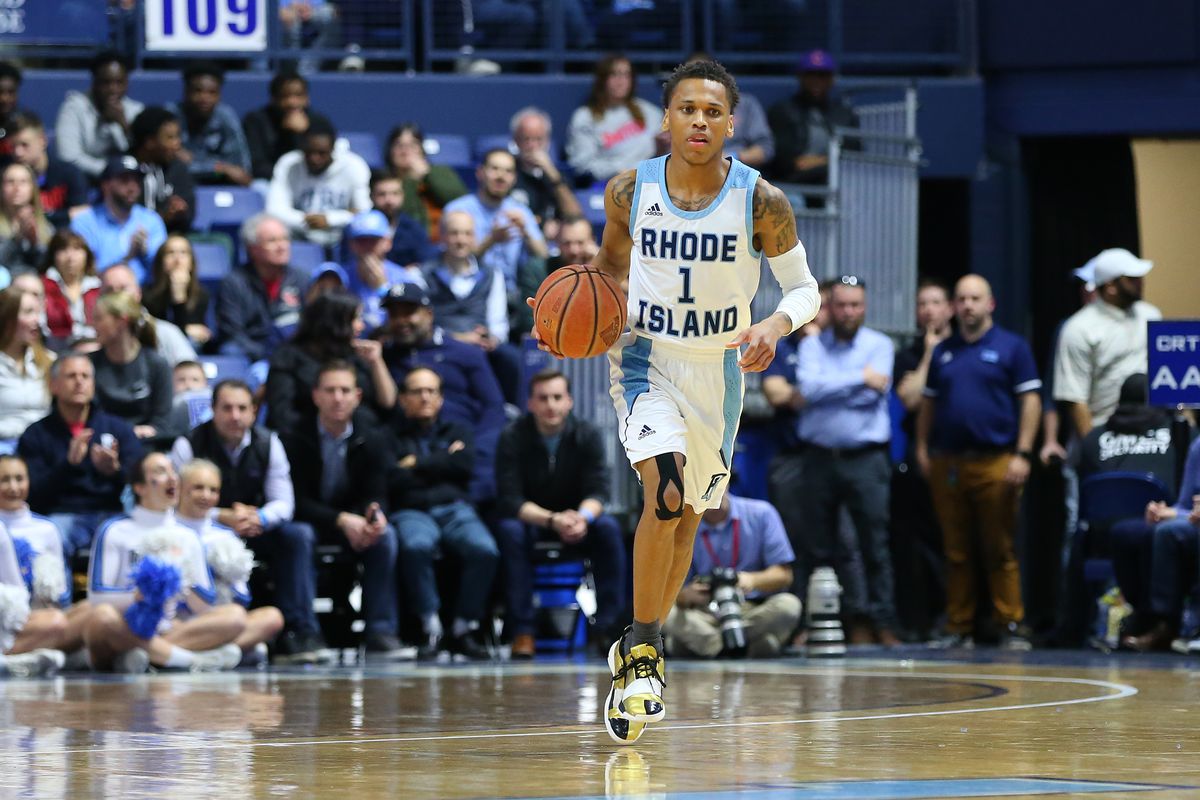 On the defensive end, they have their work cut out for them. Crutcher and Watson seem to be capable of sleep-walking into combining for about 40 points any given night. As mentioned, the freshman forward Nwokej has been a problem for Rhody. I’d expect some combination of Makhi Mitchell and Antwan Walker to be tasked with containing him.  If the Rams are able to muddy things up and force a ton of turnovers, they might have a chance to pull the upset off. St. Bonaventure was able to force 21 turnovers by the Flyers, in their 55-52 slugfest. The Bonnies were outshot 30% to 45.5% from the field, allowing for Dayton to pull off the close win.

It’s unlikely Rhode Island can force 21 turnovers. BUT, likely their best option to attempt to recreate the ugliness of that game against St. Bona. Their chances don’t look great – but I can’t imagine ever feeling good about betting against Fatts Russell with his back against the wall.

Rhody’s Keys To The Game:

Make big stops to get Dayton’s offense out of rhythm. Get Ishmael Leggett going early on. Pray Fatts Russell has one final massive performance in him.