According to @GoodmanHoops Duke has a positive covid test, so their season is over.

'03, they also beat NC State. I don't know. I think they did exactly what we wanted a team in the A10 who was supposed to be top 4 to do. I'll trust your number crunching as I haven't really paid as much attention.

If SLU didnt have the covid interruptions and crappy play afterward, I dont think we would be having this conversation.

Bona03 said:
If SLU didnt have the covid interruptions and crappy play afterward, I dont think we would be having this conversation.
Click to expand...

Things could get interesting with Virginia's positive case. The ACC would be wise to at least consider cancelling the tournament. Everyone remaining is a lock. Given that Cuse played Virginia yesterday, a positive test in their program certainly doesn't sound unreasonable. The potential for multiple programs to test positive and miss the NCAAT is at higher risk right now than the ACC should be comfortable with. If multiple ACC teams suddenly become ineligible and have to be replaced, that will put a taint on the dance that no college basketball fan should want any part of.

The tournament should be delayed. The networks will bend over backwards to accommodate a reschedule. I would doubt the host locations have anything else going on. Take a team like Syracuse - yeah yeah whatever - if they are selected for the first four games, it's very likely after playing Virginia yesterday that they won't even be able to take the court T or W night. We can hate on the Orange all night, and we do, but this isn't good for basketball. As you say, no one wants a tournament where favorites could be out before it gets off the ground. They should make every possible effort to ensure this year's champion isn't stained with the *covid year.

You guys going to Dayton Sunday just stay away from the players and staff. The conferences with title games Sunday ought be a bit nervous right now.

Kansas is out in the Big 12 now. As great as these tournaments were, we knew this could happen. Perhaps the A10 was smart in moving up their tournament a week.

Wichita St on the ropes. If they go down its the opening St Louis needs

'03 so long as nothing happens this weekend. Otherwise the story will be, why wouldn't they give themselves over a week before the NCAA instead? Just hope, pray, cross your fingers, sacrifice a small animal, whatever floats your boat, that we get into and out of Dayton healthy. VCU as well.

Wichita clawed out a 1 pt win so they survive. Bad for SLU but I feel like they will back door in somehow if there are other positives out there

If you are pulling for st Louis to get in, you want lsu to beat ole miss. Then the loser of Colorado st and Utah st will drop and slu can slide in

Bona03 said:
If you are pulling for st Louis to get in, you want lsu to beat ole miss. Then the loser of Colorado st and Utah st will drop and slu can slide in
Click to expand...

I get they are A10 but fuck SLU and Dayton. They can keep their ass at home.

Rather watch an 18 loss ACC team than them.
C

And SLU is Lunardi’s last team in, at least for now.

I think slu and colorado st are a coin flip. I can make a case for and against each, they are so close. There are still 4 bid stealers out there: Oregon st, Memphis, Cincinnati and Georgetown. 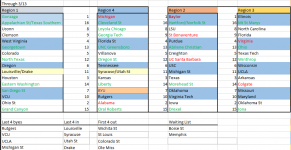 Those bid stealers wreaked havoc last night. Georgetown and Oregon St and Cincinnati is still alive. I hope Houston rolls them and Drake can stay in although it would be nice to see Brannen have some success at Cincy.

So,I have nobody else to tell about this really so here is how I did:
Like many, I got 67/68 teams. Louisville being the miss for Wichita St. 184/201 on the matrix had Lville in so that was a surprise. I thought if they screwed anyone in that range it would be UCLA.

I hit 13 spots on the seed list exact
I got another 30 within 2 spots on the list (my own arbitrary way to measure success)
I got another 19 within 1 seedline
I was off by more than one seed line on 5 teams (Oklahoma St, Wisconsin, UConn, Clemson, Florida)

Overall I dont think its too bad considering I dont have computers spitting things out to me. I'll be interested to see how I ran on the matrix.

As for the bracket itself, I think they did a pretty good job. I was glad Drake made it. I think they screwed Okla St. They should not have been a 4. They beat 6 ranked teams in the last 2 weeks of the season and nearly won the B12. They have Clemson too high.

Oh well, I learned quite a bit. Believe it or not, the Bonnies resume lines up with the 7 and 8 seeds and they really had us as the 1st 10. Must have been the lack of non conference and they didnt trust us. Enough bubble talk, now we can actually focus on ending Will Wade's tenure at LSU.

Well done, 03. Wichita State is a shock (!) #72 NET. No standout wins other than home vs. Houston. Certainly not deserving before Saint Louis or Louisville. It has the ring of "throw the football conference a bone"... to the 1 team that doesn't play football.

I am far from an expert, but though LSU would be around a 6 seed.

'03 - what did you see to make LSU an eight seed? Was it the average performance by them in the OOC. I know fans tend to put a lot into the conference tournaments, so perhaps making it to the finals was not as beneficial as I thought it'd be.
You must log in or register to reply here.
Share:
Facebook Twitter Reddit Pinterest Tumblr WhatsApp Email Share Link
Top