Menu
Install the app
You are using an out of date browser. It may not display this or other websites correctly.
You should upgrade or use an alternative browser.

Game is on ESPN+
Reactions: Bonafanatic, Bona84, Bill Russell and 1 other person

Soriano has been the closest thing they have to an offensive threat. He's bigger than Osun and might get him in foul trouble with his physicality if Shoon isn't careful. In their limited action, one of their guards Chris Austin has been decent? 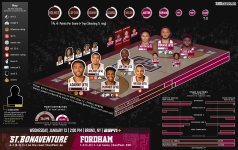 Take no A10 road game for granted. The Vegas line spooks me. We need to show up and execute, or we could be Dayton dos.
R

Bill Russell said:
Take no A10 road game for granted. The Vegas line spooks me. We need to show up and execute, or we could be Dayton dos.
Click to expand...

His uncle died recently, so I think he might be home for a funeral or something having to do with that. I've heard he likes it at Bonas and it's nothing more than a Family Matter.
Reactions: Citizen X and 3rdShayCripSet

Is Welch sitting out too? Seems like it. Has regressed all season...

Kyle should cut the shit. He's good. But not as good as he thinks he is. This is looking bad, but no better way to get other guys time than be put right into the fire. Winn this mofo.
1

Kyle definetly plays with a chip on his shoulder. I thought this team needed a defensive spark. Fordham has 7 made 3's, and is shooting them close to 40%. Theyre usually around 20% from 3 thats absurd.
B

GregMitch said:
Is Welch sitting out too? Seems like it. Has regressed all season...
Click to expand...

Regressed in 3pt shooting maybe? Still an excellent rebounder and plus defender for us though.
Reactions: 1946TobaccoBowlMVP, Bonafanatic, 3rdShayCripSet and 3 others

Ugly effort from Osun, though. He was in Coasting Caswell Cyrus mode.

Outstanding defensive effort in the second half, though. 10 or so years ago, SBU might lose a game like that. Now, though, we are good enough to grind out inferior teams—even if the style points are few and far between.
Reactions: Bonafanatic, simons22, res and 1 other person
C

Kyle's second half attitude was what I want to see from him all the time. Chip on the shoulder but poised and taking it to the basket.

Shoon needs to be better around the rim. He plays too small when putting up shots close. Not nearly enough of the basics- pump fake, absorb the contact to draw fouls, etc. Needs to get better. SLU is going to eat him alive the way he's played offensively vs A10. On a positive note offensively, his passing has been quite impressive for a fella his size.

I dont know and wont speculate on why Dom and Kyle continue to struggle so much from 3. Open shots, too. I just hope it gets better. Holmes will not shoot 70% + from deep forever.

I'm sorry for being a little whiny bitch after a 14 point (Covered the spread!) Winn, but these are all issues that have stuck in my craw for 3 of our last 4 halves of basketball, while beating bottom feeder teams by final margins that mask extensive periods of flawed play.
Reactions: Bonafanatic, simons22, Bill Russell and 1 other person

Shoon needs to get his head in the game. He looked at times disinterested. I still think we should run more offense through him and would like to see him get more chances to finish. He just doesn't look excited to me. He's got so much .. talent.

The 3pt defense is just killing me. Our best 3pt defense is a guy making a poor shot. And when they're hot, we see 11-2 runs like mid-first half. FU missed many quality looks from beyond the arc in the 2nd half and we should thank our luck stars they did. Experience has shown Duquesne, Davidson, those teams don't miss wide open 3's all game.

CB3PT - I don't think it's being a whiny bitch for pointing out glaring faults in a game that wasn't actually out of hand until under 2 minutes to go. That was an ugly Winn. We're standing around firing 3s at a 25% hit rate when it's so obvious that our best spurts are with dribble penetration and using our big man (our 1 big man left). And good when playing tight D to open up offense following opponents TO's or poor misses.

Kyle loose with the handle and with the temper again today. He and Dom are taking too long in this short season to figure out how to shoot, since they apparently forget over the summer. Hopefully they finish hot again if it's not too late.

The shooting is something I think will improve as they play more games. The numbers on the back of their stat cards show they can and will be better. Shoon is pressing on offense but he hasnt let it translate to the defensive end. He has been mostly getting the looks he wants but has not seen them go down. I think its a matter of time. This team has not had it easy this season so I am willing to overlook the few things that concern me until they are playing more regularly.
Reactions: brownindians85, Bonafanatic, Bill Russell and 1 other person
S

The way Shoon was passing today, it may be beneficial to use him more in the fashion that Stockard was used a few years back. Have him pop out to the foul line and run some offensive sets through him. As others have stated he continues to look weak around the rim. His inability to finish offensively hasn't harmed us yet, but it's something to start seriously paying attention to. Could chalk it up to lack of conditioning over the summer, but if we want this group to achieve anything of significance, he's got to get better.

Kyle's 3 pt shooting looks awful. Incredibly inconsistent - but one the benefits of Kyle's style of play is he doesn't usually force things. That being said, we can't have our star PG shooting 13% from 3.

What are we going to do with Vasquez? He continues to always seem overeager to chuck up that 3, which is fine if he's playing solid d and contributing in other ways, but I continue to be a little flummoxed as to why he keeps seeing the court as often as he is.

So once Roberts comes back, is it safe to assume we really won't go more than seven deep?
Reactions: Bonafanatic

3rdShayCripSet said:
So once Roberts comes back, is it safe to assume we really won't go more than seven deep?
Click to expand...

I hope not. A nine-man rotation is ideal, in my book. There’s no reason Shaw can’t give you 3-5 minutes per half. Vasquez needs to play to get/stay in any semblance of rhythm. We don’t want that kid leaving, too. He has some nice, albeit raw, elements to his game.
Reactions: simons22, Bona84, Bona03 and 2 others

Agree with BR on Vasquez. I wondered if I was missing something, but I think he looks decent out there. He's fast, big, strong, and can shoot when he gets going. He still makes mistakes but yeah, we don't want him leaving.
Reactions: simons22, Bona84 and Bill Russell
You must log in or register to reply here.
Share:
Facebook Twitter Reddit Pinterest Tumblr WhatsApp Email Share Link
Top Bottom