Pittsburgh, PA — Trying to pick an Atlantic 10 All-Sophomore Team seemed very easy on paper until seeing how many talented sophomores there are on this roster. The A-10 is usually known for its seniors and juniors as well with players having been developed, but the sophomore class makes this really tough.

Just for clarity, these lists are not in any particular order, so nothing is meant by the placement of each individual on the two teams.

The criterion for this event is from last season’s play, projections from this season, observations from watching games and discussions with various coaches.

De’Monte Buckingham Richmond– It would be impossible not to start this list where last season ended: with the Atlantic 10 Rookie of the Year. Buckingham was fourth Richmond in scoring (10.5 ppg), second on the team in rebounding (5.6 rpg) and first in steals (1.6 per game). His ability to change the game in several ways got the attention of players, coaches, fans and media in this league, and rightfully so. As a freshman, you only get one chance to make a first impression and Buckingham already has shown the ability to be scary good. With T.J. Cline and Shawndre’ Jones lost to graduation, Buckingham will need to step up as a leader and more is expected of him. His first test will be to start the season without Khwan Fore who is out 4-6 weeks.

Mike Lewis II Duquesne– No freshman was selected as Atlantic 10 Rookie of the Week more than Mike Lewis II. Lewis II received those honors from the Atlantic 10 staff, but when voting shifted at the end of the year to coaches, Buckingham edged him out for Atlantic 10 Rookie of the Year. Lewis II was asked to score at will last season and for the most part, he did. Now with Keith Dambrot as Duquesne’s coach, Lewis II will be asked to hone in his all-around game. Lewis II will be taking on more of a leadership role, which as a sophomore shows how much trust his teammates have in him.

Charlie Brown Saint Joseph’s– Charlie Brown was an Atlantic 10 All-Rookie selection and for good reason. He averaged 12.8 points per game despite more defensive attention being placed on him due to various injuries. Brown will miss a few weeks due to a left wrist fracture. Brown, a 2017 Atlantic 10 Preseason Third Team selection, will be back at full strength by conference play and that will be dangerous.

Isaac Vann VCU– Let’s get this straight right now, Vann may struggle the first couple of weeks or so but the potential that Vann provides it too good to leave off of this first team. In just 17 games with Maine, Vann was an American East All-Rookie selection leading his team with 16.4 points per game. VCU does have a new coach in Mike Rhoades but this should not affect Vann much. By conference play, Vann could very much be a nightmare for opponents to guard with his range and slashing ability from the forward position.

Jon Axel Gudmundsson Davidson– Gudmundsson he has shown the ability to score and no one limited their mistakes better in the conference as a freshman last year as Gudmundsson. What is scary is that Davidson coach Bob McKillop believes he has gotten better. Not as many will recognize what JAG did last season because Jack Gibbs and Peyton Aldridge were his teammates, but that did not stop him from making this list.

Cyril Langevine Rhode Island– On the defending Atlantic 10 champion Rhode Island, this post player will be the most important. Rhode Island’s post play is a question mark of sorts with Nicola Akele and Andre Berry among top returners, but none will have as high of an expectation as Langevine and the previous two Rams are upperclassman. It shows how highly regarded Langevine is and how important his success may be.

Jeff Dowtin Rhode Island– The Atlantic 10 Championships showed many what Dowtin is and can become. In 73 total minutes, Dowtin had zero turnovers, to say that is efficient would be an understatement. His scoring will go up with the departures of Hassan Martin and Kuran Iverson.

Josh Ayeni St. Bonaventure– Ayeni will be the most important post option for St. Bonaventure and will see improvement. What held me back was not enough consistent performance last year. Now with him being counted on more, it would not be surprising if he made the jump to the top five sophomores. 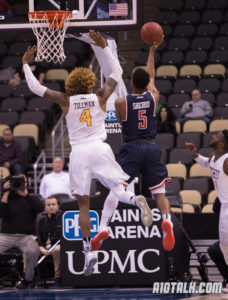 Nick Sherod Richmond– Richmond suffered two big losses to graduation with Cline and Jones and another of sorts with Fore out 4-6 weeks, and likely needing at least another week or two beyond that to get the proper on-court reps, Sherod may be the second or third key cog on the offense with Grant Golden also playing a major role. Sherod’s numbers will rise.

Jermaine Bishop Saint Louis– Bishop was SLU’s leading scorer before an ankle injury ended his season early. Bishop will have to overcome the rust of not playing in a game in nearly a year, and SLU has a lot of new pieces, making playing time tough to solve. If Bishop continues the pace from last season, then he could move his way up into that first team.

Luwane Pipkins, UMass– Pipkins has a new coach and with that brings some unknown in regards to the system, but Pipkins was a double-digit scorer last season and certainly deserved to make one of these lists. I could easily see him making this list very soon.

Jair Bolden, George Washington– Bolden could have made the second list and made great strides this past season. With GW trying to figure out it’s identity beyond Yuta Watanabe, Bolden is a good piece to build around. His is the guard answer to Langevine and Ayeni in a sense but he just missed making this list.

Nick Robinson, Saint Joseph’s– Robinson made 19 starts and averaged just over five points. He warranted consideration because he played in each game and with some injuries, he may be asked to step up again.

Dusan Kovacevic, Davidson– There is not much to go off here, but it seems as if Kovacevic is finally healthy and ready to be a much-needed post presence for this Davidson team. There is a good chance he starts, but otherwise may be the first on the bench.

Zachary Weiss
Zachary Weiss has had a 10 year journalism career, with the past three mainly focusing on Duquesne Athletics and the Atlantic 10.