Halfway to Brooklyn. Time to take a tempo free look at the conference teams as the A10 schedule has reached the midpoint. The efficiency margin is the offensive efficiency minus the defense. Obviously, a positive number, the more the better, is the objective. A negative ‘EM’ is quite problematic. Conference games only are taken into account. Numbers courtesy of Kenpom.com.

Dayton, case closed,  as the leaders. The Flyers post a conference leading and outrageous 115 offensive efficiency. Anthony Grant’s defense is third (94 DE a very good mark) just behind Rhode Island and VCU at 93.

Davidson is better than the 5-4 record indicates. On closer look the Wildcats pace the conference with a 36% mark from beyond the arc. Bob McKillop uses the three to the tune of 44% of his club’s field goal attempts. In an eleven point loss at Rhode Island the Wildcats shot 4 of 23 (17%). At home in a six point setback to Richmond an 8-33 (24%) doomed the hosts. They did shoot 36% (10 of 26) in the four overtime loss at George Washington last week. Sometimes lady luck just isn’t smiling. That loss was Davidson’s only blemish over the last five games.

The Hawk may never die but with a conference low 133 defensive efficiency, it is now on life support.

Fordham is in the top half of the conference in defensive efficiency. The Rams are seventh checking in at 100. On the offensive end they are buried in the basement with an extremely low OE of 84.

In their last three outings LaSalle played VCU fairly close for a stretch then lost heat breakers against St. Louis (in overtime) and at Duquesne. Coach Ashley Howard is working on issues at both ends of the court. The Explorers are at the bottom of the conference in turnover rate (23%) and effective field goal defense (53%). Both factors contributing to a 94 offensive efficiency and 106 on defense.

The time worn adage regarding conference success says win your home games and ‘steal’ a few away from home. According to Kenpom, home teams win 57% of the time in the A10. That puts the conference 18th among the 32 conference. While the proof is there-home games do not guarantee a victory, you would be hard pressed to find a coach who would rather play a key game on the road rather than the comforts of home. 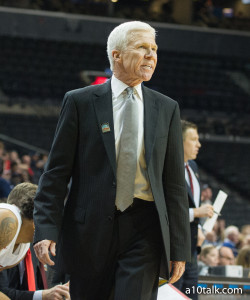