PITTSBURGH, Pa. — The Duquesne Dukes opened their newly renovated arena in front of a full house of fans for the first time Tuesday, defeating the Rider Broncs, 73-61. Prior to the game, the university honored Chuck Cooper, who was the namesake for the newly renovated Cooper Fieldhouse. Cooper’s son, Chuck Cooper III, was there to receive a special commemorative ball from Duquesne. 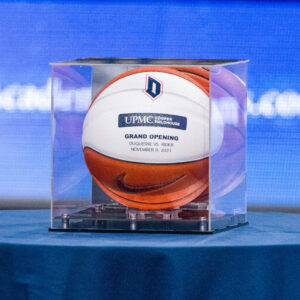 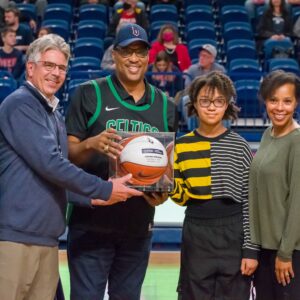 After a sluggish start that saw the Dukes trail by three headed into halftime, Primo Spears and Tre Williams came alive, scoring 10 and 12 points, respectively, in the second half. Each finished with 14 points. Williams added 3 blocks and shared a team-high 6 rebounds with Leon Ayers III.

Dwight Murray Jr. scored 17 points for Rider, with Dimencio Vaughn (13), Mervin James (10), and Corey McKeithan (10) getting into the double digits as well.

The biggest difference between the clubs was beyond the arc. Duquesne shot 40% from beyond the three-point line, converting 12 of 30 attempts. The Broncs managed only two made threes on 16 attempts. Head coach Keith Dambrot talked about the importance of that performance after the game, and how it may be a welcome breath of fresh air for the Dukes to perform that well beyond the arc. When asked what the keys to shooting so well from the three-point line, Dambrot’s answer was as straight as they come: “Better shooters,” Dambrot replied to laughs.

That success was even without some excellent three-point shooters. RJ Gunn, a graduate transfer from D-II Lenoir-Rhyne, was out of the lineup Tuesday with an injury, but Dambrot praised his skills as well.

Overall, Duquesne converted six three-point field goals in each half. After Easley made three of his 6 attempts in the first half and Tyson Acuff added two himself, Easley notched another in the second and was joined by two apiece from Williams and Spears.

While the slow start was certainly a concern, Dambrot has to be pleased with how the group came together at halftime and found a way to win. He mentioned this year’s team is thus far the easiest group of individuals he has ever coached.

“They’re an easy group to work with. In 13 years at Akron, I never had a team like this. I always had six, seven, eight guys back. Maybe my first year here [at Duquesne] is the closest I’ve ever had to experiencing this.”

In any case, the Dukes have win No. 1 under their belt and will look to keep the momentum going against Hofstra on Saturday, Nov. 13 at the UPMC Cooper Fieldhouse. Tip-off is set for 7 p.m.

Ed Major II
Ed Major II is a freelance sports photographer based out of Pittsburgh, PA. In addition to A-10 basketball, he covers other A-10 sports for Duquesne U...