Your Dayton Flyers got it done, somehow, someway, beating George Mason on Saturday afternoon in UD Arena.  Jalen Crutcher finally turned it on and became the guy for the Flyers, scoring a career high 26 points against the Patriots.  Mustapha Amzil turned in another great performance, pacing UD with 15 points of his own.  Ibi Watson came ready to play today with 16 points, 4-5 of those coming from behind the arc.

A few other Flyers pitched in, including Zimi Nwokeji with his first 7 points in a Flyer uniform. Jordy Tshimanga came away with 8 points as well.

It was great to see Dayton respond the way they did after such a disappointing loss to La Salle on Wednesday night. Honestly, after what happened against La Salle, I feared the worst about the Flyers. It just did not seem like they cared about the season anymore, nor did they know how to turn it around. Our other Dayton contributor, Grant Kelly, put it quite simply for all of us, because he seems to be a kid genius of sorts. His pre-game tweet stated thus: 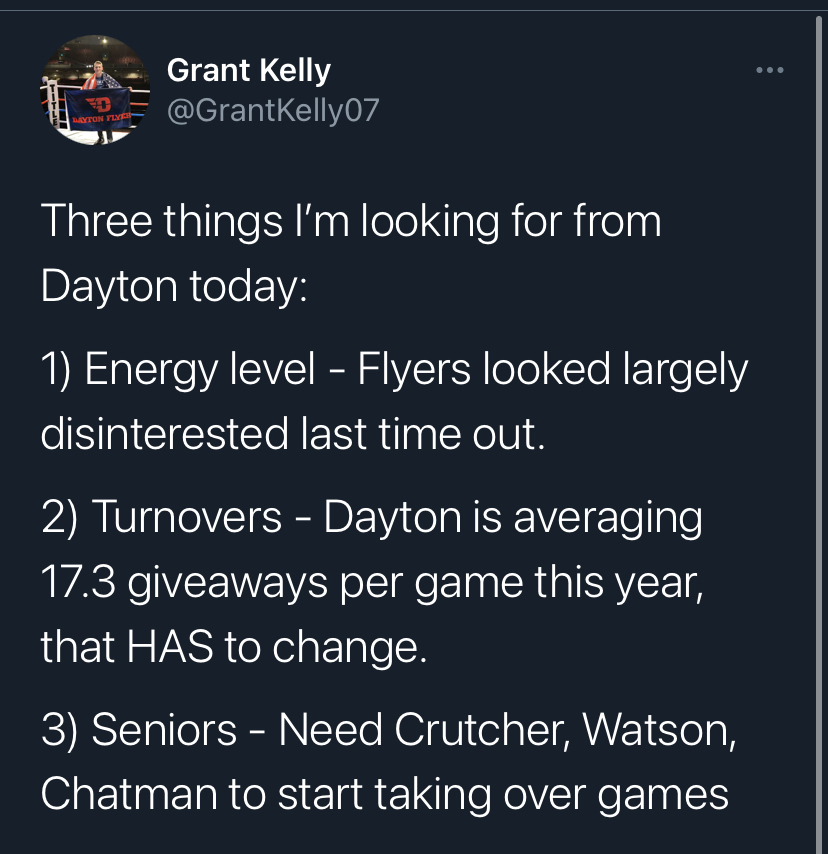 I felt the same as Mr. Kelly about this team, and I really didn’t have much confidence that it was going to turn around any time soon, especially since Chatman was the latest Flyer to be out of the lineup.

For one, the energy was mostly there this time around. I will cut the team a little slack because playing 40 minutes every game knowing there is literally no one else who can contribute behind you is tiring. You have to play smart but also keep up the intensity all game long. It felt like Crutcher, Ibi, and Mustapha all did that throughout the game. These were the three that played the most minutes.

Turnovers were quite honestly the most annoying part about this team with all the seniors they were bringing back. Dayton only turned the ball over 12 times against Mason, a HUGE step in the right direction. Still, it’s quite frustrating when your two main guys in Crutcher and Watson had three turnovers each. Whatever, I’ll take 12 and run.

Finally, we have complained over and over again as a fan base that the big three of Crutcher, Watson, and Chatman need to take over. When Chase was still on the team, we knew he needed to be a main scorer as well. With Chatman out with an injury for an unknown amount of time, Crutcher and Watson absolutely needed to take control or it would get ugly. They finally did this time as opposed to the game against La Salle.

Luckily for the Flyers, an angel broke through the ice sculptures of Helsinki, Finland, into Dayton, Ohio, to save the day.. Not enough can be said about how important Mustapha Amzil is right now for the Flyers. I know he is a good scorer, but the other numbers he puts up are astounding as well. Against La Salle, he tied for the team lead in rebounding with 7.  Not bad for an opening night game for a freshman. Against George Mason, Amzil brought down another 6 rebounds, tied with Zimi (shoutout to him for finding another way to contribute). Along with rebounding, Amzil put up 4 assists and 3 steals. The guy seems like he can do a little of everything along with putting up double figures on the scoreboard. It’s almost as if he is destined to be the next great glue guy in Dayton Flyer basketball history.

Up next for the Flyers is the Fordham Rams on the road at Rose Hill Gym in the Bronx. Fordham ain’t doing so hot right now, so this should be a game for the guys like Amzil, Sissoko, Brea, and Nwokeji to get some major minutes and get Crutcher and Watson some rest during games for once. This game should be a breath of fresh air and result in the Flyers going to 2-1 in conference play. See you Tuesday evening!